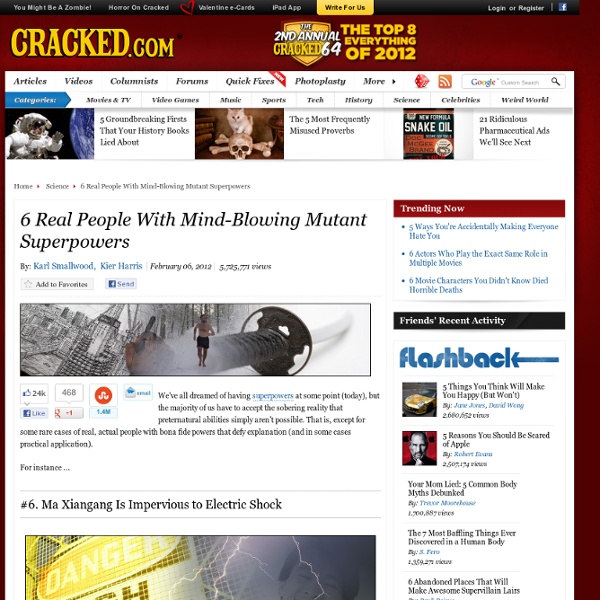 If the insane, explosive popularity if superhero movies is any indication, we are fascinated by people who are insanely better than us at any given thing. Probably because, in real life, we're all such a bunch of incompetent boobs that we've been enslaved by blue paint, flashing lights and crying French babies. But it turns out, superpowers are real. And not just the secret ones that everyone has, or even the ones everyone thinks they have -- this Cracked Classic is about a group of people that, in a sane world, would already have multi-colored leather jumpsuits, delightfully mismatched personality traits and a skyscraper shaped like whatever they decide to call themselves. We've all dreamed of having superpowers at some point (today), but the majority of us have to accept the sobering reality that preternatural abilities simply aren't possible. For instance ... #6. As with most superpower discoveries, Xiangang found his by acting like a braying jackass. So What's Going on Here? #5. #4.

Related:  in between two worlds

10 Ways to Raise Your Vibrations All your thoughts and feelings are energy, and energy is vibration. Learn to Raise those Vibrations and watch your life change dramatically. 1. Find something beautiful and appreciate it. 60 Tips For A Stunningly Great Life!! I want to shift gears from leadership to a pure focus on crafting an exceptional life. Ultimately, life goes by in a blink. And too many people live the same year 80 times. Top 100 Photos of the Year 2012 *Please note the photographs themselves were not necessarily taken in 2012, they just happened to be featured as a POTD this year. The pictures are also listed in reverse chronological order. There is no ranking amongst the photos Enjoy! Photograph by Robert Elves on Flickr Photograph by Stephen Wilkes | Prints available

7 Theories on Time That Would Make Doc Brown's Head Explode There are a few things in this world that we can always rely on as constants: The sun will always rise each morning, the seasons will always change and time will inevitably march forward at its predictable clip. Except the sun doesn't actually rise, seasons are disappearing and time ... well, see, time is tricky, too. For example ... #7. We May Not Live in the Present Scientists Prove DNA Can Be Reprogrammed by Words and Frequencies By Grazyna Fosar and Franz Bludorf THE HUMAN DNA IS A BIOLOGICAL INTERNET and superior in many aspects to the artificial one. Russian scientific research directly or indirectly explains phenomena such as clairvoyance, intuition, spontaneous and remote acts of healing, self healing, affirmation techniques, unusual light/auras around people (namely spiritual masters), mind’s influence on weather patterns and much more. In addition, there is evidence for a whole new type of medicine in which DNA can be influenced and reprogrammed by words and frequencies WITHOUT cutting out and replacing single genes.

IdeaPaint: Turn Your Entire Office Into a Whiteboard Why didn't you think of this? John Goscha, at the ripe old age of 25 ditched a job offer at Goldman Sachs, and instead began marketing IdeaPaint, which is simply a paint that turns any paintable surface into a dry-erase board. The benefit--besides being able to brainstorm on almost every inch of your office--is that the paint is half the cost of whiteboard and better-performing--you can leave marks up indefinitely, and they won't stain the wall. The Lion Whisperer Toronto Star Picture Editor Wanda Goodwin shares these delightful images of Kevin Richardson a.k.a "The Lion Whisperer." A new film opening soon in The United States about a rare white lion who escapes becoming a trophy on a wall, is a rare happy ending in a country where more than 1,000 lions are killed legally each year. Kevin Richardson, the man behind the movie, calls himself an "ambassador of lions" and hopes the film will act as one too at a time when foreign tourists are willing to pay up to $40,000 to shoot a big cat. Kevin Richardson, a.k.a. the Lion Whisperer lays with two of his lions on October 11, 2010, in their enclosure at the Kingdom of the White Lion park in Broederstroom, South Africa. (AP Photo/Denis Farrell) Kevin Richardson sprays his lions with water and citronella in their enclosure.

Total Green Goodness Smoothie The following article was written by Kristina Carrillo-Bucaram. Feeling a little tired? Maybe you need a green infusion! Drinking greens is like breathing oxygen. 70 Reminders to Help You Break Any Barrier I am pleased to introduce this guest article by a new friend John, the creator of HiLife2B, where he hopes to inspire people and to help them achieve their dreams. Follow him on Twitter: @janyasor 1. Believe that even the smallest compliment can save someone’s life 2. Remember that one person can change an entire nation The Transformation of our DNA is Leading Us To Universal Truths We have been stuck in a Universal Time Matrix that has been disconnected from higher dimensional frequencies for thousands of years. Our DNA is finally catching up and breaking through restraints which have halted our progress. Somehow, we've agreed to do all of this to ourselves. However, humans will soon know and understand why 97% of our DNA has a higher purpose and why its transformation is leading us into an awakening that we never could have imagined.

The Best Science Fiction Books (According to Reddit) Recently, someone asked Reddit for a list of the best science fiction books of all time. Being a fan of sci-fi, and wanting to expand my own reading list, I thought it would be helpful to tally the results and preserve them here for future reference. I've also included selected quotes from the comments, as well as my own notes on the books I've already read. PS: All book images in this post are copyright Amazon, and were retrieved using my Big Book Search Engine. So, without further ado, here are the Greatest Sci-Fi Books of All Time, ordered by upvote count: How Famous Companies Got Their Names Ever wondered about how famous brands got their names from? Here are a couple of explanations. Via

The Amazing World Of Dogs In Photography Husky sleeping at red flower field. Photo by: Peter Przybille Do you love my wrinkles? Shar Pei close-up. Photo by: Tim Flach How To Actually Win A Fist Fight Ok, well, with the response from yesterday's post, I felt compelled to go ahead and do this. Without further ado: You know it has to be said, first sentence, first paragraph: the best way to win a fist fight is not to get into one in the first place. No shit, sherlock. Every single mens magazine who has ever attempted to publish an article like this has started (and ended) exactly that way and is usually devoid of any real information - sometimes because someone on the editorial staff wanted to avoid putting the periodical at risk for a lawsuit; other times because the author has absolutely no clue what they’re talking about, so they cop out with this “Verbal Judo Wins The Day!” crap.