Eye Direction and Lying - How to detect lies from the direction of an individual's gaze / visual accessing cues. 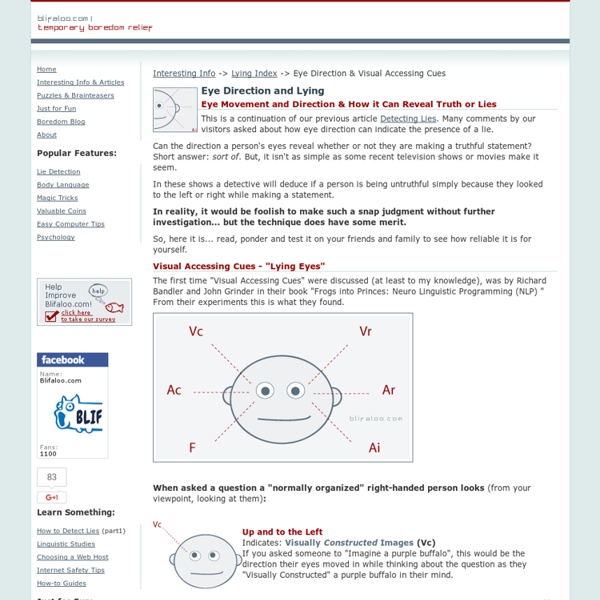 Interesting Info -> Lying Index -> Eye Direction & Visual Accessing Cues Eye Movement and Direction & How it Can Reveal Truth or Lies This is a continuation of our previous article Detecting Lies. Many comments by our visitors asked about how eye direction can indicate the presence of a lie. Can the direction a person's eyes reveal whether or not they are making a truthful statement? Short answer: sort of. In these shows a detective will deduce if a person is being untruthful simply because they looked to the left or right while making a statement. In reality, it would be foolish to make such a snap judgment without further investigation... but the technique does have some merit. So, here it is... read, ponder and test it on your friends and family to see how reliable it is for yourself. Visual Accessing Cues - "Lying Eyes" When asked a question a "normally organized" right-handed person looks (from your viewpoint, looking at them): The Gist of it... How this information is used to detect lies:

What Is an Avatar Master? Yesterday I had lunch with someone I met through a social networking web site, who bills himself as an “Avatar Master.” Before meeting with him, I did a tiny bit of research on the net, saw that Avatar is some form of spiritual training, and didn’t think much of it. The gentleman was pleasant to talk with, and we had a nice enough lunch. I quickly gleaned it is important to him that other people sign up for the same Avatar courses he has taken. I asked him if the Avatar organization was ever accused of being a cult, to which he replied, “Yes, in France. They accused us of being a cult in France.” Body Language Basics - Syncrat Publishing Throughout history it has been an advantage if an individual can read body language. Body language helps in everyday life from closing a business deal or trusting someone with your life, to recognising when someone is upset. Body language is the art of making an educated guess at a person’s feelings or intentions based on their posture, movement and positioning.

Body Language and Flirting - Blifaloo Interesting Info -> Body Language -> Flirting Body Language (part 1) Quick Jump: General Signs of Flirting | Male Flirting | Female Flirting Also See: Body Language Resources | Decoding Male Body Language Updated March 21st - 2012. New resources, information, books and links added. Only 7% of communication is verbal communication. How to detect bullshit By Scott Berkun, August 9, 2006 Everyone lies: it’s just a question of how, when and why. From the relationship saving “yes, you do look thin in those pants” to the improbable “your table will be ready in 5 minutes”, manipulating the truth is part of the human condition. Accept it now. I’m positive that given our irrational nature and difficultly accepting tough truths, we’re collectively better off with some of our deceptions.

Map of Consciousness A Powerful Framework For Your Personal Growth In this article, I’m very excited to share with you the map of consciousness, developed by Dr. David Hawkins in Power vs Force. This is the same map I alluded to in Are You Sleepwalking Your Life Away? Part 2 post. The reason I’m so excited is because this map is probably the single most powerful tool in your pursuit for personal growth and excellence. Briton held at West Bank protest A British man is facing deportation after being arrested in Tel Aviv during a demonstration against Israel's West Bank barrier. The 34-year-old from London was held at a sit down protest in the road outside Israeli military headquarters. Friends say the man, who is not being named, had flown out to show his opposition to the West Bank barrier.

25 Acts of Body Language to Avoid Our body language exhibits far more information about how we feel than it is possible to articulate verbally. All of the physical gestures we make are subconsciously interpreted by others. This can work for or against us depending on the kind of body language we use. Micro Expressions - Research, Theory & Lying Interesting Info -> Lying Index & Body Language -> Micro Expressions Is the show "Lie to Me" for real? I am not a police interrogator, scientist, or other expert...