120 Ways to Boost Your Brain Power 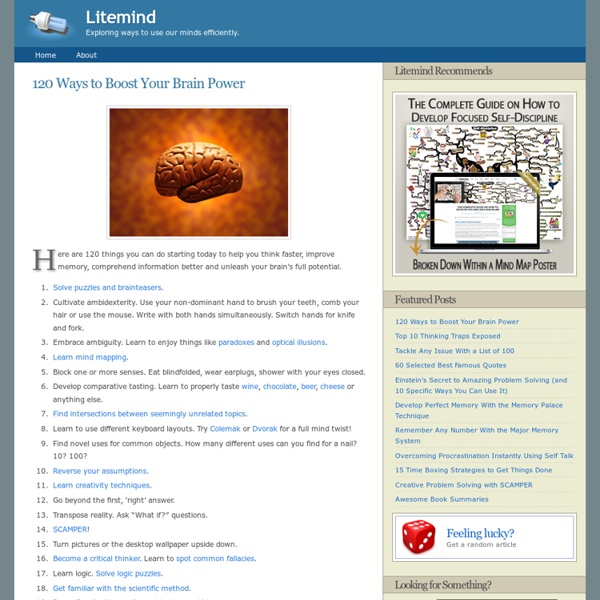 Here are 120 things you can do starting today to help you think faster, improve memory, comprehend information better and unleash your brain’s full potential. Solve puzzles and brainteasers.Cultivate ambidexterity. Use your non-dominant hand to brush your teeth, comb your hair or use the mouse. Write with both hands simultaneously. Switch hands for knife and fork.Embrace ambiguity. Learn to enjoy things like paradoxes and optical illusions.Learn mind mapping.Block one or more senses. Readers’ Contributions Dance! Contribute your own tip! There are many, many ways to keep our brains sharp.

7 Skills To Become Super Smart People aren’t born smart. They become smart. And to become smart you need a well-defined set of skills. 20 Super Brain Foods We know that the foods we eat affect the body but they can have even more influence on how well our brain functions. What we eat can have a POWERFUL affect on our brain’s energy, how the mind handles tasks, and our general mood. Our focus here is on those particular nutrients found in foods that enhance neuron firing and cross-linking in the brain.

What is Mind Mapping? (and How to Get Started Immediately) A mind map is a graphical way to represent ideas and concepts. It is a visual thinking tool that helps structuring information, helping you to better analyze, comprehend, synthesize, recall and generate new ideas. Just as in every great idea, its power lies in its simplicity. In a mind map, as opposed to traditional note taking or a linear text, information is structured in a way that resembles much more closely how your brain actually works. Since it is an activity that is both analytical and artistic, it engages your brain in a much, much richer way, helping in all its cognitive functions.

Personal Goal Setting - Goal Setting Tools from MindTools Planning to Live Your Life Your Way Learn how to set effective personal goals. Many people feel as if they're adrift in the world. They work hard, but they don't seem to get anywhere worthwhile. A key reason that they feel this way is that they haven't spent enough time thinking about what they want from life, and haven't set themselves formal goals. The Good Guy Contract Twenty years ago, the first woman I ever loved broke my heart. Like many break ups, the end came in stutters and sine waves rather than as an abrupt but mercifully irreversible amputation. However, for reasons I couldn't understand yet quickly began to resent, my ex-girlfriend continued to ask favors of me. And I continued to grant them. Then one morning while chanting I found myself ruminating about how inappropriate it was of her to keep asking, and the more I thought about it, the more irritated I became.

Why Atheism Will Replace Religion: New Evidence Atheists are heavily concentrated in economically developed countries, particularly the social democracies of Europe. In underdeveloped countries, there are virtually no atheists. Atheism is a peculiarly modern phenomenon. Why do modern conditions produce atheism? In a new study to be published in August, I provided compelling evidence that atheism increases along with the quality of life (1). The Now Habit In this post, I present a mind map with the full summary of the book The Now Habit: A Strategic Program for Overcoming Procrastination and Enjoying Guilt-Free Play. Despite a cover that reminds me of the “remarkable” Windows 3.1 ‘Hot Dog Stand’ color scheme, I don’t have much to say about The Now Habit other than it’s one of the most useful books I’ve ever read. Since its publication back in 1988, it has become well-known among chronic procrastinators looking for ways to overcome this crippling condition, and for very good reasons. The Procrastination Habit As the title of the book suggests, procrastination is a habit — it’s not caused by lack of organization or lack of time management skills. If you’re looking for time management tools as a way to overcome procrastination, I suspect you may be getting yourself just another set of toys to play while you procrastinate.

Creative Problem Solving with SCAMPER SCAMPER is a technique you can use to spark your creativity and help you overcome any challenge you may be facing. In essence, SCAMPER is a general-purpose checklist with idea-spurring questions — which is both easy to use and surprisingly powerful. It was created by Bob Eberle in the early 70s, and it definitely stood the test of time. In this posting, I present a complete SCAMPER primer, along with two free creativity-boosting resources: a downloadable reference mind map and an online tool that generates random questions to get you out of a rut whenever you need. SCAMPER Primer

Related:  jaylucchesi • productivity
Related:  kpjete   -  Brain Plasticity; Ways to change you   -  Study Guides and Strategies   -  Eye Direction and Lying - How to detect lies from the direction of an individual's gaze / visual accessing cues.   -  How to Study Less by Learning Things Once   -  Build Brain Power with these 21 Resources   -  The International Phonetic Alphabet - Audio Illustrations   -  Home Page   -  Personal Development - Freestyle Mind   -  Zap of electricity makes you a brighter spark - Telegraph   -  Scientific Learning Global   -  Math Run - Mathgame - how fast are your Math skills? A simple Math Training Game for everyone   -  Reinventing Brain Health: Market Research at the Frontier of Digital Innovation & Neuroplasticity   -  Oscillatory Thoughts: The neuroscientific study of hallucinogens   -  Embodied Cognition [Internet Encyclopedia of Philosophy]   -  Out of Our Brains - NYTimes.com - NYTimes.com   -  The Extended Mind   -  10 Websites With Fun Tests To Gauge Your IQ   -  Drunkest Guy Ever Goes for More Beer Video - Video   -  How to Become A Social Badass | High Existence   -  Detect Lies Like LIE TO ME! - Scam School - YouTube   -  The Elder Brothers Warning (Kogi Tribe) - YouTube   -  Earthships 101 part II - YouTube   -  Social Bookmarking | Common Craft   -  Psst! The Human Brain Is Wired For Gossip : NPR   -  Is Neuroscience the Death of Free Will? - NYTimes.com - NYTimes.com   -  100 of the Most Inspiring Business Videos on YouTube   -  How to Adopt a Polyphasic Sleep Schedule: 4 Steps (with Pictures)   -  20 Basic Illustrator Tutorials Every Beginner Should See