Quick Guide to Every Herb and Spice in the Cupboard 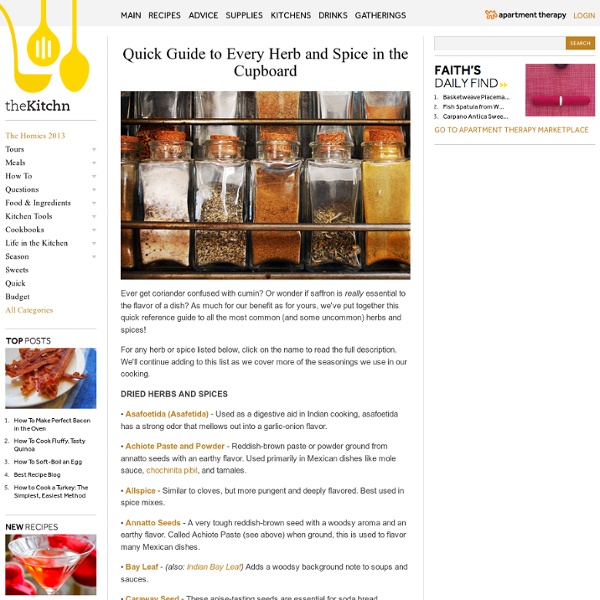 Ever get coriander confused with cumin? Or wonder if saffron is really essential to the flavor of a dish? As much for our benefit as for yours, we've put together this quick reference guide to all the most common (and some uncommon) herbs and spices! For any herb or spice listed below, click on the name to read the full description. We'll continue adding to this list as we cover more of the seasonings we use in our cooking. • Asafoetida (Asafetida) - Used as a digestive aid in Indian cooking, asafoetida has a strong odor that mellows out into a garlic-onion flavor. • Achiote Paste and Powder - Reddish-brown paste or powder ground from annatto seeds with an earthy flavor. • Allspice - Similar to cloves, but more pungent and deeply flavored. • Annatto Seeds - A very tough reddish-brown seed with a woodsy aroma and an earthy flavor. • Bay Leaf - (also: Indian Bay Leaf) Adds a woodsy background note to soups and sauces. • Cardamom - This warm, aromatic spice is widely used in Indian cuisine.

encyclopedia of spices Spice Advice – how to make the most of spices, which spices to use with particular foods, when to add them, grinding, storage and more. Herbs and Spices Fight Disease — Most of us look at spices as a way to perk up the plate but are you aware of their potential to fight disease? Look here for some recent findings. All about Vanilla – and then some… history, curing, varieties, vanilla extract, essence, powder – even vanilla salt. How to cook with vanilla. including top 10 vanilla recipes!

Pepsi's lawyers say Mountain Dew can dissolve a mouse (NaturalNews) While drinking Mountain Dew, have you ever seen (or perhaps felt on your tongue) a thick, jelly-like substance? Maybe you assumed the ingredients in the soda had gelled. According to Mountain Dew manufacturer Pepsi, you may have been ingesting some extra protein with your beverage in the form of a liquified rodent.An Illinois man is suing Pepsi, claiming he found a mouse in his can of Mountain Dew. Ronald Bell of Edwardsville, a small town near St. Louis, alleges there was a mouse in a can of soda he purchased and drank in 2009.

How to Make Flour Tortillas: 9 steps (with video) User Reviewed Community Q&A Have you ever had a craving for those delicious tortillas made fresh in restaurants? Below is an easy and quick way to make flour tortillas from scratch! You'll need to mix the dough, flatten it into rounds and cook each one on the stove to create delicious tortillas perfect for filling with taco meat or veggies. How to eat wild stuff and not get poisoned (how-to) Let's play pretend for a moment. Are you with me? Let's pretend you can't go down to the supermarket for food to eat. In fact, let's pretend that there is not a supermarket for one hundred miles in any direction, and you don't have any food with you. In this pretend land, you are stranded in the wilderness. Perhaps your GPS navigation unit directed you to detour onto a closed mining road in the middle of nowhere, and you didn't have the sense to second-guess it until your rental car got stuck in seasonal mud, and you decide to head out into the woods instead of following the road back.

A Culinary Tour of the US: 12 All American Foodie Picks Posted by Katie on Thursday, September 12, 2013 · 5 Comments The melting pot ethos of the U.S. has helped create some fantastic regional culinary delights. No matter where you visit, there’s bound to be a famous regional dish. Easy Chicken Burritos Chicken Burritos I made a roasted chicken over the weekend, and after enjoying it on the first day, I’ve been trying to come up with a more innovative recipe than just a simple sandwich. When I spotted some leftover tortillas in the fridge, I instantly thought of finally making my own homemade burritos. One of my embarrassing, guilty pleasures are those cheap, frozen burritos. I don’t know what it is about them, besides the fact they are loaded with fat, but I have loved them for years. I knew yesterday when my craving hit, it was finally time to give them up, and create a recipe to curb my cravings that was more healthy and much lower in fat.

Jamie Oliver: Victory as McDonald's stops using 'pink slime' in its burger recipe TV chef was disgusted to discover ammonium hydroxide was being used by McDonald's to convert fatty beef offcuts into a beef filler for burgers'Why would any sensible human being want to put ammonia-filled meat into their children's mouths? asked Jamie Oliver McDonald's denies its hand had been forced by TV campaign By Jill Reilly Updated: 11:05 GMT, 27 January 2012