Solar, Hydro and Wind Systems for your home 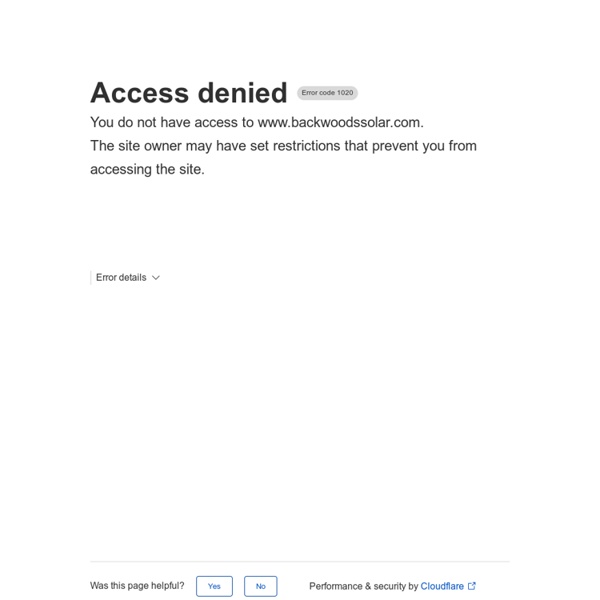 Rocket Mass Heaters: Heat Your Home For Less Rocket mass heaters are an innovative cross between a rocket stove and a masonry heater. Using a tenth less fuel that a conventional woodburner, a rocket mass heater converts the burn of hot gases that rise from the fire into heat, as well as the heat from released steam and carbon dioxide. The rocket mass heater is an efficient and clean method of heating your home. How it Works Sticks placed vertically in the stoke hole burn from the bottom. Efficiency Rocket mass heaters use only about one tenth of the wood that a conventional wood burning stove would to achieve the same room temperature. Different Styles Cob style A cob style rocket mass heater is 'the old reliable'. Pebble style The difference with these is that the mass is usually a wood bench filled with pebbles and rocks. Shippable core This is the main system of the rocket stove as one piece of equipment, making it even easier for people to build their own. The ring of fire Further resources Watch: Rocket stove kitchen Horizon rocket stove

Polmedia Polish Pottery - Handcrafted Stoneware from Boleslawiec Poland. Get off-grid & emergency power from this solar briefcase & battery packs : TreeHugger The HANS Solar Briefcase and PowerPack systems do double duty by supporting the Billions in Change movement. We've come a long way in terms of remote and emergency power options over the last ten years, having gone from relying almost completely on gas or diesel generators and boxes of single-use batteries to solar chargers and rechargeable batteries for supplying electricity, and from gas lanterns to LED lights for illumination, which is good for the average camper or emergency preparedness kit. When I think of how many 'disposable' batteries I used over the course of my life, before I started buying rechargeable batteries and powerpacks that I could recharge with solar power, it adds up to a staggering amount of waste. "The HANS™ Solar BriefCase is a lightweight, portable, and simple-to-use set of solar panels designed for charging the HANS™ PowerPack from virtually anywhere on Earth.

b Rocket Ovens Cob rocket ovens combine the efficiency of rocket stoves with the joy of cob ovens. They can be fired up in just 15 minutes (instead of an hour or more with a convention cob oven) with a small bunch of kindling and be ready to bake soon afterwards. You get the delicious taste of a cob oven but all the benefits of an energy efficient rocket stove as they require little fuel and are ready to cook very quickly. These stoves are ideal for smaller, faster baking sessions. Flip and Jon Anderson explain the potential and principles of cob/mud rocket ovens. This is a great evolution of the rocket stove concept and now you can use these principles and have an oven for baking too. This video is based on a talk given on Rocket Ovens at the 2015 ETHOS Stove Conference in Kirkland, WA. Further resources How to make an outdoor brick oven from recycled material Rocket stove kitchen Exclusive content and FREE digital access to over 20 years of back issues

How to Pick Out a Safe Set of Cookware Being into the whole real food thing is tough. You gotta dissect labels for toxic ingredients, trudge off to an actual farm to get food, spend hours slaving away in the kitchen every week, and you don’t have the luxury of picking up an easy frozen meal at a normal grocery store and firing it up in the microwave when you don’t feel like cooking. Oh but it doesn’t end there. You also have to worry about whether or not the pots and pans that you cook all that healthy food in are killing you. That nonstick skillet you whipped up many a Hamburger Helper with in years past must not be touched. Your trusty old aluminum baking sheets aren’t so trustworthy anymore. So, then you have to shell out all kinds of cash for more expensive, non-lethal cookware. What’s wrong with nonstick? Weell… that’s kind of a long story. Nutshell version? Of course, those alternatives can be pretty spendy. Types of Healthy Cookware Stainless steel. Now, let’s pick out some pots and pans! Ooh, la la. Miscellaneous

Off-Grid Home | Solar Panels | Backwoods Solar Your own independent off grid power systems can provide most electric conveniences at a remote home site, where bringing in utility lines would be impossible or prohibitively expensive. Just extending utility power 1/4 mile or more to reach a home site can cost $15,000 and up, and that's before you get any power. Equipment to produce your own solar electric power may cost less. If power lines are not near your land, you can choose clean renewable resources, and boats and recreational vehicles can use the same equipment on a smaller scale. Natural and free energy already on your site in sunlight, wind, or falling water can be converted to off the grid electricity. We Use Off-Grid Power! For over 30 years, Backwoods has specialized in off-grid power for the remote home. Our off-grid power catalog introduces beginners to the joy of making your own power. An Independent natural power system typically produces just 10 to 25% of the electricity consumed by a utility powered American home.

oking Efficiently: 3-stone fires, biomass & hobs Despite technological advancements since the Industrial Revolution, cooking remains a spectacularly inefficient process. This holds true for poor and rich countries alike. While modern gas and electric cooking stoves might be more practical and produce less indoor pollution than the open fires and crude stoves used in developing countries, they are equally energy inefficient. In fact, an electric cooking stove is only half as efficient as a well-tended open fire, while a gas hob is only half as effective as a biomass rocket stove. Present-day cooking methods in poorer countries are quite well documented, as they are one of the main concerns of NGOs which promote appropriate technological development. The most basic and widely used type of cooking device is the wood-fuelled 'three-stone fire', which is made by arranging three stones to make a stand for a cooking pot. Inefficient biomass stoves also force people (again, most often women) to spend much of their time collecting fuel.

What Are The Best Ceramic Knives? - Best Chef Kitchen Knives There are many different varieties of kitchen knives in today’s culinary world all made differently and with different materials. Trendy ceramic knives are the latest knives on the block; these knives look great and hold a razor sharp edge extremely well. Ceramic knives are very lightweight compared to the stainless steel counterparts, super razor sharp, and the actual knife compound is around 50% harder than traditional stainless steel kitchen knives. A ceramic knife is a great knife for doing basic kitchen prepping like chopping or dicing vegetables; however these knives cannot really tackle the hardier kitchen tasks like de-boning, carving, cutting up frozen food, or even slicing cheese for this reason a ceramic knife will never replace the traditional stainless steel kitchen knives. A Selection of the Best Ceramic Knives How Do They Make Ceramic Knives? Ceramic knives are made out of very hard and tough ceramic substance called Zirconia. 3 Ceramic Knives Reviewed click for pricing

Living Off the Grid: How to Generate Your Own Electricity Our off the grid house near Anaconda, Montana Taking the Alternative Energy Plunge When my wife and I moved to Montana last year, we found a comfortable home on several acres with a view of the mountains. That doesn’t mean it was primitive. Solar panel with tracker Life Off the Grid The previous owner showed me the critical facilities and told me how to operate them. On our third night in the house, we went to bed as usual to the faint sound of wind outside, a sound we were already beginning to enjoy because it generated most of our power. Wind turbine I got up and went outside to check the power equipment. I had just learned the first lesson of wind and solar power: they can’t always be counted on when you need them. Battery bank Alternative Energy Cost Since then, I’ve learned the second lesson of renewable energy: while the energy may be free, it still costs more than electricity from a utility company. Electrical inverter/charger Backup Generator Backup generator Lessons Learned

A fully transparent solar cell that could make every window and screen a power source - ExtremeTech Researchers at Michigan State University have created a fully transparent solar concentrator, which could turn any window or sheet of glass (like your smartphone’s screen) into a photovoltaic solar cell. Unlike other “transparent” solar cells that we’ve reported on in the past, this one really is transparent, as you can see in the photos throughout this story. According to Richard Lunt, who led the research, the team are confident that the transparent solar panels can be efficiently deployed in a wide range of settings, from “tall buildings with lots of windows or any kind of mobile device that demands high aesthetic quality like a phone or e-reader.” Scientifically, a transparent solar panel is something of an oxymoron. Solar cells, specifically the photovoltaic kind, make energy by absorbing photons (sunlight) and converting them into electrons (electricity). To get around this limitation, the Michigan State researchers use a slightly different technique for gathering sunlight.

Solar Oven Society What You Need to Go Off the Grid - dummies By Rik DeGunther Off-grid solar PV systems are expensive, so find any means you can to reduce the energy requirements. Most off-grid houses use a wide range of energy resources, in sharp contrast to the typical all-electric suburban home. Off-grid solar electrical systems all use the same basic components, with other elements added according to need. Here are the functions of each part: Charge controller: The charge controller feeds current into the battery bank at the required voltage. Which type of current you choose depends on what you want to run. DC, which is more efficient because batteries use direct current, is usually the choice for small cabins and small power systems. After you install a PV intertie system, you can completely ignore it for the most part. But when you install a system with batteries, you have to stay on top of things.

The Earth Shelter - Green Homes People travel to The Farm Community in Summertown, Tennessee because it has one of the largest concentrations of "green" construction and energy efficient homes and commercial buildings you will find anywhere. One of the most innovative and ambitious examples of green construction on The Farm in recent years is an “earth shelter.” It was originally built to house as office space for one of the community’s members, and is now serving as a place for women coming to The Farm to have their baby delivered by one of the community's midwives. The back and sides of the structure are submerged into the side of a hill, using the thermal mass of the earth to insulate and regulate temperatures inside the building. These three walls are built from cinder blocks filled with concrete and rebar (more mass) that have been properly treated to eliminate moisture from passing through to the inside. The south face of the building is made primarily of glass.