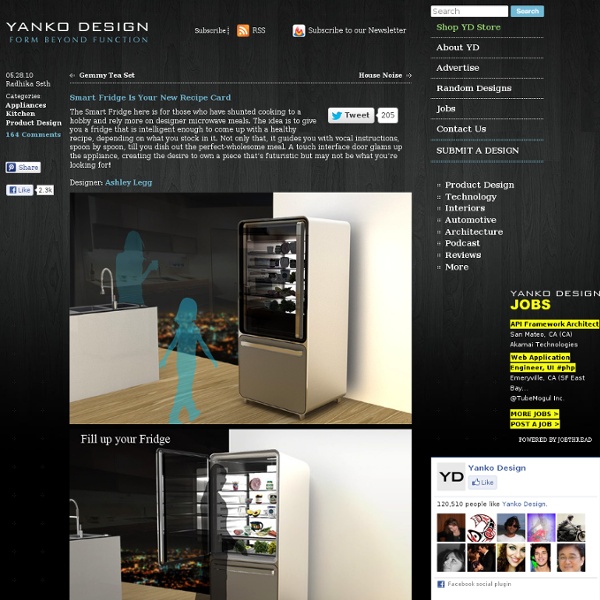 Smart Fridge Is Your New Recipe Card The Smart Fridge here is for those who have shunted cooking to a hobby and rely more on designer microwave meals. The idea is to give you a fridge that is intelligent enough to come up with a healthy recipe, depending on what you stock in it. Not only that, it guides you with vocal instructions, spoon by spoon, till you dish out the perfect-wholesome meal. A touch interface door glams up the appliance, creating the desire to own a piece that’s futuristic but may not be what you’re looking for! Designer: Ashley Legg

Kitchen Cabinet by He Ruimin My Kitchen Is A Cabinet! Really No Kidding, but if I were to listen to He Ruimin then my kitchen would be just a cabinet with everything imaginable within it. Refrigerator, electric cook top, garbage bin, storage, and indicator lights on the fridge and stove to warn me about hot and cold surfaces! Good for the LOHAS gang, this concept makes me smile and frown.

This Prototype Hoverbike Could Land In A Year! » MTV Geek It was bound to happen sooner or later and we’re so happy it finally has. An Australian man by the name of Chris Malloy has built a functioning prototype of what can only be called a Hoverbike. It may not be the Speeder or Swoop bike Star Wars had us fantasizing about all these years, but there’s no denying the cool factor. According to a recent article over at Gizmag, the Hoverbike sports an 1170cc 4-stroke engine. Its 10-feet long, weighs 231 lbs and will supposedly travel 92 miles on a single tank of gas. Malloy still has a lot of work ahead of him and he is currently looking for investors to help get his Hoverbike off the ground. Another interesting thing the Hoverbike has going for it is the ultralight rating. What do you think?

LED Lights Make Augmented Vision a Reality | Elemental LEDucation - StumbleUpon LED Lights Make Augmented Vision a Reality Okay, this is just freaky. We know LED lights are versatile enough to be used for practically anything, but LED contact lenses? Once miniature green LEDs are developed (and they’re in the works, as of now), full color displays will be possible. Lead researcher Babak Parvis comments “You won’t necessarily have to shift your focus to see the image generated by the contact lens,” it would just appear in front of you and your view of the real world will be completely unobstructed when the display is turned off. Ah, the real world. Thanks to Extreme Tech for the quote and Trendhunter for the images. By the way, these freaky LED contact lenses may still be a product of the future, but a lot of cool LED products are of the present!

Instant dishwasher Not Your Typical Dishwasher Most dishwashers are the size of a washing machine, taking up as much space. What if you are a small family unit or a singleton? Designer: Robert Lange In Collaboration With Bosch 7 Must See Strangest Gadgets First time here? I hope you'll consider subscribing via RSS or email (it's free). Thanks for visiting! Flying Alarm Clock Find it hard to wake up in the morning? This clock should definitely get you on your feet. Be warned. SatuGo Bouncing Digital Camera Imagine combining your love for bouncing balls and your obsession with taking pictures into one. Traveller’s T-shirt While not exactly a gadget, it can be very useful for those who often travel to places where you don’t know to speak the native language. Brief Safe A safe way to store cash and other valuable. Day Clock This is the weirdest of them all. Infant “Hand” Pillow Sometimes babies wake up the moment they are laid to bed. Transparent Toaster Have you ever rushed to get things done and in the process ended up burned your toast?

Zelda Capital - Zelda Sheet Music The following is sheet music based on The Legend of Zelda series. They were found various places, but some of them were converted by our staff member, 56k_Warning, so please email before using these elsewhere. The majority of them are in Adobe's PDF format. NEW! Dreamfarm Clongs Eat Regular Tongs for Breakfast Never fans of the “if it ain’t broke don’t fit it” mindset, Dreamfarm sets out to take everyday things you wouldn’t think twice about and turn them into something incredible. This time they’ve improved upon an already highly functional kitchen utensil: tongs. You may have never once thought to question your trusty tongs, but Dreamfarm Clongs make the flaws glaringly obvious. First off all, tongs make a mess all over the counter, which isn’t exactly sanitary. Clongs fix this problem with a sit up design that keeps its silicon food safe tips from touching anything other than your food.

This Hammock Tent Is Like a Swanky Hanging Three Bedroom Apartment Strange Red Wine Glasses Set or Bloody Brilliant Design? « Dornob It is hard not to notice the visual similarity between red wine and blood, but this one-of-a-kind set of wine glasses and decanters plays up this colorful relationship in a creative (if disturbing) way. Though the shape is playful and humorous the craft reflects training in the creation of fine crystal. The heart-shaped drinking glass is perhaps the most amusing as well as dynamic piece in the set, each valve filling together from the center. This limited-edition, hand-blown glassware set by Etienne Meneau has other funky objects as well outside of the drinking glass shown above, including large custom decanters that similarly fill up along variegated veined lines that converge only toward the top. Because these do not fill from a central point they can fill and empty in strange ways and at different rates, making the experience of pouring into and out of them part of the fun of using them.

10 Most Best Wearable Gadgets There were times when one single technology covered the space of a whole room. In this era of revolution, the sizes of technological gadgets has shortened tremendously. Thus a lot of accessories pertaining to wear ability have been around. A wide variety of such gadgets starting from sunglasses till jewelry are found on shipping websites. You May Like This Holiday Gifts Geeks, Most Anticipated Gadgets and Interesting Gadgets. 10. MagnetU is an amazing high-tech band that you can wear and roam around. 9. This black cotton T-shirt with the signals strength visible at the front detects Wi-fi signals around it. 8. The scary innovation, keeps a track of the person behind you. 7. Toronto motion picture maker Rob Spencer had received a severe injury in his right eye at the age of nine. 6. Having won the runners up at the global design competition, Timex TX54 is a novel innovation in the world of watches. 5. 4. Costing around 200 dollars, this shirt gives you a cool in summers. 3. 2. 1.

Creative Curved River Sinks Flow through Countertops Elkay has created a number of creative sinks for virtually any style or occasions, coming in a variety of shapes, styles and sizes for both residential and commercial use. The Mystic flowing sink, however, has to be their best yet. As shown above, this sink design curves and winds its way through a chosen surface. It can be set into something that is shaped like it is or can be set against the more standard rectangular surfaces found in most kitchens. Other sinks by Elkay come in all kinds of innovative forms with various purposes.