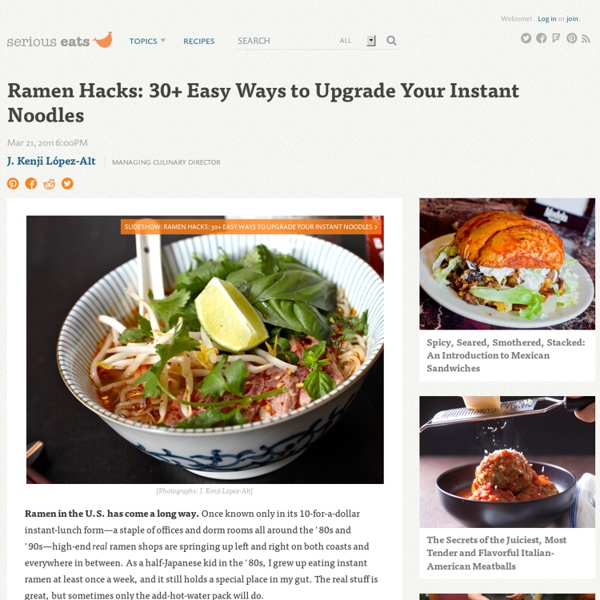 SLIDESHOW: Ramen Hacks: 30+ Easy Ways to Upgrade Your Instant Noodles [Photographs: J. Kenji Lopez-Alt] Ramen in the U.S. has come a long way. Once known only in its 10-for-a-dollar instant-lunch form—a staple of offices and dorm rooms all around the '80s and '90s—high-end real ramen shops are springing up left and right on both coasts and everywhere in between. As a half-Japanese kid in the '80s, I grew up eating instant ramen at least once a week, and it still holds a special place in my gut. That said, my tastes have changed and expanded considerably over the years, and sometimes that little flavoring packet just isn't enough. As a card-carrying member of the Ramen Transmogrification Society of Greater New York,* it is my duty, my honor, and my privilege to share with you some of our methods and recipes. For full, step-by-step instructions on any of these dishes, please click through the slideshow above. * Our membership is pretty thin right now—care to join? Simple Add-ins Mix-ins. Eggs

A Culinary Tour of the US: 12 All American Foodie Picks Posted by Katie on Thursday, September 12, 2013 · 5 Comments The melting pot ethos of the U.S. has helped create some fantastic regional culinary delights. No matter where you visit, there’s bound to be a famous regional dish. Here are 12 cities to visit to taste the best of America. EatWith host David’s all-American Brooklyn pizza Seven Blunders of the World The Seven Social Sins, sometimes called the Seven Blunders of the World, is a list that Mohandas Karamchand Gandhi published in his weekly newspaper Young India on October 22, 1925.[1] Later, he gave this same list to his grandson Arun Gandhi, written on a piece of paper, on their final day together, shortly before his assassination.[2] The seven sins or blunders are: History and influence[edit] Mahatma Gandhi, who published the list in 1925 as a list of "Seven Social Sins" (1940s photo) The list was first published by Mohandas Karamchand Gandhi in his weekly newspaper Young India on October 22, 1925.[1]

Watermelonade Recipe at Epicurious photo by Roland Bello yield Makes 1 gallon (serves 16) active time 30 min total time 30 min T-Bucket's Wacky Tips to Survive Being Broke in a Recession - T-Bucket 1. Put an egg in your Ramen 2. How to Make Marshmallow Fondant This time I decided to make it with those mini fruit flavored marshmallows. I had to sort them by colour first. I figured they would add a little bit of flavor to the fondant so I wouldn't have to add much flavoring oil.

Season This With That: A Quick Guide to Common Spices for Common Dishes As the resident food lover in my family, I often get panicked 5pm phone calls asking how to season a bowl of steamed veggies or what can replace thyme or if there's a way to make this chicken taste less boring. While there is really no "One Right Way" to season or spice your favorite foods, here's a quick guide to some of the most common — and dependably tasty! — ways to do it. A Million Ways to Roast a Chicken When given the choice between fresh herbs and dried herbs, fresh herbs are going give you better flavor every time.

Lost & Found: Comfy Chair Cushioned with Built-In Storage Lighters, keys, coins … cushioned chairs and couches are notorious for nomming all kinds of things that slip out of our pockets or otherwise get left behind and slide into the cracks. This design simply celebrates that existing phenomena, like a giant-sized pin cushion. It may come as no surprised that this clever-but-boxy furniture piece was developed by architectural designers (of Daisuke Motogi Architecture), who have a knack for exposing and expanding uses for classic furnishing types. Pixel-like pads cover the entire surface of the seat both inside and out, forming slots in which one can accidentally drop a small item or intentionally stick a book, magazine, remote and more. Cleaning this piece would not be trivial, but for those who enjoy the occasional boredom-induced, couch-cushion treasure hunt, who knows what you might find that you or someone else left behind.

Brazilian Lemonade This is my most favorite drink. Ever. Maybe I’d feel differently if I drank (as in alcohol), but there is nothing I love more than a warm, breezy afternoon and a pitcher of Brazilian lemonade. I didn’t try it for a long, long time because I was very put off by putting sweetened condensed milk in with citrus fruit. It seemed very wrong. And then I had some at Tucano’s and my life has not been the same since.