How To Cook Lentils. There is so much to love about lentils! 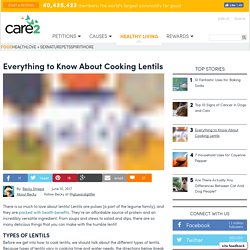 Lentils are pulses (a part of the legume family), and they are packed with health benefits. They’re an affordable source of protein and an incredibly versatile ingredient. From soups and stews to salad and dips, there are so many delicious things that you can make with the humble lentil! Types of Lentils Before we get into how to cook lentils, we should talk about the different types of lentils.

These six are the most common that you’ll find at the grocery store: Yellow or Red Lentils These lentils break down more during cooking than other varieties. How To Cook Brown Rice. Brown rice is sort of whole grains 101, which is all the more reason to perfect your brown rice game. 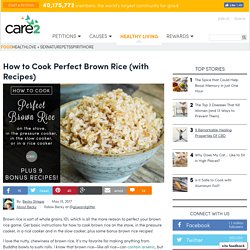 Get basic instructions for how to cook brown rice on the stove, in the pressure cooker, in a rice cooker and in the slow cooker, plus some bonus brown rice recipes! I love the nutty, chewiness of brown rice. It’s my favorite for making anything from Buddha bowls to sushi rolls. I know that brown rice—like all rice—can contain arsenic, but as a sometimes food, it can still be part of a healthy diet. You can also alter your cooking technique to reduce the amount of arsenic in your cooked rice. 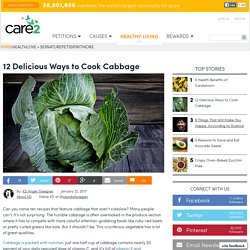 Many people can’t. It’s not surprising. The humble cabbage is often overlooked in the produce section where it has to compete with more colorful attention-grabbing foods like ruby-red beets or pretty curled greens like kale. But it shouldn’t be. This cruciferous vegetable has a lot of great qualities. Cabbage is packed with nutrition. Related: 9 Surprising Health Benefits of Cabbage Cabbage is also extremely budget friendly. Weird cabbage fact: Interestingly, cabbage soup makes a great acid rain test.

Cabbage Varieties Green cabbage grows in round heads with smooth, dark to pale green thick outer leaves. Love This? Thanks for subscribing! Red cabbage is similar to green cabbage in both flavor and the way it grows. Full o’ Beans (includes Cooking Guide) I can’t help but feel somewhat sorry for the humble bean… Somehow beans have developed a reputation for being dull, bland and boring, and have almost become a symbol of the common perception of vegan food as being, well… dull, bland and boring. 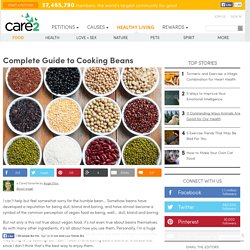 But not only is this not true about vegan food, it’s not even true about beans themselves. As with many other ingredients, it’s all about how you use them. Personally, I’m a huge fan of beans, both for their nutritional profile and also for the taste and texture benefits they bring to my cooking. But I don’t recommend eating beans alone or unseasoned, since I don’t think that’s the best way to enjoy them. According to some sources, beans were one of the first crops cultivated when humans began to develop agriculture, and their cultivation played a key role in the human evolution from a primitive existence toward a more stabilized one. On a non-busy day, I like to cook up a supply of beans that I can use later on in the week. Eat 9 Walnuts a Day to Keep Stress at Bay. Walnuts are a wonder nut, that offer almost too many health benefits to count. 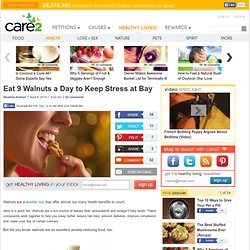 Here is a quick list: Walnuts are a rich source of dietary fiber, antioxidants and omega-3 fatty acids. These compounds work together to help you sleep better, reduce hair loss, prevent diabetes, improve complexion and lower your risk of certain cancers. But did you know: walnuts are an excellent anxiety-reducing food, too. A first-of-its-kind Penn State University study found that walnuts and walnut oil can reduce blood pressure during periods of stress. In this study, 22 adults with elevated levels of “bad” cholesterol were put on three different diets for six weeks each. At the end of the study, the three groups were put under mildly stressful situations such as making a speech and dipping a foot in a bucket of ice-cold water. According to statistics provided by the American Psychological Association, more than 77% of Americans admit to regularly experiencing physical symptoms caused by stress. 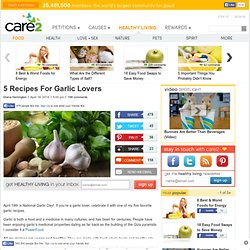 If you’re a garlic lover, celebrate it with one of my five favorite garlic recipes. Garlic is both a food and a medicine in many cultures, and has been for centuries. People have been enjoying garlic’s medicinal properties dating as far back as the building of the Giza pyramids. I consider it a PowerFood. All my recipes are vegan and healthy. “No cook who has attained mastery over her craft ever apologizes for the presence of garlic in her productions.” 1. The first time I saw this recipe being prepared was on the Yaku Yama mountain in the ’70s (my hippy days). Ingredients: 2 large zucchinis 10 cloves of garlic Almond oil Sea salt Directions: Grate 2 large zucchinis. Arthur Baer says: “There is no such thing as a little garlic.” Nothing tastes better than sauteed onions and garlic! 2. 1. Yummy stew with garlic and many hardy vegetables.