The Psychology of Color [Infographic] 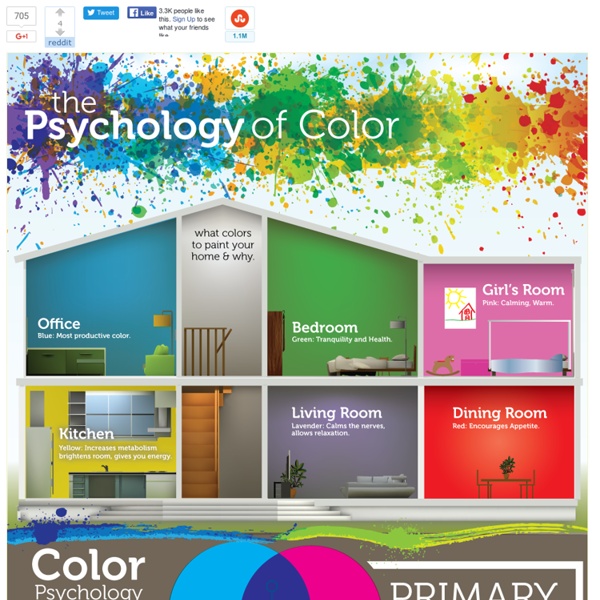 Gut Feelings Have you ever had a "gut feeling" about something that's later turned out to be true? Have you ever felt "open-hearted"? Ever encountered a situation that's made you "hot under the collar"? Absolutely Lovely Watercolor Walls - Goedeker's Home Life If you haven't heard of watercolor walls yet, consider this your lucky day! They are like nothing I've ever seen before, and the moment I discovered their beauty, I knew I had to share! A wall painted with watercolors gives a room an entirely different feel. The color options are endless, and even typical, "boring" colors are eye-catching. For example, look at the two walls below.

Enlightenment « Finding the li Supposing we all learned to view the universe like Einstein saw it? Wouldn’t that lead to a very different world? Now, I’m not suggesting that any of us can ever hope to have the genius that Einstein possessed, but it’s possible that the traditional Neo-Confucian approach to understanding the universe (that I’ve described in earlier posts) might offer a few insights into seeing the same natural wonder that Einstein saw all around him. Albert Einstein saw no distinction between science and religiousness.

Color Theory for Designers, Part 1: The Meaning of Color About The Author Cameron Chapman is a professional Web and graphic designer with over 6 years of experience. She writes for a number of blogs and is the author of The Smashing … More about Cameron Chapman … There are few things in design that are more subjective—or more important—than the use of color. A color that can evoke one reaction in one person may evoke the opposite reaction in another, due to culture, prior association, or even just personal preference.

100 Amazing How-To Sites to Teach Yourself Anything Posted by Site Administrator in Online Learning May 7th, 2009 Learning new skills and expanding your knowledge doesn’t have to cost you an arm and a leg. There are loads of free resources on the Web that can help you find instructional videos, tutorials and classes to learn a wide variety of skills from fixing basic car problems to speaking another language. Intuition May Reveal Where Expertise Resides in the Brain In the instant before he drove Kuang's sting through the base of the first tower, he attained a level of proficiency exceeding anything he'd known or imagined. Beyond ego, beyond personality, beyond awareness, he moved, Kuang moving with him, evading his attackers with an ancient dance, Hideo's dance, grace of the mind-body interface granted him, in that second, by the clarity and singleness of his wish to die. —William Gibson,Neuromancer, 1984 Sometimes a solution just appears out of nowhere. You bring your multipage spreadsheet to the finance department, and within seconds the accountant tells you something isn't quite right without being able to say what.

Color Palette Generator Color Palette Generator #ffeeff #ffccdd Plot Summary Gullivers Travels by Jonathan Swift by John Roberts John Roberts's image for: "Plot Summary Gullivers Travels by Jonathan Swift" Caption: Location: Researchers Find Out How a New Concept Makes Its Way into the Brain Carnegie Mellon University (CMU) scientists have documented the formation of a newly learned concept inside the brain and found that it occurs in the same brain areas for everyone. In other words, brain's "filing system" is same for everyone. To prove this, leading neuroscientist Marcel Just pointed to the Smithsonian Institute's 2013 announcement about the olinguito, a newly identified carnivore species that mainly eats fruits and lives by itself in the treetops of rainforests. Millions of people read the information about the olinguito and in doing so permanently changed their own brains.

Let the Light in: 7 Rejuvenating Apartment Renovations in Barcelona Barcelona is lauded for its vibrant, creative approach to urbanism and as a result, often acts as a city-building model around the world. In many instances, the city is discussed as not only being functional, but also as one that holistically considers the citizen as a stakeholder in its planning processes. In some neighborhoods, streets are tightly packed, where shops, markets and services are all easily within walking distance.

Gulliver's Travels Summary Gulliver goes on four separate voyages in Gulliver's Travels. Each journey is preceded by a storm. All four voyages bring new perspectives to Gulliver's life and new opportunities for satirizing the ways of England. The first voyage is to Lilliput, where Gulliver is huge and the Lilliputians are small. At first the Lilliputians seem amiable, but the reader soon sees them for the ridiculous and petty creatures they are.