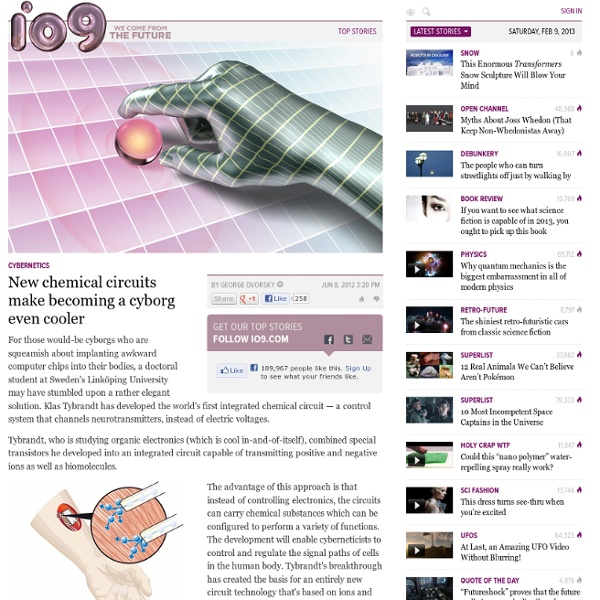 First patient receives next-generation artificial heart replacement The first total artificial heart was implanted in 1969 and was used for a very short amount of time while the patient awaited transplant. The next total device would not come until 1982 with Robert Jarvik’s famous artificial heart. Current artificial hearts have the drawbacks of fixed heart rates, low battery life, or is too large to fit into many patients. The purpose of the heart is to sustain life long enough to find a suitable donor organ. Unfortunately, the device is not suited for everyone, because it’s about three times larger than a normal heart and will not fit inside of every adult’s chest cavity. Though it has been less than two weeks since the device was implanted into the 75-year-old male patient, he seems to be tolerating it quite well. This man is the first patient to get the heart, though three more implants have been scheduled for this phase of clinical trial.

A Brief Guide to Genomics A Brief Guide to Genomics DNA, Genes and Genomes Deoxyribonucleic acid (DNA) is the chemical compound that contains the instructions needed to develop and direct the activities of nearly all living organisms. DNA molecules are made of two twisting, paired strands, often referred to as a double helix. Each DNA strand is made of four chemical units, called nucleotide bases, which comprise the genetic "alphabet." An organism's complete set of DNA is called its genome. With its four-letter language, DNA contains the information needed to build the entire human body. Located on 23 pairs of chromosomes packed into the nucleus of a human cell, genes direct the production of proteins with the assistance of enzymes and messenger molecules. Proteins make up body structures like organs and tissue, as well as control chemical reactions and carry signals between cells. DNA Sequencing Sequencing simply means determining the exact order of the bases in a strand of DNA. The Human Genome Project Top of page

Is Scopolamine the world's scariest drug? The drug, called scopolamine, also known as ‘The Devil’s Breath,' is derived from a particular type of tree common in Colombia called the Borrachero tree. The word "borrachero," which roughly translates to "get-you-drunk," grows wild in Bogota,Colombia. This tree which naturally produces scopolamine is so famous in the countryside that mothers warn their children not to fall asleep below its cunningly beautiful yellow and white flowers. Read more... And when extracted and made into a colorless, odorless and tasteless powder, scopolamine does more than induce strange dreams. screenshot/Youtube VICE Correspondent Ryan Duffy in Bogota, Colombia narrating the documentary "Colombian Devil's Breath." Besides thinking of ways of how he could pull pranks on his friends when he returned, "the original plan was for me to sample the drug myself to really get an idea of the effect it had on folks," he said. andreasnilsson1976 Far from being a joke,the late Dr. screenshot via YouTube KJ Mullins

Meet the first HEARTLESS man who is able to live without a heartbeat or a PULSE Dr Billy Cohn and Dr Bud Frazier from the Texas Heart Institute installed first 'continuous flow' device last MarchPatient Craig Lewis, 55, no longer has a pulseDevice first tested in calves By Daily Mail Reporter Updated: 20:03 GMT, 26 February 2012 In March of last year, Craig Lewis, 55, was dying from a heart condition that caused build-ups of abnormal proteins, and not even a pacemaker could help save his life. But two doctors from the Texas Heart Institute proposed a revolutionary new solution – install a ‘continuous flow’ device that would allow blood to circulate his body without a pulse. Dr Billy Cohn and Dr Bud Frazier installed the device after removing Mr Lewis’ heart. Within a day, the patient was up and speaking with physicians. Scroll down for video Heartless: Craig Lewis, 55, was the first man to have a 'continuous flow' pump to replace his entire heart - and now has no pulse No heart: The device uses blades to circulate blood through the body, replacing the heart

What does Oscar Pistorius’s success at the Olympics mean for the future of cybernetics? As someone who had to wear a prosthetic for 18 years before just plain giving up, I guess we might be concerned if they do manage to become good enough to warrant people wanting to replace biology with cybernetics. But considering that the prosthetic arm/hand I had could barely open/close and had a death grip that was utterly useless, I can't quite see this stuff happening anytime soon. People may think it'd be cool to have a robot hand but from what I've seen, it's really only useful for people who had to be amputated due to an injury or illness. I guess if people elect to chop off a part and replace it that's another story since they'll see the value in the high cost but I think people are fantasizing a bit too much on what could be instead of what is. So, saying "Now as the technology improves, we will eventually get to the point where the prosthetics function better than people's original hands..." may be true but it certainly isn't going to be soon enough.

10 of the Most Dangerous Chemicals in the World Interesting — when I was in the Army, it was called CBR (chemical, biological, radioactive). I wonder why they changed the order and the initials? Pressure from Jay Leno? NBC was for Nuclear, Biological, Radiological. When were you in? I was in back in the late 70s. I remember atropine was one of the drugs that was used to treat the immediate effects of nerve gas exposure. And we're supposed to believe that our benevolent government has truly decided to destroy all our VX stockpiles. I dunno, we've got much more targeted, devastating methods of wiping ourselves off the planet these days. I was in in the 90's. The husband, Mr.

Digital Tattoo Gets Under Your Skin to Monitor Blood | Gadget Lab Bioengineering doctoral student Kate Balaconis shines the iPhone reader against her tattooless arm. Maybe tattoos aren’t just for Harley riders or rebellious teens after all. In a few years, diabetics might get inked up with digital tats that communicate with an iPhone to monitor their blood. Instead of the dye used for tribal arm bands and Chinese characters, these tattoos will contain nanosensors that read the wearer’s blood levels of sodium, glucose and even alcohol with the help of an iPhone 4 camera. Dr. “I had no idea how much to drink, or when,” said Clark, reflecting on her marathon run. Clark’s technology could spell out the eventual demise of the painful finger pricks required for blood tests — assuming users have an iPhone, which Northeastern bioengineering grad student Matt Dubach has customized to read light from the tiny sensors to collect and output data. Within the implant, certain nanoparticles will bind exclusively to specific blood contents, like sodium or glucose.

NATURAL BORN CYBORGS? NATURAL BORN CYBORGS? By Andy Clark We cannot see ourselves aright until we see ourselves as nature's very own cyborgs: cognitive hybrids who repeatedly occupy regions of design space radically different from those of our biological forbears. Introduction "As our worlds become smarter, and get to know us better and better," writes cognitive scientist Andy Clark, "it becomes harder and harder to say where the world stops and the person begins." Clark's examines the"potent, portable machinery linking the user to an increasingly responsive World Wide Web," as well as "the gradual smartening-up and interconnection of the many everyday objects which populate our homes and offices." According to Clark, we have to give up the prejudice "that whatever matters about mind must depend solely on what goes on inside the biological skin-bag, inside the ancient fortress of skin and skull." ANDY CLARK is Professor of Philosophy and Cognitive Science at the University of Sussex, UK. NATURAL BORN CYBORGS?

Cortisol Steroid hormone; as a medication, known as hydrocortisone Cortisol is a steroid hormone, in the glucocorticoid class of hormones. When used as a medication, it is known as hydrocortisone. Health effects[edit] [edit] In the early fasting state, cortisol stimulates gluconeogenesis (the formation of glucose), and activates antistress and anti-inflammatory pathways. In the late fasting state, the function of cortisol changes slightly and increases glycogenesis. Elevated levels of cortisol, if prolonged, can lead to proteolysis (breakdown of proteins) and muscle wasting.[7] Several studies have shown that cortisol can have a lipolytic effect (promote the breakdown of fat). Immune response[edit] Cortisol prevents the release of substances in the body that cause inflammation. Cortisol can weaken the activity of the immune system. Cortisol stimulates many copper enzymes (often to 50% of their total potential), including lysyl oxidase, an enzyme that cross-links collagen, and elastin. [edit] [edit]