Pamela Meyer: How to Spot a Liar 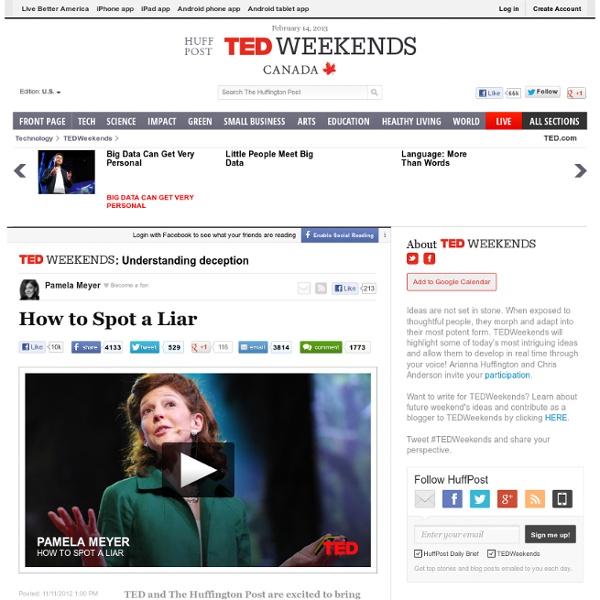 TED and The Huffington Post are excited to bring you TEDWeekends, a curated weekend program that introduces a powerful "idea worth spreading" every Friday, anchored in an exceptional TEDTalk. This week's TEDTalk is accompanied by an original blog post from the featured speaker, along with new op-eds, thoughts and responses from the HuffPost community. Watch the talk above, read the blog post and tell us your thoughts below. Become part of the conversation! Watch Pamela Meyer's talk above about the science of "lie spotting" and how it can lead to a more honest world. Lying: Even t-shirts know how bad it is. The other day a guy walked past me wearing a t-shirt with two words on it: "Everybody lies." Of course it's true. But our deception epidemic is not all cute, funny, and kind. High-stakes lying is out of control. "A lie has no power whatsoever by its mere utterance; its power emerges when someone else agrees to believe the lie." -- Pamela Meyer Our tolerance for truthiness has increased.

Body Language Basics - Syncrat Publishing Throughout history it has been an advantage if an individual can read body language. Body language helps in everyday life from closing a business deal or trusting someone with your life, to recognising when someone is upset. Body language is the art of making an educated guess at a person’s feelings or intentions based on their posture, movement and positioning. To understand a person’s body language you need to take into account more than one aspect of their body language. Each action or stance in the following list means very little, unless there is more than one indicating the same thing. Arms Feet Head Chest Other

How to Learn More and Study Less | zen habits Photo by fatal Cleopatra Editor’s note: This is a guest post written by Scott Young. Every Monday is Productivity & Organization Day at Zen Habits.The title of this post sounds impossible right? My current GPA is a 4.2, which rests midway between an A and an A+. Place first in a three province wide chemistry test. I say all this not to boast about how great I am, because I feel my accomplishments are rather modest compared to many people I know. More studying time won’t help if the way you are studying is flawed to begin with. Holistic Learning Smart people don’t just learn better. Holistic learning is basically the opposite of rote memorization. Excessive studying shows you aren’t learning holistically. How to Boost Your Study Habits Holistic learning isn’t like a brainstorming technique or mind-mapping. But there are some tools that can help you shift your learning habits so they become more holistic: Visceralize – You’ve probably heard of visualizing, right? See also:

Bella lounging in the yard How to tell in 15 minutes whether someone likes you - by Bridget Webber Bridget Webber's image for: "Body Language that Shows when someone of the Opposite Sex Fancies you" Caption: Location: Image by: Wouldn't it be great to be able to tell within fifteen minutes whether someone likes you or not? The Eyebrow Raise The eyebrow raise is generally reserved for members of the opposite sex who like what they see, and it happens straight away. The Smile Although smiling can be faked, a genuine smile can easily be separated from a false one. A smile that is more of a grimace, or is delivered with lips firmly shut tight and downward turning corners of the lips, is a concerted effort rather than an indication that someone likes you. The Lean. If you are sat with a person who likes you, he or she is likely to lean in toward you as you converse. If you are standing, a person will stand close to you if he or she likes you, and give you full attention. Feet. Eye Contact Touching. When you like someone, you are drawn to touch him or her, even when you try not to! Mirroring.

CEO shall not whine Last Updated Mar 22, 2011 7:03 PM EDT People are always complaining about CEOs having all this wealth and power, it's not what you know but who you know, the rich keep getting richer, and all that. What a bunch of whiny crap. You'd think CEOs were born with the title, like royalty. Here's a powerful example straight from this week's news page. Ivan Seidenberg, CEO of Verizon Communications, began his career as a cable splicer's assistant right out of high school. Ed Whitacre, Jr., former Chairman and CEO of AT&T, began his career as a facility engineer at Southwestern Bell in 1963. Randall Stephenson, Chairman and CEO of AT&T, joined the Oklahoma IT department of Southwestern Bell right out of school in 1982. Ivan, Ed, and Randy weren't born CEOs. Now, I don't personally know these particular CEOs, but I have known hundreds of successful executives with stories similar to theirs. They've experienced significant adversity in their lives. They're like pit bulls with a vision.

5 Psychology Studies Every Awkward Teenager Should Read We've demonstrated before that, even according to science, being a teenager sucks. So one could logically assume that if being a normal teenager sucks, then being a shy teenager must be even worse. But if we ever got the chance to go back in time to visit our lonely teenage selves ... well, first off we'd deal them an epic backhanded mouthslap (butterfly effect be damned). But once they recovered, we'd tell them to keep their chin up, because ... #5. Getty Adolescence is the period in everyone's life where the idea of sex metamorphoses from a mysterious concept to an uncomfortable and alarming reality to a baited hook perpetually hanging above your head. Getty"Franklin Kimble: Right in the asshole." In such a hypersexualized environment, it's easy to get depressed when your crushes are less than receptive to your charms (or, in the case of your average shy teenager, your lack thereof). Getty"I waited until I was 30. Getty"I'm gonna give you a big push so you can go on your own for a bit.

Honda Brio saloon, Volkswagen Bulli, Ford Eco Sport, Maruti Swift Dzire CS, Tata Manza CS, Mahindra Verito CS, HM Ambassador CS, Mahindra Mini Xylo, VW Up saloon Way back in 2006, the Indian government introduced a policy for the 4 wheeler manufacturers informing that they could earn excise benefits if they can duck their cars under the 4 meter scale and plonk petrol engines not exceeding the cubic capacity of 1.2 liters and diesel engines not exceeding the cubic capacity of 1.5 liters. However, what the government suitably failed to add that the resulting cars should be all hatchbacks. This oversight by the government has now resulted in a whole lot of auto makers scrambling for the sub 4 meter mark sedans, Yes, you read it right, SEDANS. These days or rather from 2006, manufacturers are scrambling for sub 4 meter sedans so that they can entice the car buyers and give them a sedan for the price of a hatchback. We all know that in India, a sedan is considered as a status quo thing. Hence the need for this article highlighting all the upcoming new sub 4 meters sedans in India. Honda Brio saloon : 2012 Swift Dzire CS : Tata Manza CS : VW Up saloon :

13 Interesting Facts about Dreams | Tasty Human Dreaming is one of the most mysterious experiences in our lives. During the Roman Era, some dreams were submitted to the Roman Senate for analysis and dream interpretation. They were thought to be messages from the gods. Dream interpreters even accompanied military leaders into battles and campaigns! In addition we know, that many artists have received their creative ideas from their dreams. 1. Within 5 minutes of waking, half of your dream is forgotten. 2. People who became blind after birth can see images in their dreams. 3. Every human being dreams (except in cases of extreme psychological disorder). 4. Our mind is not inventing faces – in our dreams we see real faces of real people that we have seen during our life but may not know or remember. 5. A full 12% of sighted people dream exclusively in black and white. 6. If you dream about some particular subject it is not often that the dream is about that. 7. The most common emotion experienced in dreams is anxiety. 8. 9. 10. 11. 12.

How to Boost Creativity & Innovation in 10 Minutes Trying to be innovative feels, at least for most people, nearly impossible. Don't believe me? Try it. Give up? Our employees don't either. Kill a Stupid Rule is one of the tools described by Lisa Bodell, the founder and CEO of futurethink and the author of Kill the Company. Playing Kill a Stupid Rule is not only easy, your employees will think it's a hoot. 1. Then break them down into two-or three-person teams. 2. "If you could kill or change all the stupid rules that get in the way of better serving our customers or just doing your job, what would they be and how would you do it?" 3. And make sure your skin is particularly thick that day, because many of the stupid rules employees will want to kill are your stupid rules. "At the 10-minute mark the teams will be begging you for more time," Lisa says, "not because they're coming up empty but because 10 minutes isn't nearly enough time to write everything down. 4. 5. Some of the same rules will show up multiple times. 6. 7. No problem. 8.

47 Mind-Blowing Psychological Facts You Should Know About Yourself I’ve decided to start a series called 100 Things You Should Know about People. As in: 100 things you should know if you are going to design an effective and persuasive website, web application or software application. Or maybe just 100 things that everyone should know about humans! The order that I’ll present these 100 things is going to be pretty random. Dr. <div class="slide-intro-bottom"><a href="