The Physics of Sports 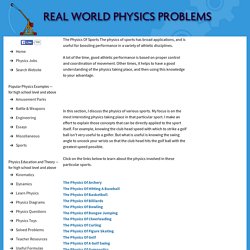 A lot of the time, good athletic performance is based on proper control and coordination of movement. Other times, it helps to have a good understanding of the physics taking place, and then using this knowledge to your advantage. In this section, I discuss the physics of various sports. My focus is on the most interesting physics taking place in that particular sport. Popular Physics Examples —for high school level and above Physics Education and Theory —for high school level and above Kids Section Site Info. The Physics of Sport. Newton's Laws of Motion. Newtons laws of motion in sports. 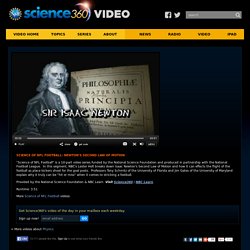 In this segment, NBC's Lester Holt breaks down Isaac Newton's Second Law of Motion and how it can effects the flight of the football as place kickers shoot for the goal posts. Professors Tony Schmitz of the University of Florida and Jim Gates of the University of Maryland explain why it truly can be "hit or miss" when it comes to stricking a football.

Provided by the National Science Foundation & NBC Learn Visit Science360 / NBC Learn. Newton's Third Law of Motion - Science of NFL Football. An athlete uses physics to shatter world records - Asaf Bar-Yosef. Dick Fosbury's gold medal jump in 1968.In order to see how modern day high jumpers use the Fosbury Flop watch this slow motion video of high jumpers.If you want to understand how to find the center of mass of two objects in a mathematical form, visit this website. 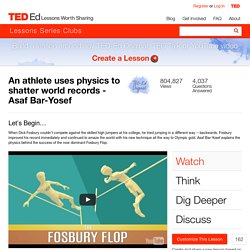 (The website features a nice simulation and the basic mathematical calculations for the center of mass of two objects.)In this website you can find the center of mass of many two and three dimensions objects.Some articles about the physical aspects of the Fosbury Flop.From setback and injury to an Olympic gold medal -- see how confidently making decisions led one bobsledder down an unexpected pathway to victory. Understand the science behind a wildly popular, iconic American pastime with The Science of Cheerleading, a new ebook. 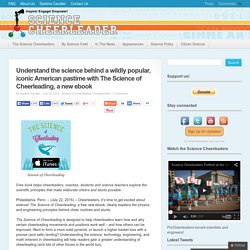 Philadelphia, Penn. – (July 22, 2015) – Cheerleaders, it’s time to get excited about science! The Science of Cheerleading, a free new ebook, clearly explains the physics and engineering principles behind cheer routines and stunts. The Science of Cheerleading is designed to help cheerleaders learn how and why certain cheerleading movements and positions work well – and how others can be improved. Want to form a more solid pyramid, or launch a higher basket toss with a precise (and safe) landing? The math behind Michael Jordan’s legendary hang time - Andy Peterson and Zack Patterson. You can further investigate the mathematics behind hang time on Earth, other bodies in the solar system and maybe even some places a bit more “Looney Tunes” using these Hungry Teacher Lessons: Hang Time, Space Jam and In Sync. 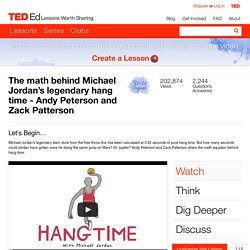 Love the application of Physics to the real world and everyday life? Visit: Real World Physics Problems to find out more! Sport Science also provides a great video on Hang Time with Jordan Farmer! Prepare to be amazed! Gridiron physics: Scalars and vectors - Michelle Buchanan. Scalars and Vectors: These types of measurement are used frequently in our everyday world. 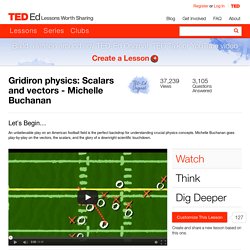 You saw the football play describing the application of scalars and vectors, now find out more about these types of measurements. Sports in Science (Exploratorium) Speed, Velocity and Acceleration: Speed is a scalar measurement, but velocity and acceleration are vector measurements. At the 2010 NFL draft, NFL Network anchor Rich Eisen was dared to run the 40-yard dash. The 40-something reporter in a suit was no match for the 22 year old NFL draft prospects.