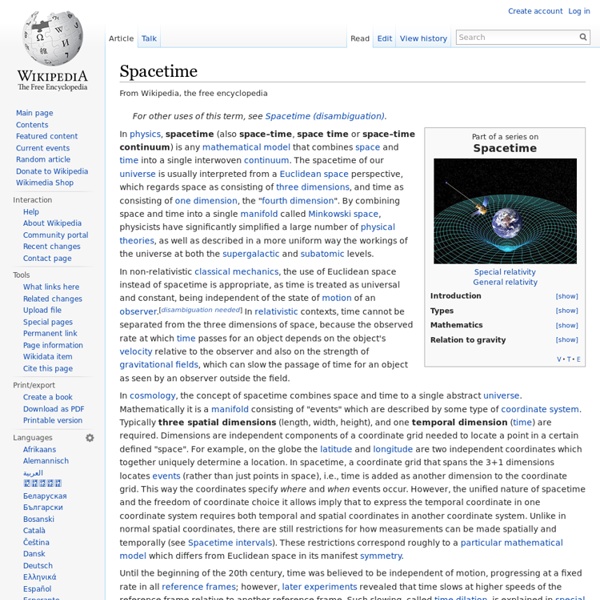 In non-relativistic classical mechanics, the use of Euclidean space instead of spacetime is appropriate, as time is treated as universal and constant, being independent of the state of motion of an observer.[disambiguation needed] In relativistic contexts, time cannot be separated from the three dimensions of space, because the observed rate at which time passes for an object depends on the object's velocity relative to the observer and also on the strength of gravitational fields, which can slow the passage of time for an object as seen by an observer outside the field. Until the beginning of the 20th century, time was believed to be independent of motion, progressing at a fixed rate in all reference frames; however, later experiments revealed that time slows at higher speeds of the reference frame relative to another reference frame. The term spacetime has taken on a generalized meaning beyond treating spacetime events with the normal 3+1 dimensions. Spacetime in literature[edit]

Quantum cosmology In theoretical physics, quantum cosmology is a field attempting to study the effect of quantum mechanics on the formation of the universe, or its early evolution, especially just after the Big Bang. Despite many attempts, such as the Wheeler-deWitt equation, and more recently loop quantum cosmology, the field remains a rather speculative branch of quantum gravity. An important problem in this field is the origin of physical information in the universe. See also[edit] References[edit] External links[edit] Relativity of simultaneity On spaceships, map-clocks may look unsync'ed. Event B is simultaneous with A in the green reference frame, but it occurred before in the blue frame, and will occur later in the red frame. Events A, B, and C occur in different order depending on the motion of the observer. The white line represents a plane of simultaneity being moved from the past to the future. If we imagine one reference frame assigns precisely the same time to two events that are at different points in space, a reference frame that is moving relative to the first will generally assign different times to the two events. A mathematical form of the relativity of simultaneity ("local time") was introduced by Hendrik Lorentz in 1892, and physically interpreted (to first order in v/c) as the result of a synchronization using light signals by Henri Poincaré in 1900. The train-and-platform thought experiment[edit] The train-and-platform experiment from the reference frame of an observer on board the train Spacetime diagrams[edit]

Invariant mass The invariant mass, rest mass, intrinsic mass, proper mass, or (in the case of bound systems or objects observed in their center of momentum frame) simply mass, is a characteristic of the total energy and momentum of an object or a system of objects that is the same in all frames of reference related by Lorentz transformations. If a center of momentum frame exists for the system, then the invariant mass of a system is simply the total energy divided by the speed of light squared. In other reference frames, the energy of the system increases, but system momentum is subtracted from this, so that the invariant mass remains unchanged. Systems whose four-momentum is a null vector (for example a single photon or many photons moving in exactly the same direction) have zero invariant mass, and are referred to as massless. A physical object or particle moving faster than the speed of light would have space-like four-momenta (such as the hypothesized tachyon), and these do not appear to exist. .

Einstein field equations The Einstein field equations (EFE) or Einstein - Hilbert equations are a set of 10 equations in Albert Einstein's general theory of relativity which describe the fundamental interaction of gravitation as a result of spacetime being curved by matter and energy.[1] First published by Einstein in 1915[2] as a tensor equation, the EFE equate local spacetime curvature (expressed by the Einstein tensor) with the local energy and momentum within that spacetime (expressed by the stress–energy tensor).[3] As well as obeying local energy-momentum conservation, the EFE reduce to Newton's law of gravitation where the gravitational field is weak and velocities are much less than the speed of light.[4] Exact solutions for the EFE can only be found under simplifying assumptions such as symmetry. Special classes of exact solutions are most often studied as they model many gravitational phenomena, such as rotating black holes and the expanding universe. Mathematical form[edit] where the scalar curvature,

LG15: The Resistance LG15: The Resistance (September 20, 2008—December 12, 2008) was a web television series produced by EQAL that took place within the LG15 Universe. The series was first announced on July 4, 2008 via the official behind-the-scenes LG15 blog, Inside.[1] It premiered on September 16, 2008 at the New York Television Festival,[2] and was first uploaded for public viewing on September 20, 2008.[3] The show continued upon the mythology established by lonelygirl15 and KateModern. LG15: The Resistance also marked the debut of a new LG15.com website. Plot[edit] Season One: "We Will Not Be Stopped"[edit] The first season of the show marks the entrance of the Hymn of None, an organization resisting the Order. The Hymn of None posts a video, exposing a company called LifesBlood Labs to be nothing but a sham to get the blood from Trait Positive girls (like the Order). The Hymn of None posts a puzzle leading Jonas and Sarah to the Samsarine Doctrine. The group travel east. Characters[edit] See also[edit]

Friedmann equations and pressure . The equations for negative spatial curvature were given by Friedmann in 1924.[2] Assumptions[edit] The Friedmann equations start with the simplifying assumption that the universe is spatially homogeneous and isotropic, i.e. the Cosmological Principle; empirically, this is justified on scales larger than ~100 Mpc. where is a three-dimensional metric that must be one of (a) flat space, (b) a sphere of constant positive curvature or (c) a hyperbolic space with constant negative curvature. Einstein's equations now relate the evolution of this scale factor to the pressure and energy of the matter in the universe. The equations[edit] There are two independent Friedmann equations for modeling a homogeneous, isotropic universe. which is derived from the 00 component of Einstein's field equations. is the spatial curvature in any time-slice of the universe; it is equal to one-sixth of the spatial Ricci curvature scalar R since in the Friedmann model. which eliminates to give: Here . . Set