Uk.businessinsider. IB Physics: The Extended Essay. This Guy Gets Into A Pool And Points A Loaded Rifle At Himself. What Happens Next? Science! Remember that opening scene of Saving Private Ryan? 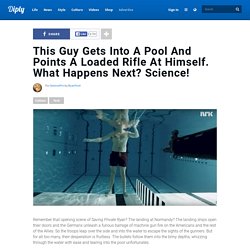 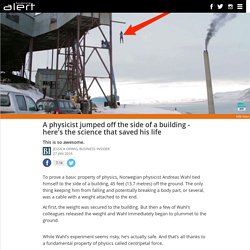 The only thing keeping him from falling and potentially breaking a body part, or several, was a cable with a weight attached to the end. At first, the weight was secured to the building. But then a few of Wahl’s colleagues released the weight and Wahl immediately began to plummet to the ground. What Is Something? Quora. Origins of Newton's First Law. ISSN: 0031-921XDOI: 53, Issue 2, pages 80-83 Eugene HechtAdelphi University, Garden City, NY Anyone who has taught introductory physics should know that roughly a third of the students initially believe that any object at rest will remain at rest, whereas any moving body not propelled by applied forces will promptly come to rest. 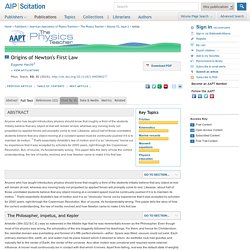 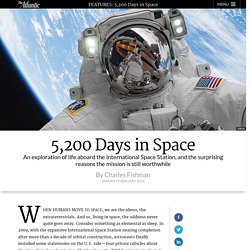 And so, living in space, the oddness never quite goes away. Consider something as elemental as sleep. In 2009, with the expansive International Space Station nearing completion after more than a decade of orbital construction, astronauts finally installed some staterooms on the U.S. side—four private cubicles about the size of airplane lavatories. This is what happens when you drop a bowling ball and feathers in the world's biggest vacuum chamber. [VIDEO] 'Interstellar': Meet the Physicist Behind the Science of Christopher Nolan's Space Epic (Exclusive Featurette) Minute Physics- How Long Can You Balance a Pencil? 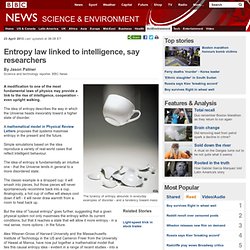 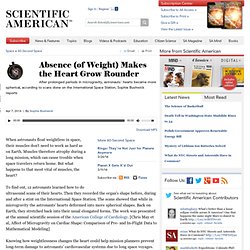 Muscles therefore atrophy during a long mission, which can cause trouble when space travelers return home. But what happens to that most vital of muscles, the heart? To find out, 12 astronauts learned how to do ultrasound scans of their hearts. Good luck, physicists, with those tricky 'meaning of life' questions. I had to smile. 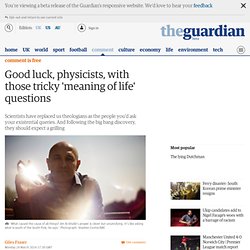 I am standing in a circle with Prof Jim Al-Khalili and others, discussing the new findings about the big bang. To be honest, my head doesn't really get itself around gravitational waves at the best of times, but before breakfast it's all too much. But then comes a moment of insight. Someone asks Al-Khalili – a professor of theoretical physics – what came before the big bang. 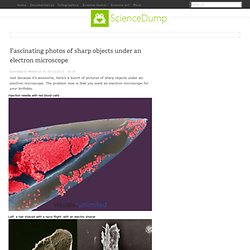 The problem now is that you want an electron microscope for your birthday. Injection needle with red blood cells Left: a hair shaved with a razor Right: with an electric shaver Injection needle penetrating skin Red blood cell on a needle point. The Beginning of Everything. Ode to a Flower: Richard Feynman’s Famous Monologue on Knowledge and Mystery, Animated.

On the Lookout for Falling Ice Amid Manhattan’s Towers. ‘Extraordinary Women in Science and Medicine’ Offers Up Little-Known Details. Yes, and yes. 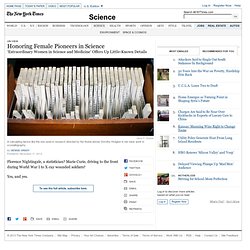 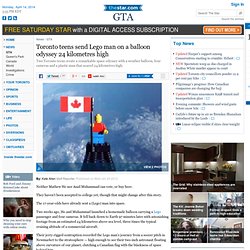 They haven’t been accepted to college yet, though that might change after this story. The 17-year-olds have already sent a (Lego) man into space. Two weeks ago, Ho and Muhammad launched a homemade balloon carrying a Lego passenger and four cameras. It fell back down to Earth 97 minutes later with astonishing footage from an estimated 24 kilometres above sea level, three times the typical cruising altitude of a commercial aircraft.

Famous Physists. Relativity. Measurement. Space debris collisions expected to rise. 22 April 2013Last updated at 11:10 ET By Jonathan Amos Science correspondent, BBC News Fortunately, there have been very few collisions in orbit so far Unless space debris is actively tackled, some satellite orbits will become extremely hazardous over the next 200 years, a new study suggests. The research found that catastrophic collisions would likely occur every five to nine years at the altitudes used principally to observe the Earth.

And the scientists who did the work say their results are optimistic - the real outcome would probably be far worse. To date, there have been just a handful of major collisions in the space age. The study was conducted for the Inter-Agency Space Debris Coordination Committee. Einstein to Weinstein: the lone genius is an exception to the rule (ScienceAlert) Albert Einstein was considered to be a ‘lone genius’ – but this was not the case, and it’s certainly not the norm, writes Katherine J Mack. Image: Catwalker/Shutterstock Developing a Theory of Everything is physics' Holy Grail. Dark energy: A new standard model for physics?