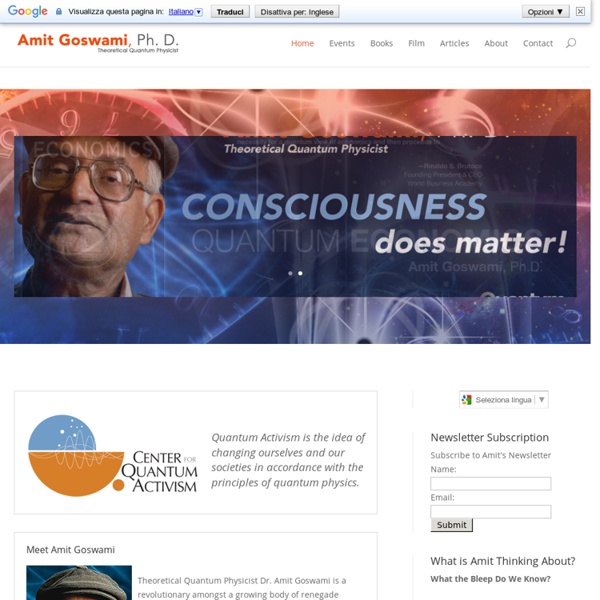 Quantum Activism is the idea of changing ourselves and our societies in accordance with the principles of quantum physics. The Center for Quantum Activism seeks to educate, support and facilitate the transformation from the current materialist worldview to one based on the primacy of consciousness. Greetings from Amit Dear friends, Last year was a good one for me personally and, what is even more satisfying, for the quantum activism movement as a whole. The year began with a conference on consciousness in Puebla, Mexico where the high point for me was to meet the illustrious Ervin Lazlo, who has been talking about the quantum field of consciousness for two decades.

The holographic universe: Where science and spirituality meet 2011 World Science Festival panel discussion on the holographic principle. What we touch. What we smell. masaru emoto In all of these experiments, distilled water for hospital usage produced by the same company was used. Since it is distilled twice, it can be said that it is pure water. The result was that we always observed beautiful crystals after giving good words, playing good music, and showing, playing, or offering pure prayer to water. On the other hand, we observed disfigured crystals in the opposite situation. Moreover, we never observed identical crystals.

The Science of Energy and Thought. Subconscious Mind Power A scientific approach explaining the power of thought. We have all heard before, 'Your thoughts create your reality'. Well, new quantum physics studies support this idea. Learn about recent research about how the mind can influence the behavior of subatomic particles and physical matter. If you enjoy the video, please pass it on to friends and family.

Grounding Techniques for Empaths & Sensitives In these trying times, with the constant bombardment of negative energies and emotions, it is a challenge for Empaths and Sensitives to stay grounded. Even when staying home, within one’s personal sanctuary, the empathic antennas are perpetually picking up pain from the outside world. Because of this, we can easily become consumed with depression, listlessness and apathy and lose sight of what our roles here are. From the archive: Deepak Chopra’s 2002 talk at TED As part of a public exchange of letters (his, ours, his) regarding TED’s views on the line between good and bad science, Deepak Chopra has asked us to post a talk he gave at TED in 2002 (four years before TED began free online distribution of some of its talks). Here it is: We never posted Chopra’s talk before because, frankly, it seemed unfocused, and it used the language of quantum physics in a way we thought was misleading. We admired Deepak’s desire for a more spiritual, connected world. But in our curatorial opinion, this particular talk wasn’t right for the homepage of TED.com.

Continuing Education For Mental Health Professionals About Somatic Experiencing (SE™) SOMATIC EXPERIENCING (SE™) is a potent psychobiological method for resolving trauma symptoms and relieving chronic stress. It is the life's work of Dr. Peter A. Levine, resulting from his multidisciplinary study of stress physiology, psychology, ethology, biology, neuroscience, indigenous healing practices, and medical biophysics, together with over 45 years of successful clinical application. The SE approach releases traumatic shock, which is key to transforming PTSD and the wounds of emotional and early developmental attachment trauma. THE SECRET OF MASS By Ron Alvarez THE SECRET OF MASS By Ron Alvarez The "secret of mass" is a new theory of everything that provides answers to many unresolved questions and proves that the atom is alive and is fundamental life form. *The secret of mass predicted the origins and existence of electronic DNA. Chemical bonds are electrical information that originates from the unified field and is responsible for creating or manifesting matter in the universe from energy via a energy to mass conversion.

Traits of an Empath Updated July 12, 2016. Empathy is the ability to read and understand people and be in-tune with or resonate with others, voluntarily or involuntarily of one's empath capacity. Empaths have the ability to scan another's psyche for thoughts and feelings or for past, present, and future life occurrences. Many empaths are unaware of how this actually works, and have long accepted that they were sensitive to others. 11 Signs That You or Someone You Know is an Empath