Curiosity. Step inside the Large Hadron Collider (360 video) - BBC News. Physicists Test the Response Time of Electrons. Attosecond flashes of visible light make it possible to measure the delay with which electrons react to the exciting light because of their inertia. 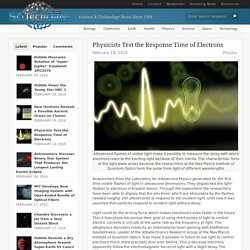 The Experiment That Will Allow Humans to “See” Quantum Entanglement. Entanglement is the strange phenomenon in which two quantum particles become so deeply linked that they share the same existence. 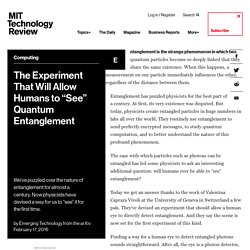 When this happens, a measurement on one particle immediately influences the other, regardless of the distance between them. Entanglement has puzzled physicists for the best part of a century. At first, its very existence was disputed. But today, physicists create entangled particles in huge numbers in labs all over the world. They routinely use entanglement to send perfectly encrypted messages, to study quantum computation, and to better understand the nature of this profound phenomenon. The ease with which particles such as photons can be entangled has led some physicists to ask an interesting additional question: will humans ever be able to “see” entanglement? Physicists Test Classic Paradox 'Maxwell's Demon' with Beams of Light. In 1867, renowned physicist James Clerk Maxwell wrote a letter to fellow physicist and middle-name enthusiast Peter Guthrie Tait in which he outlined a thought experiment that seemed to allow for the violation of the second law of thermodynamics. 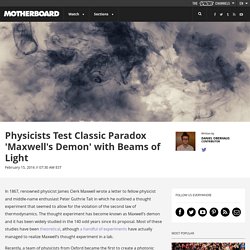 The thought experiment has become known as Maxwell’s demon and it has been widely studied in the 140 odd years since its proposal. Most of these studies have been theoretical, although a handful of experiments have actually managed to realize Maxwell’s thought experiment in a lab. Recently, a team of physicists from Oxford became the first to create a photonic Maxwell’s Demon. How We Entered a New Era of Astronomy. Last week, a new era of astronomy began as Laser Interferometer Gravitational-Wave Observatory executive director David Reitze stood before a packed room at the National Press Club in Washington, DC, uttering the words we’ve been waiting a century to hear: “We’ve detected gravitational waves.” 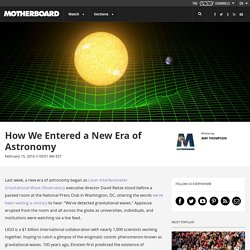 Applause erupted from the room and all across the globe as universities, individuals, and institutions were watching via a live feed. LIGO is a $1 billion international collaboration with nearly 1,000 scientists working together, hoping to catch a glimpse of the enigmatic cosmic phenomenon known as gravitational waves. 100 years ago, Einstein first predicted the existence of gravitational waves as part of his theory of general relativity, which says that space and time are not two separate entities, but part of a dynamic, interwoven fabric called space-time.

Gravitational Waves vs. Gravity Waves: Know the Difference! So it looks like we'll be talking a lot about gravitational waves over the coming days, but why can't they be called "gravity waves? 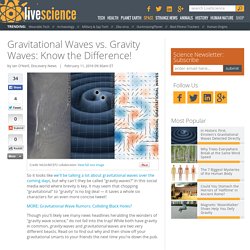 Have Einstein's gravitational waves finally been found? Albert Einstein in Princeton, 1954 "My earlier rumour about LIGO has been confirmed by independent sources. 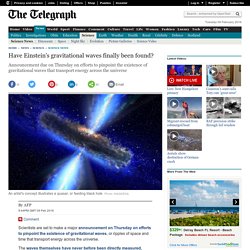 Stay tuned! Gravitational waves may have been discovered! Exciting," said a message on Twitter from Arizona State University cosmologist Lawrence Krauss, who does not work with LIGO. His words sparked a firestorm of speculation. An announcement will be made Thursday at 10:30am (1530 GMT) at the National Press Club in the US capital, Washington. The event brings "together scientists from Caltech, MIT and the LIGO Scientific Collaboration to update the scientific community on efforts to detect them," a National Science Foundation statement read. • Ten groundbreaking university research projects. Gravitational Waves vs. Gravity Waves: Know the Difference! So it looks like we’ll be talking a lot about gravitational waves over the coming days, but why can’t they be called “gravity waves”? 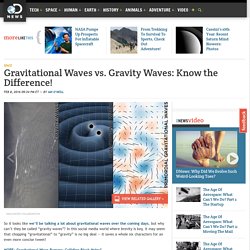 In this social media world where brevity is key, it may seem that chopping “gravitational” to “gravity” is no big deal — it saves a whole six characters for an even more concise tweet! MORE: Gravitational Wave Rumors: Colliding Black Holes? Though you’ll likely see many news headlines heralding the wonders of “gravity wave science”, do not fall into the trap! While both have gravity in common, gravity waves and gravitational waves are two very different beasts. Read on to find out why and then show off your gravitational smarts to your friends the next time you’re down the pub.

Gravitational Waves are, in their most basic sense, ripples in spacetime. Forbes Welcome. Science on Flipboard. M.curiosity. High-capacity battery cathode prelithiation to offset initial lithium loss : Nature Energy. Scientists struggle to stay grounded after possible gravitational wave signal. Not for the first time, the world of physics is abuzz with rumours that gravitational waves have been detected by scientists in the US. 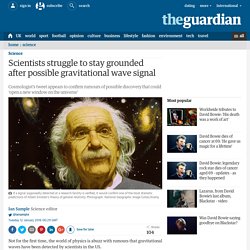 Lawrence Krauss, a cosmologist at Arizona State university, tweeted that he had received independent confirmation of a rumour that has been in circulation for months, adding: “Gravitational waves may have been discovered!!” The excitement centres on a longstanding experiment known as the Advanced Laser Interferometer Gravitational-Wave Observatory (Ligo) which uses detectors in Hanford, Washington, and Livingston, Louisiana to look for ripples in the fabric of spacetime.

According to the rumours, scientists on the team are in the process of writing up a paper that describes a gravitational wave signal. If such a signal exists and is verified, it would confirm one of the most dramatic predictions of Albert Einstein’s century-old theory of general relativity. Speaking about the LIGO team, Krauss said: “They will be extremely cautious. 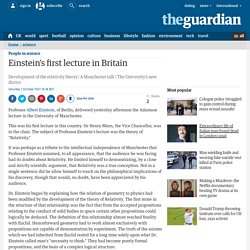 This was his first lecture in this country. Sir Henry Miers, the Vice Chancellor, was in the chair. Gadget Lab. The Stanley’s bio-pharma operation is just one example of the ways science and tech are transforming every aspect of the industry—from growing to harvesting to packaging to retailing to consuming—as this black (and gray) market emerges into the sunlight of legitimate commerce. 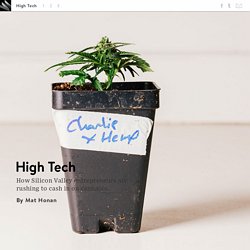 Start with indoor farms, which are massively energy-intensive. Their high-pressure sodium lights, which themselves require large amounts of electricity, can send temperatures soaring. Yet marijuana plants need to stay cool and dry. Traditionally, growers have handled this dilemma by using electricity-gulping HVAC compressors. Colorado company Surna saw opportunity here. Einstein Podolsky Rosen Argument and the Bell Inequalities. In 1935, Einstein, Podolsky, and Rosen (EPR) published an important paper in which they claimed that the whole formalism of quantum mechanics together with what they called a “Reality Criterion” imply that quantum mechanics cannot be complete. That is, there must exist some elements of reality that are not described by quantum mechanics.

They concluded that there must be a more complete description of physical reality involving some hidden variables that can characterize the state of affairs in the world in more detail than the quantum mechanical state. This conclusion leads to paradoxical results. As Bell proved in 1964, under some further but quite plausible assumptions, this conclusion that there are hidden variables implies that, in some spin-correlation experiments, the measured quantum mechanical probabilities should satisfy particular inequalities (Bell-type inequalities). A theoretical computer scientist has presented an algorithm that is being hailed as a breakthrough in mapping the obscure terrain of complexity theory, which explores how hard computational problems are to solve.

Last month, László Babai, of the University of Chicago, announced that he had come up with a new algorithm for the “graph isomorphism” problem, one of the most tantalizing mysteries in computer science. The new algorithm appears to be vastly more efficient than the previous best algorithm, which had held the record for more than 30 years. His paper became available today on the scientific preprint site arxiv.org, and he has also submitted it to the Association for Computing Machinery’s 48th Symposium on Theory of Computing.

For decades, the graph isomorphism problem has held a special status within complexity theory. While thousands of other computational problems have meekly succumbed to categorization as either hard or easy, graph isomorphism has defied classification. Einstein’s Parable of Quantum Insanity. “Insanity is doing the same thing over and over and expecting different results.” That witticism — I’ll call it “Einstein Insanity” — is usually attributed to Albert Einstein. Though the Matthew effect may be operating here, it is undeniably the sort of clever, memorable one-liner that Einstein often tossed off. And I’m happy to give him the credit, because doing so takes us in interesting directions.

First of all, note that what Einstein describes as insanity is, according to quantum theory, the way the world actually works.