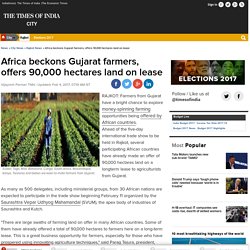 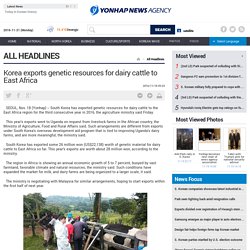 This year's exports went to Uganda on request from livestock farms in the African country, the Ministry of Agriculture, Food and Rural Affairs said. Such arrangements are different from exports under South Korea's overseas development aid program that is tied to improving Uganda's dairy farms, and are more meaningful, the ministry said.

South Korea has exported some 26 million won (US$22,138) worth of genetic material for dairy cattle to East Africa so far. This year's exports are worth about 28 million won, according to the ministry. The region in Africa is showing an annual economic growth of 5 to 7 percent, buoyed by vast farmland, favorable climate and natural resources, the ministry said. PressTV-'Iran to grow rice, wheat in Africa' Iran is reportedly looking to lease land in Kenya, Uganda and Tanzania for large-scale food production to serve local and export markets. 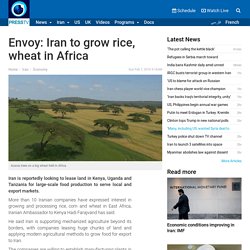 More than 10 Iranian companies have expressed interest in growing and processing rice, corn and wheat in East Africa, Iranian Ambassador to Kenya Hadi Farajvand has said. He said Iran is supporting mechanized agriculture beyond its borders, with companies leasing huge chunks of land and applying modern agricultural methods to grow food for export to Iran. The companies are willing to establish manufacturing plants in the region to cater to the local market and to export to Iran, Farajvand said. The move is also aimed at narrowing trade deficit with the Horn of Africa countries, which is in Iran’s favor, he added. The East African Community (EAC) mainly exports unprocessed agricultural products like tea, coffee and meat to Iran. Local trade experts said the region should strive to export more processed goods to Iran, beginning this year. Namibia announces joint ag plan with Indonesia.

Namibia announces joint ag plan with Indonesia This week, ending 2nd September, the governments of Namibia and Indonesia will be putting into action the ambitious joint agriculture plan that has been dormant since the signing of a memorandum of understanding between the two countries in March 2011. 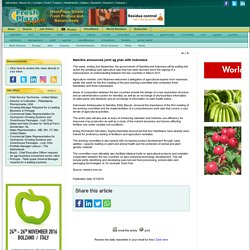 Agriculture minister John Mutorwa welcomed a delegation of agricultural experts from Indonesia earlier this week for the first meeting of the joint working committee that comprises three Namibians and three Indonesians. Areas of cooperation between the two countries include the design of a new quarantine structure and an administrative system for Namibia, as well as an exchange of phytosanitary information on plant pests and diseases and an exchange of information on plant health status. How Ethiopian famine inspired Japanese to start modern farming for Africa - Daily Nation.

By AGGREY MUTAMBOMore by this Author The meeting was a symposium on agriculture and Japanese Prime Minister Shinzo Abe who was in Nairobi for the Tokyo International Conference on African Development (Ticad) was to give an address. 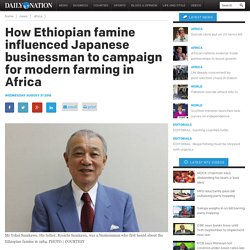 Titled, Contributing to Social Security and Jobs through Agriculture, it drew economists, donors, development bankers and government ministers to a plenary hall at the Kenyatta International Convention Centre (KICC). “I have heard that in Africa in years past, there was a widespread understanding that producing a single crop bound for export was what was considered ‘agriculture,’ Mr Abe said, referring to Africa’s subsistence agriculture. The story of farming in Africa and how it recycle our poverty was always going to come up at this type of meeting. The forum offered a chance to debate policy, critique failure to adopted modern technology even as all experts generally agreed it was the reason Africa’s agriculture lags behind. 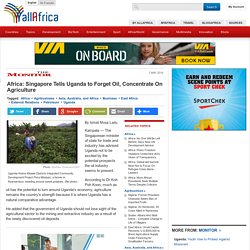 (file photo) By Ismail Musa Ladu Kampala — The Singaporean minister of state for trade and industry has advised Uganda not to be excited by the potential prospects the oil industry seems to present. 「土地を生かし、農業に生きる～UNAC(全国農民連合)の取り組み」part2. 「土地を生かし、農業に生きる～UNAC(全国農民連合)の取り組み」part1. KAFACI English Homepage. Indian Companies to Join Hands with African Companies for Sufficient Production: Radha Mohan Singh. NEW DELHI: Radha Mohan Singh, Minister for Agriculture, Government of India, suggested here today that Indian companies desirous of investing in Africa could join hands with African companies for the production of pulses and vegetable oils, the supply of which is insufficient to meet this country’s demand. 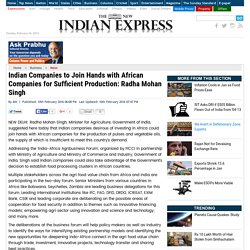 Addressing the ‘India-Africa Agribusiness Forum’, organized by FICCI in partnership with Ministry of Agriculture and Ministry of Commerce and Industry, Government of India, Singh said Indian companies could also take advantage of the Government’s decision to establish food processing clusters in African countries. Multiple stakeholders across the agri food value chain from Africa and India are participating in the two-day Forum. Africa: Indian Spice Farmers Train African Farmers in Cultivation Practices. Press release Ginger and turmeric farmers and processors from Ethiopia and Rwanda learn cultivation techniques from Indian experts through the SITA project. 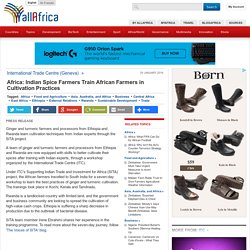 A team of ginger and turmeric farmers and processors from Ethiopia and Rwanda are now equipped with skills to better cultivate their spices after training with Indian experts, through a workshop organized by the International Trade Centre (ITC). Under ITC's Supporting Indian Trade and Investment for Africa (SITA) project, the African farmers travelled to South India for a seven-day workshop to learn the best practices of ginger and turmeric cultivation. The trainings took place in Kochi, Kerala and Tamilnadu. Rwanda is a landlocked country with limited land, and the government and business community are looking to spread the cultivation of high-value cash crops. SITA team member Irene Ebrahimi shares her experience in the training programme. Will Saudi agricultural investments in Sudan leave Egypt high and dry? A Sudanese farmer works on his corn farm on the banks of the Nile River in Khartoum, Nov. 11, 2009. 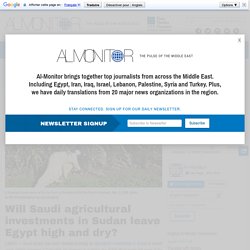 (photo by REUTERS/Mohamed Nureldin Abdallah) Author: Walaa Hussein Posted January 6, 2016. Ethiopia, Rwanda spice-farmers to receive training in South India. As part of its Supporting Indian Trade and Investment for Arica (SITA) project, the Geneva-based International Trade Centre (ITC) is collaborating with the Indian Spices Board, the Peermade Development Society in Idukki, and leading spice exporters from the Indian private sector to provide training and help boost productivity of farmers from Ethiopia and Rwanda. 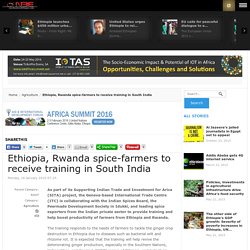 The training responds to the needs of farmers to tackle the ginger crop destruction in Ethiopia due to diseases such as bacterial wilt and rhizome rot. It is expected that the training will help revive the deteriorating ginger production, especially in the Southern Nations, Nationalities, and Peoples' (SNNP) region of Ethiopia, and help them adopt best practices to boost productivity and exports. The trainees from Rwanda will be oriented towards upscaling ginger production through the adoption of good agricultural practice (GAP), and be trained to identify and mitigate any diseases. Saudi companies to launch agricultural projects in Sudan’s Northern state. October 9, 2015 (KHARTOUM) - Sudanese government said it granted hundred acres of agricultural land in the Northern State to three major Saudi companies. A Sudanese farmer harvests sorghum produced from seeds donated by the Food and Agriculture Organization (FAO) through the "Improving Seeds" project. 11 December 2006 (UN Photo/Fred Noy ) Sudan’s minister of investment, Mudather Abdel-Ghani, announced that the Saudi companies Almarai, Tabuk and Alsafi have been granted 100 acres of agricultural land along the River Nile west of the town of Al-Golid.

Abdel-Ghani on Thursday has discussed with the general manager of Almarai Mohammed Rasheed Al-Balawi the implementation of the production infrastructure of the agricultural projects. Al-Balawi pointed out that the three companies have allocated $300 million for the; saying that Alsafi is currently completing new irrigation systems for the pilot project which would soon enters the circle of production. Tata to focus on agri-business in Africa. MUMBAI. – Tata International Ltd, the trading and distribution arm of Tata Group, is focusing on the agri commodities segment to grow its business in Africa after achieving a significant market penetration in the infrastructure (automobiles, construction equipment, and farm equipment) and the healthcare sector there.

The African subsidiary of the Mumbai-based company is planning to make investment in setting up processing units for exporting pulses from Tanzania, the largest producer of the crop in Africa, a top official said. Tata Africa Holdings (Tanzania) Ltd, a step-down subsidiary of Tata International, has already started exporting pulses to India from Tanzania 18 months ago and having achieved a volume of 5 000 tones of pulses in 2015, the company is now planning to scale up the business. “We are now exporting pulses (tur dal) from Tanzania, which are well accepted in India. UAE’s food security lies in Africa – Al Mansouri. UAE non-oil trade with Africa reaches $32 billion, Al Ghurair tells Africa Global Business Forum Dubai: The UAE’s future food security lies in Africa, UAE Minister of Economy Sultan Bin Saeed Al Mansouri told delegates at the Africa Global Business Forum. In his keynote speech at the forum, being held at the Atlantis Hotel, Palm Jumeirah, Al Mansouri pointed to a long trading history between the Gulf and sub-Saharan Africa, particularly East Africa.

The continent has 1.1 billion people and a growth rate between 4 and 4.5 per cent, he said, representing great opportunity for investors, with significant developments in industry, infrastructure and investment. “We understand how important Africa is,” he said. Yet “the UAE investor has challenges in Africa. “We were at the Cape before the Europeans,” he said. Dubai billionaire expands in Algeria in push for food security. The $40m storage unit will have capacity to hold 165,000 metric tons of grains, Essa Al Ghurair says Dubai: Al Ghurair Resources LLC, the agricultural commodities trader owned by one of the richest men in the UAE, will add another grain silo in Algeria to its holdings by the end of this year as part of a strategy to secure food supplies for growing populations from the Middle East to Asia. The $40 million (Dh147 million) storage unit will have capacity to hold 165,000 metric tonnes of grains, Essa Al Ghurair, chairman of Al Ghurair Resources, said in an interview in Dubai.

It will add to the company’s existing grain-processing mill in Algeria and others in Sudan, Lebanon, Sri Lanka and the UAE, where sister company Al Ghurair Foods owns the nation’s largest flour mill with capacity of 2,400 tonnes a day. Fontana Flowers to invest US$11mn in Ethiopia. Ethiopia exported about US$245mn worth of horticultural products in the 2013-14 fiscal year.

Thinkstock India is the world’s largest milk producer with a production of about 140 million tons each year, but even with this dairy firms from the Asian nation of over a billion people is looking for better margins for their produce in African markets. FG urges Thailand investments in Nigeria’s rice, other sub-sectors. L'Algérie et l'Inde veulent créer des sociétés mixtes dans le domaine agricole.