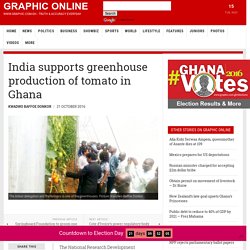 As part of the pilot project, the CRI has organised a one-day training workshop for some selected tomato farmers in the new technology of greenhouse tomato cultivation. The training, which formed part of a technology transfer agreement between the government of Ghana and India, will enable the farmers to cultivate tomatoes all year round and also improve on their income. The farmers, who were drawn from all the tomato producing areas, were taken through a demonstration farm at the Soil Research Institute of the Council for Scientific and Industrial Research (CSIR) at Kwadaso in Kumasi where they were taken through the process of the preparing the greenhouse for the cultivation.

Project Manager He said the technology was such that the farmer could control the conditions within the chamber for the plant to grow. Rice farmers in the Upper West Region have adapted Feed the Future-ATT Technology 16. How this Ghanaian turned the moringa plant into a business. The article below on how Ghanaian Ben Ajofu﻿﻿ is making a business from moringa, first appeared in Forbes Africa and is republished with its permission. 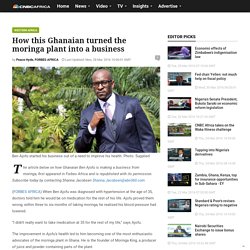 Subscribe today by contacting Shanna Jacobsen Shanna.Jacobsen@abn360.com﻿﻿﻿﻿ (FORBES AFRICA) When Ben Ajofu was diagnosed with hypertension at the age of 35, doctors told him he would be on medication for the rest of his life. Ajofu proved them wrong; within three to six months of taking moringa, he realised his blood pressure had lowered. “I didn’t really want to take medication at 35 for the rest of my life,” says Ajofu. 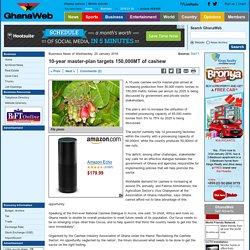 70% of Ghana's Rice Imported Annually. A report by the Chairman of the Volta Rice Producers Network, Mr. 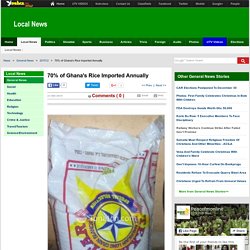 Billy Anyeme Agbotse has disclosed that 70% of Ghana's need for rice is imported with an estimated amount of $500m annually. This he said could be averted if the Volta Region's potential of producing rice were fully honoured and steps were also taken to support rice farmers in the country with the necessary inputs and matching implements. He stated that, the rice potentials of the region remain an untapped natural resource that is capable of solving the country's food needs, elevating rural poverty and creating worth. "..we are challenged so we beg of government to resource us with micro machines of which we would pay on monthly basis to improve our work and also save us much time," he added. Ghana Aquaculture Production Grows 20% in 2015. News Ghana Aquaculture Production Grows 20% in 2015 10 December 2015. 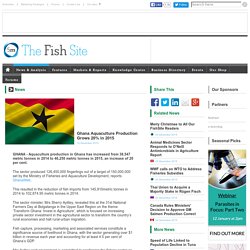 Palm Oil: Possibly Ghana's Biggest Income Earner - Footprint to Africa. The Oil Palm Development Association of Ghana (OPDAG) has repositioned itself in its quest to ensure that Ghana moves from being a net importer of palm oil to a net exporter of the commodity in the next five to 10 years. 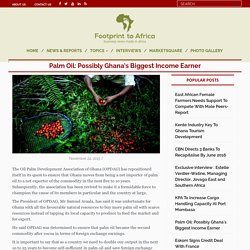 Subsequently, the association has been revived to make it a formidable force to champion the cause of its members in particular and the country at large. The President of OPDAG, Mr Samuel Avaala, has said it was unfortunate for Ghana with all the favourable natural resources to buy more palm oil with scarce resources instead of tapping its local capacity to produce to feed the market and for export. He said OPDAG was determined to ensure that palm oil became the second commodity after cocoa in terms of foreign exchange earnings.

It is important to say that as a country we need to double our output in the next 10 to 25 years to become self-sufficient in palm oil and save foreign exchange which otherwise goes into its importation. Related. Better feed development, improved poultry sector may lead to agro economic boost in Ghana. The group will be working with several partners including Kansas State University and the Adventist Development and Relief Agency (ADRA) as well as with partners in the Ghanaian government and agricultural academics for the five-year project, said Jim Hershey, executive director of WISHH. 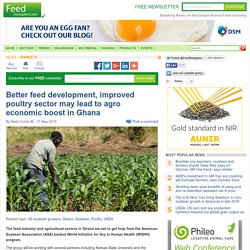 The project, which should benefit US soybean growers, as well as the Ghanaian poultry and feed sectors, is funded through a $15m food for progress from the USDA, - a program with two principal objectives: to improve agricultural productivity and to expand trade of agricultural products. “It’s a program that’s really aimed at developing rural agriculture and economic systems,” Hershey told FeedNavigator. “We know that the benefit of rural development is economic growth, which usually means improved nutrition and expanded trade.” WISHH members have already worked on agricultural development projects in several parts of Africa including in Liberia, Cameroon and Kenya. Ghana to commercialize GM crops in three years.

Despite the sustained campaign against the introduction of commercial genetically modified organisms (GMOs) in Ghana, including a protracted legal battle, Ghana is likely to commercialize GMOs in three years, according to information sourced by ghanabusinessnews.com. 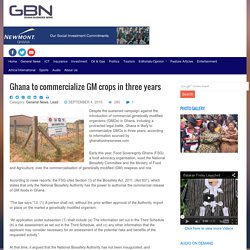 Early this year, Food Sovereignty Ghana (FSG) a food advocacy organisation, sued the National Biosafety Committee and the Ministry of Food and Agriculture, over the commercialisation of genetically modified (GM) cowpeas and rice. Opinion divided over pineapple exports. Business News of Wednesday, 23 September 2015 Source: Graphic.com.gh File photo Pineapple exporters and the Ghana Export Promotion Authority (GEPA) are sharply divided over factors that have accounted for the decline in foreign exchange derived from exporting fresh pineapples. 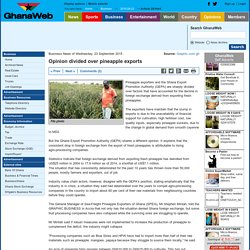 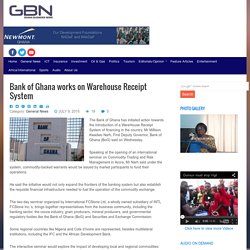 Speaking at the opening of an international seminar on Commodity Trading and Risk Management in Accra, Mr Narh said under the system, commodity-backed warrants would be issued by market participants to fund their operations. Bui dam reservoir boosts local fishing industry. Fish farming in Ghana -Development challenges. Farmerline: using mobile phones to help farmers in Ghana. Agriculture is one of Ghana’s key sectors, contributing 22% to the country’s gross domestic product and employing 42% of its workers. With an average farm size of about 1.2 hectares, most farmers in Ghana are small-scale. Many of these small-scale farmers struggle with low yield and high post-harvest losses, partly due to their lack of access to agriculture information. Ghana only has one extension agent for every 2,000 farmers, and poor road and communications infrastructure make access to market information particularly difficult for farmers.

Farmerline’s solution Farmerline Ltd tackles this challenge by bridging this information gap through the use of mobile technology. All of the company’s services are offered via SMS, and Android as well as voice-based messaging service to help reach farmers with low literacy levels. Farmerline’s impact. Ghana - Revolutionizing agribusiness. British entrepreneur's small agribusiness has grown to become one of the largest employers in Ghana, with 2,500-strong workforce and group turnover circa £60 million ($96.1 million) Seventeen years ago Anthony Pile was an unemployed 50-year-old, retired from the British army and fired from his last job because his big ideas were not well received.

Fast forward to the present day and Mr Pile proudly oversees his own company, Blue Skies, a revolutionary business with a group turnover of circa £60 million, which has breathed new life into agriculture in Ghana. The company produces ‘fresh-cut fruits’ which are processed and packaged at source before being exported for sale in some of Europe’s top supermarkets. Blue Skies’ first factory in Ghana employed 35 people. Now the company employs 2,500 in the West African nation alone, with another four factories sprinkled around Africa and South America.

“It was a different scene when we started,” said Mr Pile. Mr Pile practices what he preaches. Ghana becomes first yam-producing nation to launch national strategy. Ghana set to double cashew production by 2016. Ghana’s cashew industry is to receive a major boost with technical and financial support from the government to double current production levels by 2016. As a result, 30 districts in five regions- Volta, Brong Ahafo, Upper West, Northern and Eastern- are to be used as pilot areas to increase production from the estimated 40,000 tonnes per year to about 80,000 tonnes. The Minister of Trade and Industry, Mr Haruna Iddrisu, made this known when a delegation from the Ghana Cashew Industry Association, paid a courtesy call on him at his office at the Ministries in Accra. “The support will go to small holder farmers in each of the six districts to be selected from a district to enable them to increase their production levels to meet the target set and this support will come for them to start immediately this year”, he said.