Will Programming Plants Feed the World? A state-of-the-art indoor farm in Japan that grows salad greens at high speed but high quality, in huge quantities. 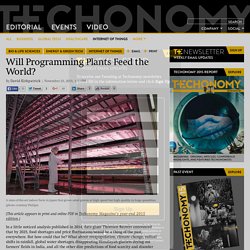 (photo courtesy Philips) (This article appears in print and online PDF in Techonomy Magazine’s year-end 2015 edition.) In a little noticed analysis published in 2014, data giant Thomson Reuters announced that by 2025, food shortages and price fluctuations would be a thing of the past, everywhere. Will Programming Plants Feed the World? How sustainable is vertical farming? The world's food system is beginning to strain under a global population expected to reach nine billion by 2050, by which time the planet's arable land is projected to be half of what it was in the 1970s. 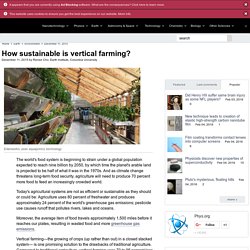 And as climate change threatens long-term food security, agriculture will need to produce 70 percent more food to feed an increasingly crowded world. Today's agricultural systems are not as efficient or sustainable as they should or could be: Agriculture uses 80 percent of freshwater and produces approximately 24 percent of the world's greenhouse gas emissions; pesticide use causes runoff that pollutes rivers, lakes and oceans. Moreover, the average item of food travels approximately 1,500 miles before it reaches our plates, resulting in wasted food and more greenhouse gas emissions.

Vertical farming—the growing of crops (up rather than out) in a closed stacked system— is one promising solution to the drawbacks of traditional agriculture. "Most of the farms are new. Indoor Harvest. How sustainable is vertical farming? Farming in the Sky: Inside a Wall Street-Backed Vertical Farm. Now Playing Taking food to new heights: Inside a vertical farm Vertical farming isn’t new. 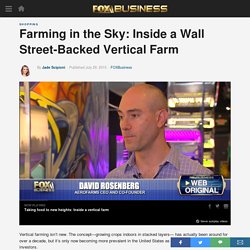 The concept—growing crops indoors in stacked layers— has actually been around for over a decade, but it’s only now becoming more prevalent in the United States as well as a hot new area for big investors. Goldman Sachs (GS), Prudential Financial (PRU), and RBH Group have partnered with a 10-year-old startup called Aerofarms to build the world’s largest vertical farm in Newark, N.J.

“We want to go where the mouths are. 'Mega' Indoor Vertical Farm: Chicago Suburb New Home To Nation's Largest Such Facility. BEDFORD PARK, Ill. — Farming in abandoned warehouses has become a hot trend in the Midwest – with varying degrees of success – as more entrepreneurs worldwide experiment with indoor growing systems in attempts to grow more food locally. 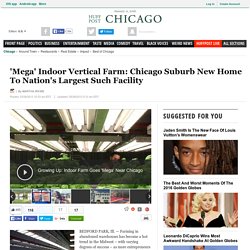 Now one facility, FarmedHere LLC in suburban Chicago, is attempting to take indoor warehouse farming to the "mega farm" level, in a region of the country known more for its massive hog, corn and soybean farms than for crops of boutique greens. Here's a run-down on the trend, this farm – and the challenges it and other indoor farms face. In Chicago, Milwaukee and other urban areas, entrepreneurs have taken up residence in vacant buildings that have high ceilings and plenty of space. Often, these are called "vertical" farms because, within the buildings, farmers build tall structures with several levels of growing beds, often lined with artificial lights. Fastcoexist. If you've mastered building flatpack bookcases, soon you'll be able to try building a flatpack urban farm. 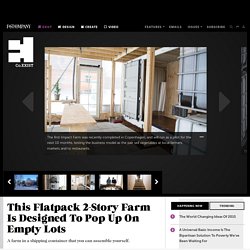 The new Impact Farm is a ready-made kit that shows up in an old shipping container. About 10 days later—after you figure out an instruction booklet that's a little more complicated than IKEA furniture, and put everything together—you'll end up with a two-story, indoor-outdoor farm that can grow over six tonnes of food in a year.

"The intention was to create a unit that is fast and relatively easy to set up with the unfulfilled potential of underutilized spaces of our large urban environments in mind," says Mikkel Kjær, one of the designers of the new kit. If a vacant lot is slated for development, the whole farm can be easily disassembled and moved somewhere else. Why the Future Is Bright for the World’s Poorest Farmers. I have probably learned more about farming in Africa from Sam Dryden than from any other person. 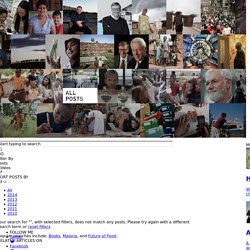 Sam has spent decades working in agriculture, including a stint at the Gates Foundation, and he is passionate about improving the lives of the poorest. So when he asked me to contribute to a series of articles in Foreign Affairs on the future of farming and its role in fighting poverty, I was happy to do it. My essay is below. You can download the whole series—which includes authors like Kofi Annan and Sir Gordon Conway—here (it’s a 4MB .pdf file).

One thing I’ve learned in my work with Microsoft is that the process of innovation tends to take longer than many people expect, but it also tends to be more revolutionary than they imagine. Twenty years ago, when the Internet was brand new, a lot of people thought computers would quickly become part of daily life in developing countries. Vertical Farming Market by Functional Device. The vertical Farming market is expected reach USD 3.88 Billion by 2020, at a CAGR of 30.7% between 2015 and 2020. 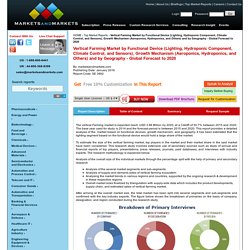 The base year used for study is 2014 and the forecast period is between 2015 and 2020. This report provides a detailed analysis of the market based on functional devices, growth mechanism, and geography. It has been estimated that the lighting segment based on the functional device would hold a large share of the market. Vertical Farming Market by Functional Device. US(IL): Vertical farming on rise with organic basil. Microgreens program also strong, new markets on horizonUS(IL): Vertical farming on rise with organic basil As aquaponic and hydroponic technology continues to advance, major players in the vertical farming industry are planning to expand into new products and new territories. 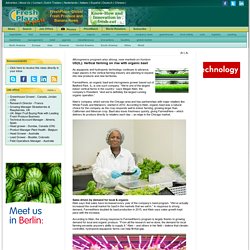 FarmedHere, an organic basil and microgreens grower based out of Bedford Park, IL, is one such company. “We’re one of the largest indoor vertical farms in the country,” says Megan Klein, the company’s President. “And we’re definitely the largest running organic operation.” Klein’s company, which serves the Chicago area and has partnerships with major retailers like Whole Foods and Mariano’s, started in 2010. Sales driven by demand for local & organic Klein says that sales have increased every year of the company’s basil program. According to Klein, the strong response to FarmedHere’s program is largely thanks to growing demand for local and organic produce. BrightFarms. SPREAD's Vegetable Factories. Dirt-Free Farming: Will Hydroponics (Finally) Take Off? By Eric Siegel on June 18, 2013 Illustrations by Jason Novak Zach Yohannes, an enthusiastic undergraduate at Stanford University, is refining an idea that he thinks could someday feed all of humankind with fresh, local food while using less land and fewer pesticides. 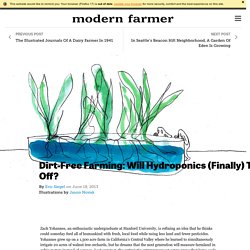 Yohannes grew up on a 1,500 acre farm in California’s Central Valley where he learned to simultaneously irrigate 20 acres of walnut tree orchards, but he dreams that the next generation will measure farmland in cubic meters instead of acreage. Last summer, the optimistic entrepreneur set out to prove that large-scale indoor hydroponic farming is not only possible, but also economically viable. In a hydroponic system, a nutrient-dense water solution circulates through the plants’ roots and replaces the need for soil and traditional fertilizers. Salad Inc. Can plant factories save us from climate change? 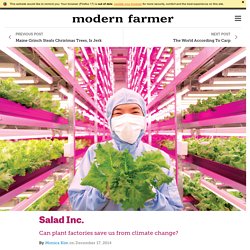 By Monica Kim on December 17, 2014 After an earthquake and tsunami decimated northeast Japan in 2011 — an unexpected weather incident that scientists are still struggling to understand — the Japanese government built Sanriku Fukko National Park. A triumph of weather-conscious design, built in part to revitalize the area’s flagging economy, the park boasts reconstructed pine forests, tidal flats and seagrass beds hugging the coast. And deep within the park’s faux-natural artifice sits exactly one farm. Say Hello To The (Soon To Be) World's Largest Indoor Vertical Farm. By Dan Nosowitz on March 17, 2015 Some 15 miles from Manhattan, monster investors are setting up what will be one of the most impressive indoor urban farming units in history. It's called AeroFarms. Vertical farming is typically done in tall buildings with lots of sunlight; abandoned skyscrapers are ideal.

But you can also reclaim less sunny industrial spaces that have fallen into disrepair, like this old Chicago meat-packing plant, or, in what may be one of the most impressive such farms ever planned, an old steel mill in Newark, New Jersey, just across the Hudson River from Manhattan. The World's First Robot Farm Requires No (Human) Farmers At All. By Dan Nosowitz on October 7, 2015 Indoor farming, hyper-futuristic and spotless high-tech farms, have long been pegged as a possible future of farming. They're low-profile, easy on the environment, and can be made to produce massive quantities of food, especially quick-growing crops like lettuces, very easily. Is the future of vegetable farming indoors? HOMER — The future of vegetable farming in upstate New York might be under plastic.

Behind a century-old yellow farmhouse on Route 11, an electric water pump bubbles away beneath translucent plastic sheeting on top of a simple metal greenhouse frame. The water is home to schools of tilapia, a hardy freshwater fish known as the species that miraculously fed the Biblical multitudes. The pumps lift the nutrient-rich water to three rows of troughs where floating plastic trays hold thousands of tiny baby arugulas, kales, cabbages, kohlrabies, red amaranth, cress and spicy mustard that can fetch $30 a pound from fine-dining restaurants in New York City. The plants take up the nutrients and help remove the ammonia the fish leave in the water. Contact Us - ARO. Urban Farming in Israel - LivinGreen. What is Urban Farming? Growing and processing Food products in urban areas. The growing takes place in flowerbeds within the city or outskirts of the city, on rooftops, vertical growing on walls (green walls), indoor growing and more.

Vegetables and other greens can be grown by Individuals in their back yard or balcony and up to commercial growing systems. Green In The City – An urban farming complex on Dizengoff Center’s rooftop Winter 2015 came, and along came Yarok Bair (Green In The City) – a joint venture between LivinGreen company as pioneers in the Hydroponic & Aquaponics sector, and Dizengoff Center as the first shopping mall ever built in Israel, located in the heart of Tel-Aviv. Israel a vertical farming hot spot? We’ll send in-depth vertical farming case studies straight to your inbox. Sign up here and make sure you don’t miss out.

You know that feeling when a hundred disparate conversations all start linking together? That’s how I feel about Israel right now. And it just might point to the next vertical farming hot spot. Vertical Harvest. Orphek LED Grow Lights. How To Build A Gravity-Based PVC Aquaponic Growing System…

Farmedhere indoor vertical farm. FarmedHere. In Newark, a Vertical Indoor Farm Helps Anchor an Area’s Revival. Scheduled to open this fall inside the new Ironbound site, AeroFarms projects it will reap up to 30 harvests a year, or two million pounds of greens, including kale, arugula and romaine lettuce, Mr. Rosenberg said. At that output, AeroFarms would be among the most productive vertical farms in the country, analysts say. Photo. Sky Vegetables - The Sky is the Limit! The Commercial Leader in Urban Agriculture and Farming. This Week in Virology - The Vertical Farm: Feeding the World in the 21st Century. WHAT IS VERTICAL FARMING?WHAT IS HYDROPONICS?WHAT ARE MICRO NUTRIENTS?ADVANTAGES OF VERTICAL FARMING? FOR PRELIMS AND MAINS GS PAP III. Vertical farming: Does it really stack up? WHEN you run out of land in a crowded city, the solution is obvious: build upwards.

Can Cities Feed Their Inhabitants? David Thorpe looks at the options A greenhouse developed by Priva, an international company that provides innovative solutions for the more efficient control of energy and water within indoor environments. FarmedHere. Green Spirit Farms. Indoor Harvest. This Week in Virology - The Vertical Farm: Feeding the World in the 21st Century. Orphek LED לגדול אורות - LED לגדול אורות. The Problem. - City Farms, Parks and Boston: Let’s Grow Up. Plantscapers could produce more with less. Sustainable Agricultural Partnerships Summit. TCLocal: food Archives. 180° Shift: When Local Means Your Kitchen. Hunger, Health and the Future of Food. Food Production in a Technology-driven Economy. Will Programming Plants Feed the World?

What are vertical farms, and can they really feed the world?