#IABR — An Urban Rooftop Farm In Downtown Rotterdam. If recent trends are any indicator, rooftops are the key towards making good, sustainable use of our built environment. 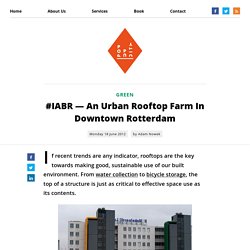 From water collection to bicycle storage, the top of a structure is just as critical to effective space use as its contents. Meet the Dakakker. As part of the 5th International Architecture Biennale Rotterdam, the Rotterdam Test Site has included the city’s first rooftop garden on top of the Schieblock building. The garden houses vegetables and herbs (and some bees, too!) , with the produce heading to local restaurants and a soon-to-be-opened shop. Perched 23.4 metres above the Schiekade, the Dakakker’s modest goal is to turn Downtown Rotterdam into a district that isn’t simply producing the city’s well-known exports (including architecture, logistics, consumer goods, and the Dutch voice of Scrooge McDuck), but also a source of fresh produce for the neighbourhood. More of our photos from the 5th International Architecture Biennale Rotterdam can be found on Flickr.

Top 5 Of The Greatest Urban Rooftop Farms. Urban farming has become one of the major international urban trends — a good reason for us to make a Top 5 of the greatest rooftop farms we’ve come across over the last years. 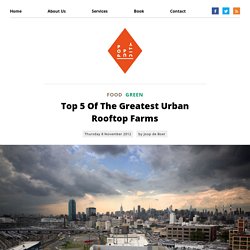 All over the world, people feel the need to start producing their food locally again. In cities, however, this is pretty difficult due to the lack of open spaces. The urban farming movement started in cities like Detroit that face a lot of vacancy. These shrinking cities have plenty of open space to produce locally grown vegetables. Nevertheless, increasing numbers of people in dense cities like New York, Tokyo and Hong Kong feel the urgent need to grow produce in their own city. 1. HK Farm is a relatively new farm in the amazingly dense city of Hong Kong.

Rooftop Gardens On Moving Buses. Environmental awareness has risen exponentially in recent years and people have regrown a strong urge to surround themselves with anything green amidst vast concrete jungles. 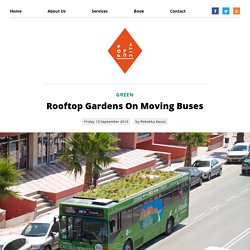 Vertical gardens, urban farming, guerrilla gardening are only a few phenomena that have only recently entered our daily lives. It is surprising why nobody had thought of it much earlier. Luckily, greening the city has gained a huge fan community. Landscape artist Marc Grañén, in collaboration with Grupo IRACO, takes it to the next level by using vehicle roofs as flower beds, turning unused space into little oases. In order to make rooftop gardens on vehicles possible Marc Grañén uses IRACO’s Aquapro SkyGardens which are phytokinetic gardens made of aquaponic foam embedded in a steel grid.

The Spanish artist has great ambitions to invade all types of vehicles with moving gardens. Algae Farming On Bangkok Rooftops. In Bangkok local downtown restaurants now serve fresh algae in their meals. 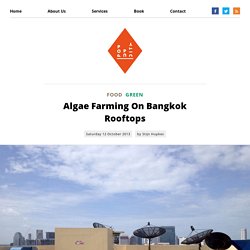 The innovative rooftop farmers of EnerGaia have discovered that the rooftops of the city’s skyscrapers are perfect spots for producting the green vitamin-rich power food. Eating slimy green algae is probably not the first thing you think about when you enter a Thai restaurant, but hey, it’s healthy and very local. In the past years the global urban farming movement has grown from a hobby club for hipsters into a serious business that finally has the power to make some change. The scene has its own supply chain, markets have grown mature, and we see the emerge of more efficient and intensified forms of urban food production. Aquaponics systems, mushroom farms, and now algae production focus on the core of the urban food issue while implementing innovative technologies. Japanese Commuters Grow Veggies On Train Station Rooftops. Rooftop farms have been established all over the world to enable growing food in dense urban areas. 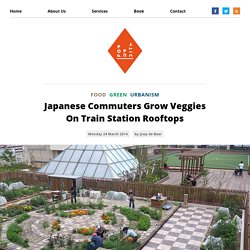 In Japan, a whole new kind of an urban rooftop farm was opened recently. Soradofarm is an urban agriculture project that uses the rooftops of train stations to accommodate urban gardens for waiting train passengers that want to use their transfer time to relax and train their gardening skills. The Japanese are famous for working hard and making long hours. At the five rooftops allotments of Soradofarm, commuters can jump out of their busy lifestyles for a moments to grow some fresh food. Apparently gardening is a very relaxing activity that gives people that pleasant feeling of regaining connection with Mother Earth.