The Commercial Leader in Urban Agriculture and Farming 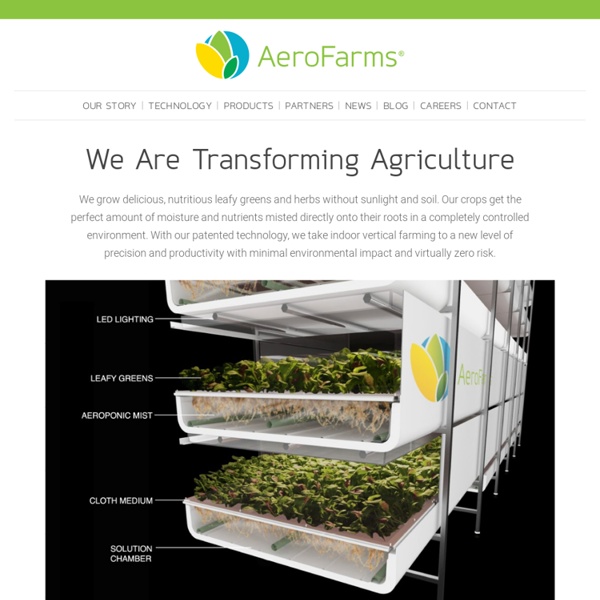 In Newark, a Vertical Indoor Farm Helps Anchor an Area’s Revival Scheduled to open this fall inside the new Ironbound site, AeroFarms projects it will reap up to 30 harvests a year, or two million pounds of greens, including kale, arugula and romaine lettuce, Mr. Rosenberg said. At that output, AeroFarms would be among the most productive vertical farms in the country, analysts say. NOLA Gets First Aeroponic Urban Farm Louisiana-based Aquaponic Modular Production Systems , an urban agriculture development company, just announced the debut of a project — the first aeroponic farm in New Orleans. The Tower Garden is hosted by Hollygrove Farm and Market to showcase an innovative, fast, and eco-friendly way to grow fresh produce for the community. The design is a closed-loop system that uses nutrient-enriched water, not soil, to grow food.

Progressive Plant Growing is a Blooming Business Progressive Plant Growing is a Blooming Business Soil. Water. Say that plants don't need them and people may think you've traded your cow -- and your good sense -- for a handful of beans. Aeroponics Close-up of lettuce and wheat grown in an aeroponic apparatus, NASA, 1998. Aeroponics is the process of growing plants in an air or mist environment without the use of soil or an aggregate medium (known as geoponics). The word "aeroponic" is derived from the Greek meanings of aero- (air) and ponos (labour). Aeroponic culture differs from both conventional hydroponics, aquaponics, and in-vitro (plant tissue culture) growing.

This Japanese Vertical Farming Company Wants to... Nuvege (also called “Green Green Earth”) is a hydroponic vertical farming company based out of Kyoto, Japan. Currently they only produce lettuces but they appear to be a well-established business. This is what they say about themselves and their technology: Nuvege’s innovative hydroponic technology is unlike any other conventional hydroponic system that exists today. Nuvege’s proprietary lighting network (NLN) uniquely increases the yield rate of vegetable growth by equalizing light emissions that also advance photosynthesis through increased levels of carbon dioxide. This Week in Virology - The Vertical Farm: Feeding the World in the 21st Century Product Description "The vertical farm is a world-changing innovation whose time has come. Dickson Despommier's visionary book provides a blueprint for securing the world's food supply and at the same time solving one of the gravest environmental crises facing us today."--Sting

Startup Profile: AeroFarms - Urban Agriculture Aeroponic Systems March 29, 2011 | Robert Puro People are moving in ever increasing numbers from rural areas into urban city centers. Global population is expected to increase by nearly 40% to 9 billion people in the next 40 years. Threats to agriculture from climate change, loss of arable land, pesticide resistance, and water shortages continue to grow more acute. As noted in our previous article “Urban and Agriculture Can Coexist,” cities and their attendant entrepreneurs will need to embrace urban agriculture in order to meet this future demand for food and ensure food security. Seedstock recently spoke with Ed Harwood, CEO of AeroFarms, whose company has created an aeroponic growing system (a controlled environmental agriculture system that grows produce without soil and without sun, all year round and in any location) with the potential to revolutionize and jumpstart the nascent urban agriculture movement and help to sustainably meet the food needs of a growing world.

Pasona O2: Urban Underground Farming Two years ago we first covered Tokyo's underground farm; It is called Pasona O2 and was set up as a means of providing agricultural training to young people who are having trouble finding employment and middle-aged people in search of a second career. Of course, since we first posted the interest in local food has increased dramatically and there has been much more interest in urban farming. We also came upon some new information: The Pasona Group has a traditional farm in Ogata, but they want the "freeters" (Japanese slackers who hop between part time jobs) to get a taste, so to speak. It also is open to middle-aged people in search of a second career.