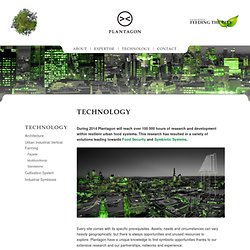 This research has resulted in a variety of solutions leading towards Food Security and Symbiotic Systems. Every site comes with its specific prerequisites. Assets, needs and circumstances can vary heavily geographically, but there is always opportunities and unused resources to explore. Plantagon have a unique knowledge to find symbiotic opportunities thanks to our extensive research and our partnerships, networks and experience. Real Live Vertical Farm Built In South Korea, Churning Out Lettuce. Image Credit Rural Development Administration We have been showing conceptual vertical farms for years, but in Suwon, South Korea they have one working and producing vegetables. It is a little three storey demonstration project in a nondescript building (image here), operating much like Dickson Despommier has described in his book, The Vertical Farm, right down to the airlocks and sterility he suggests is required.

Fabian Kretschmer and Malte E. Kollenberg write in Spiegel Online: Every person who steps foot in the Suwon vertical farm must first pass through an "air shower" to keep outside germs and bacteria from influencing the scientific experiment.....Heads of lettuce are lined up in stacked layers. The authors tour many of the vertical farms that we have shown on TreeHugger, and note what has traditionally been considered the major difficulty: The main problem is light -- in particular, the fact that sunlight has to be replaced by LEDs. But that is no longer necessarily true. Home. Hydro-Stacker Vertical Hydroponic Growing System. My Vertical Hydroponic Growing Setup. My Vertical Hydroponic Growing Setup When I built my hydroponic growing setup, I designed it with one main thing in mind - space, or rather the lack of it. 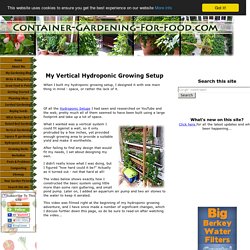 Of all the Hydroponic Setups I had seen and researched on YouTube and the web, pretty much all of them seemed to have been built using a large footprint and take up a lot of space. What I wanted was a vertical system I could fit against a wall, so it only protruded by a few inches, yet provided enough growing area to provide a suitable yield and make it worthwhile. After failing to find any design that would fit my needs, I set about designing my own. I didn't really know what I was doing, but I figured "how hard could it be? " The video below shows exactly how I constructed the basic system using little more than some rain guttering, and small pond pump. You can take the hydroponic growing hobby as far to the extreme as you choose and to many it's a real science. 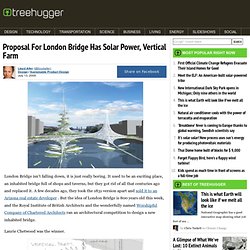 It used to be an exciting place, an inhabited bridge full of shops and taverns, but they got rid of all that centuries ago and replaced it. A few decades ago, they took the 1831 version apart and sold it to an Arizona real estate developer . But the idea of London Bridge is 800 years old this week, and the Royal Institute of British Architects and the wonderfully named Worshipful Company of Chartered Architects ran an architectural competition to design a new inhabited bridge. Laurie Chetwood was the winner. The judges wrote: A beautifully presented scheme, wildly imaginative yet very thoroughly considered, both in terms of its construction but also how it could sit within the wider context.

It has everything a TreeHugger could love, including a vertical farm, a farmers market, photovoltaics, a wind turbine, cafés and shops. London Bridge Future Powered By Solar and Stimulating The Economy With Fresh Produce. London bridge will be all pimped up in the future assuming this plan can come to fruition. 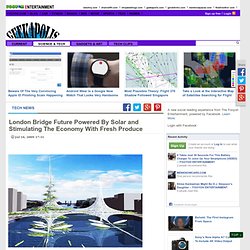 Futuristic designs suggest solar energy generators with a towering vertical farm. The latest design by Laurie Chetwood, envisions London Bridge as a sustainable structure, which generates renewable energy and organic food for the people of London. The next-gen proposal comes with a sprouting vertical farm in the midst of the Thames River. The bridge has been designed with solar and wind energy generating spires, which power a self-sufficient organic farm and commercial center. The design makes London Bridge a central meeting place for people to gather and also buy goods for their homes. Via: Inhabitat. TerraSphere - Home. BrightFarms - The Economist. Chicago's vertical farm and food business incubator.