Vertical farming: Does it really stack up? 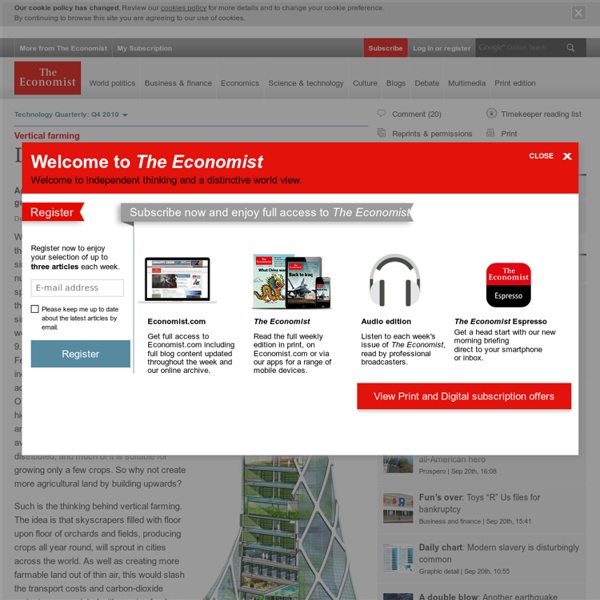 WHEN you run out of land in a crowded city, the solution is obvious: build upwards. This simple trick makes it possible to pack huge numbers of homes and offices into a limited space such as Hong Kong, Manhattan or the City of London. Mankind now faces a similar problem on a global scale. The world's population is expected to increase to 9.1 billion by 2050, according to the UN. Such is the thinking behind vertical farming. Better still, says Dr Despommier, the use of pesticides, herbicides and fungicides can be kept to a bare minimum by growing plants indoors in a controlled environment. A wide variety of designs for vertical farms have been created by architectural firms. “Without artificial lighting the result will be an uneven crop, as plants closest to the windows are exposed to more sunlight and grow more quickly.” The necessary technology already exists. He and his colleagues have created the South Pole Food Growth Chamber, which has been in operation since 2004. Related:  Vertical farms

WHAT IS VERTICAL FARMING?WHAT IS HYDROPONICS?WHAT ARE MICRO NUTRIENTS?ADVANTAGES OF VERTICAL FARMING? FOR PRELIMS AND MAINS GS PAP III | THE FORTUNE STROKE Ø Yes it's vertical because you are trying to grow more crops on a smaller land area and this usually means going upwards into buildings Ø It normally means that, instead of having a single layer of crops over a large land area, you have stacks of crops going upwards Ø It's also associated with city farming and urban farming Ø Who is "Dickson Despommier"? Ø Who is William Frederick Gericke? Ø Dickson Despommier, Columbia Microbiology Professor, is the Godfather of Vertical Farming Ø William Frederick Gericke, in the early 1930’s, pioneered hydroponics at the University of California at Berkley NB: Will read more about it WHY IS IT HAPPENING? Ø By the year 2050, nearly 80% of the earth’s population will reside in urban centers Ø Applying the most conservative estimates to current demographic trends, the human population will increase by about 3 billion people during the interim Ø At present, throughout the world, over 80% of the land that is suitable for raising crops is in use No not at all..!!

Can Cities Feed Their Inhabitants? David Thorpe looks at the options A greenhouse developed by Priva, an international company that provides innovative solutions for the more efficient control of energy and water within indoor environments. There are three dominant trends to which cities and national governments must respond in order to secure food supplies for their people. First, between 1980 and 2011 the global population not dependent on agriculture doubled to 4.4 billion, and, according to the Food and Agriculture Organization this population is growing at a rate about five times that of the agriculturally dependent population. Second, the amount of agricultural land available for growing food is declining and will soon start to be adversely affected by climate change. Third, in 2011 agricultural subsidies in the world’s top 21 food-producing countries totalled an estimated US$486bn. The growing of food in cities won’t mean that conventional agriculture will disappear. His personal website is: www.davidthorpe.info

Growing Skyscrapers: The Rise of Vertical Farms Together the world’s 6.8 billion people use land equal in size to South America to grow food and raise livestock—an astounding agricultural footprint. And demographers predict the planet will host 9.5 billion people by 2050. Because each of us requires a minimum of 1,500 calories a day, civilization will have to cultivate another Brazil’s worth of land—2.1 billion acres—if farming continues to be practiced as it is today. That much new, arable earth simply does not exist. To quote the great American humorist Mark Twain: “Buy land. They’re not making it any more.” Agriculture also uses 70 percent of the world’s available freshwater for irrigation, rendering it unusable for drinking as a result of contamination with fertilizers, pesticides, herbicides and silt. Select an option below: Customer Sign In *You must have purchased this issue or have a qualifying subscription to access this content

FarmedHere This Week in Virology - The Vertical Farm: Feeding the World in the 21st Century Product Description "The vertical farm is a world-changing innovation whose time has come. Dickson Despommier's visionary book provides a blueprint for securing the world's food supply and at the same time solving one of the gravest environmental crises facing us today."--Sting Imagine a world where every town has their own local food source, grown in the safest way possible, where no drop of water or particle of light is wasted, and where a simple elevator ride can transport you to nature's grocery store - imagine the world of the vertical farm. When Columbia professor Dickson Despommier set out to solve America's food, water, and energy crises, he didn't just think big - he thought up. Despommier takes readers on an incredible journey inside the vertical farm, buildings filled with fruits and vegetables that will provide local food sources for entire cities. A Look Inside Vertical Farm (Click on Images to Enlarge) Review “A book you will read, and then you will read it again. And so on.

In Newark, a Vertical Indoor Farm Helps Anchor an Area’s Revival Scheduled to open this fall inside the new Ironbound site, AeroFarms projects it will reap up to 30 harvests a year, or two million pounds of greens, including kale, arugula and romaine lettuce, Mr. Rosenberg said. At that output, AeroFarms would be among the most productive vertical farms in the country, analysts say. Photo But in an industry where profitability is elusive, success is hardly guaranteed. Comparing vertical farms can be tricky. Still, in real estate terms, the Ironbound operation would be among the country’s largest. In contrast, FarmedHere, an Illinois company, grows plants in about 47,000 square feet of a low-slung 93,000-square-foot former box factory near Chicago Midway International Airport. Mr. But in a sign of the risks inherent to the industry, other fledgling companies trying to grow crops in small spaces have sputtered and failed. If the industry is nascent, it can still attract big backers. Continue reading the main story

- City Farms, Parks and Boston: Let’s Grow Up Vertical Farm, photo credited to Valcent via www.economist.com It’s been days since Edward Glaeser published his urban farm-bashing piece in the Boston Globe, but I’m still annoyed. Glaeser, a professor of economics at Harvard University and director of the Rappaport Institute for Greater Boston, managed to argue against farms in a way that could extend to urban parks, gardens, zoos, swimming pools, and most sidewalks. He also ignored some intriguing trends in making urban farming more efficient, a.k.a. the Vertical Farm. But before I give you a view from the roof, let’s consider what’s happening on the ground. Now, just for fun, I’m going to substitute the word “park” for “farm” and “plants” for “food.” Who needs the Emerald Necklace when you can get plants from a florist? Of course, we do have parks. But really, the reason we still have most of our parks—with some glaring exceptions, like Wood Island—is that people like them, and are willing to work to protect them.

Sustainable Agricultural Partnerships Summit TCLocal: food Archives by Persephone Doliner What Is Processed Food? To process food is to make parts of plants and animals more edible than they would be in their unprocessed state. Manufactured products containing lots of chemicals and sweeteners, a class of processed foods, have given all processed foods a bad name. Who Needs Processed Food? Most of us. If you live in Tompkins County, eating locally raised foods year round requires eating stored or preserved foods, since the local growing season ends with the cold weather. Technique and Scale A few words about two key dimensions of food processing are in order, before discussion of its role in Tompkins under energy descent conditions. Here is a list of 21 generic, common techniques used to process food: baking, brewing, butchering, cleaning, confit, culturing, curing, drying, fermenting, freezing, grinding, heating, hulling, milling, pressing, pickling, refining, salting, smoking, sterilizing, sugaring, vacuum packing. What Processed Foods Are Needed Most?

180° Shift: When Local Means Your Kitchen Blanchet: My name’s Gabe Blanchet, I’m co-founder and CEO at Grove Labs. It’s a pleasure to be here. To start this off I’d like to see a show of hands, how many people in here have grown a plant? A windowsill basil plant all the way to a full-fledged farm? Awesome. So I’m kind of preaching to the choir here. We’ve raised a few million dollars, we’ve got a team of 14 in Somerville, Massachusetts and we’re about to unveil sort of the real product, which is a bookshelf sized unit where you can grow a significant amount of fruits and vegetables right in your kitchen, living room or dining room. Audience: That’s amazing. Blanchet: Thanks. So where we’re at right now, we’re really happy with our prototypes and we’re starting small-scale manufacturing.