NEWS: First national maps of pesticide and fertiliser use released These new products are part of the CEH Land Cover® plus series #landcover #data #waterquality…

Climate Change and Technology Define the Rural Future. Is aquaponics the future of food? Read more #agriculture… Dave Barker sur Twitter : "“The intensification of agriculture has had the biggest impact on wildlife, and this has been overwhelmingly negative … farming has changed dramatically, with new technologies boosting yields often at the expense of nature.” htt. Alternet. That white. It's not snow. It's plastic. This is not the way we should be growing vegetables.… Europe's Dirty Little Secret: Moroccan Slaves and a 'Sea of Plastic' - EcoWatch. Aquaculture could feed the world and protect the planet - if we get it right. What if we had the chance to reinvent the world’s food system and make local, more sustainable food the norm rather than the exception? 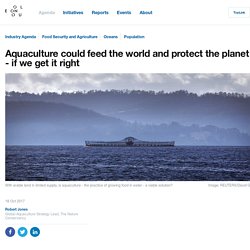 It might seem like a crazy idea, but with 9 billion people expected on our planet in by 2050, it’s a necessity. Experts agree that world food production will need to increase by 2050, but we can’t exponentially increase the amount of land or freshwater that would be required to meet that demand. With arable land in limited supply, some estimates indicate we only have 60 years of food production left in our soils if we continue with current agricultural practices. One food production sector that is growing rapidly is aquaculture—the practice of growing food in the water. Nearly every coastal country has significant potential to farm its oceans, and the global sector is poised to grow. Food production must get smarter. Aquaculture can use resources and space efficiently.

China just invented a rice that can grow in salt water and could feed millions. *****Drones, robots, GIS in agriculture. Not even agriculture can escape the drone explosion. 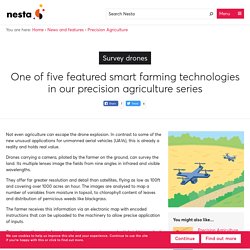 In contrast to some of the new unusual applications for unmanned aerial vehicles (UAVs), this is already a reality and holds real value. Drones carrying a camera, piloted by the farmer on the ground, can survey the land. Its multiple lenses image the fields from nine angles in infrared and visible wavelengths. They offer far greater resolution and detail than satellites, flying as low as 100ft and covering over 1000 acres an hour. VIDEO - 'Alien landing sites’ in China's Maowusu Desert, designed to combat #desertification. 18 May 1830. Briton Edwin Budding signed an agreement for his new invention, the lawn mower, to go into production. South Australia, Wet and Dry #NASA.

Interactive mirror made of 3,000 flowers responds to your movement. We could see getting into this. Growing crops in the Soviet retrofuture. Artist uncredited. Q & A: Egypt’s Greening Desert. Are we nearly there yet? Future in the past: #techfix in #agriculture (remote control was foreseen, not GPS) Soviet vision of the future. Excerpt from 1958 film 'It Happened In Pen'kov'. 'Imagine, there's a a tractor, but no one is inside it.' Al Jawf, Eastern Libya. Astronauts aboard the International Space Station used an 1150 mm lens to capture this photograph of a variety of agricultural patterns near an oasis in eastern Libya. 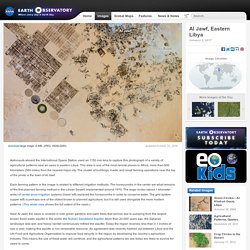 This area is one of the most remote places in Africa, more than 900 kilometers (560 miles) from the nearest major city. The cluster of buildings, roads, and small farming operations near the top of the photo is the town of Al Jawf. Each farming pattern in the image is related to different irrigation methods. In the future, will farming be fully automated? Image copyright CNH Industrial In the not-too-distant future, our fields could be tilled, sown, tended and harvested entirely by fleets of co-operating autonomous machines by land and air. 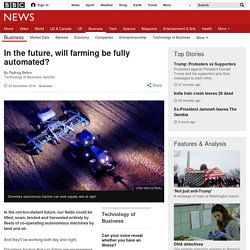 And they'll be working both day and night. Driverless tractors that can follow pre-programmed routes are already being deployed at large farms around the world. Drones are buzzing over fields assessing crop health and soil conditions. Ground sensors are monitoring the amount of water and nutrients in the soil, triggering irrigation and fertiliser applications. This massive farm grows 15% of Australia's tomatoes without soil, fresh water or fossil fuels.

Did you know there is a way to grow tons of fresh fruits and vegetables with saltwater and solar energy? 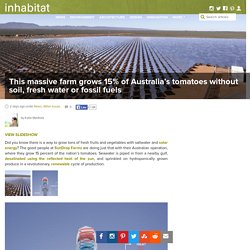 The good people at SunDrop Farms are doing just that with their Australian operation, where they grow 15 percent of the nation’s tomatoes. Seawater is piped in from a nearby gulf, desalinated using the reflected heat of the sun, and sprinkled on hydroponically grown produce in a revolutionary, renewable cycle of production. SunDrop Farms’ operation is fossil fuel-free, freshwater-free, and soil-free, eliminating the need for some of the most financially and environmentally costly elements in the agriculture business. The company told Aljazeera their sustainable method of growing produce slashes “26,000 tonnes of carbon dioxide” and 180 Olympic-sized swimming pools of fresh water each year, which is just what a rapidly growing population needs to offset human demand on Mother Earth. This world-first farm grows vegetables in the desert with nothing but Sun and seawater. Sundrop Farms in the South Australian desert manages to grow 17,000 tonnes of tomatoes every year using nothing but sunlight and seawater. 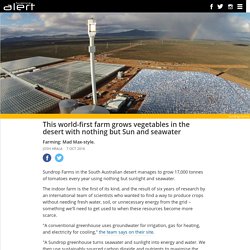 The indoor farm is the first of its kind, and the result of six years of research by an international team of scientists who wanted to find a way to produce crops without needing fresh water, soil, or unnecessary energy from the grid – something we'll need to get used to when these resources become more scarce. "A conventional greenhouse uses groundwater for irrigation, gas for heating, and electricity for cooling," the team says on their site. The Cocoon: a biodegradable vessel that nurtures tree growth in harsh and arid conditions Land Life Company Cocoon just planted – Inhabitat - Green Design, Innovation, Architecture, Green Building. 1958 'Imagine, there's a a tractor, but no one is inside it.' Autonomous tractor event with @CNHIndustrial tomorrow - watch out for some demos & follow @jeremy_morley too. TechFix: Water transfer #irrigation #remotesensing Near-infrared imagery of the Turkey/Syria border—Turkey's chlorophyll-rich crops contrast with Syria's fallow fields.

Self-fertilizing crops: Nitrogen fix. A Desert Full of Tomatoes, Thanks to Solar Power and Seawater. At first glance, growing fruit in the desert sounds like an awfully good way to feed a mushrooming global population and adapt to the worst effects of climate change. 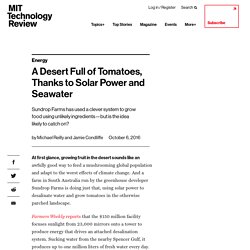 And a farm in South Australia run by the greenhouse developer Sundrop Farms is doing just that, using solar power to desalinate water and grow tomatoes in the otherwise parched landscape. Farmers Weekly reports that the $150 million facility focuses sunlight from 23,000 mirrors onto a tower to produce energy that drives an attached desalination system. This world-first farm grows vegetables in the desert with nothing but Sun and seawater.