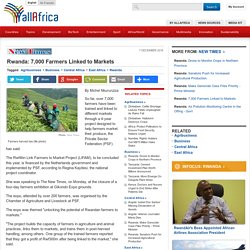 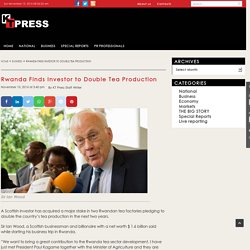 Sir Ian Wood, a Scottish businessman and billionaire with a net worth $ 1.6 billion said while starting his business trip in Rwanda. “We want to bring a great contribution to the Rwanda tea sector development. I have just met President Paul Kagame together with the Minister of Agriculture and they are very much behind this project,” Wood said. Wood who is also the chairman of The Wood Foundation (TWF) acquired 55% shares and 60% shares in Mulindi and Shagasha tea factories respectively. His foundation is working with more than 17,000 smallholder tea farmers from Northern and Western province respectively. Pigs will fly... to Rwanda. Mike Burke, chairman of VIVA, an Irish charity set up in 1999 by Longford veterinary surgeon Brendan Mimnagh, is currently drumming up support to help send these pigs to Rwanda, a country in central-east Africa devastated by genocide in 1994. 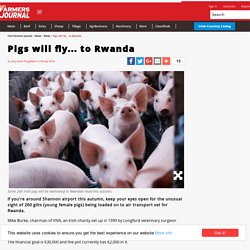 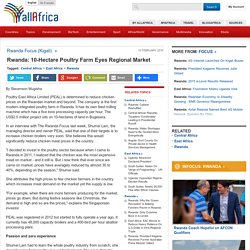 How silk farming is transforming lives of farmers, textile sector. Rwanda has made several over the years to help boost people’s earnings and living standards to spur national development. 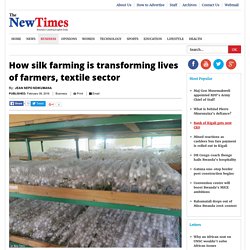 One such intervention was the introduction of sericulture, an agro-based industry that involves the rearing of silkworms to produce the raw silk, a natural protein fibre that serves as raw material for the textile industries. Introduced over 10 years ago, sericulture is one of the non-traditional sectors aimed at diversifying the agriculture industry, besides creating more jobs for the youth and women. Sericulture, also known as silk farming, is an agro-based industry that involves rearing of silkworms to produce raw silk. According to sector experts, the nascent industry presents the investors immense opportunities that could help spur growth and the country’s exports, and strengthen the local textile industry.

“Silk farmers are earning good money from selling silk cocoons, which has made it easy for them to support their households. Farmers speak out Challenges. Rwanda: Coffee Export Revenues Increase to Over Rwf43 Billion in November 2015. By Peterson Tumwebaze Rwanda exported 17.3 million kilogrammes of coffee during the first 11 months of 2015 to November, up from 15.1 million kilogrammes in 2014, reflecting a 14.61 per cent growth. 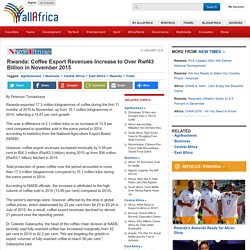 This was a difference of 2.1 million kilos or an increase of 13.9 per cent compared to quantities sold in the same period in 2014, according to statistics from the National Agriculture Export Board (NAEB). However, coffee export revenues increased minimally by 0.58 per cent to $56.3 million (Rwf43.3 billion) during 2015 up from $56 million (Rwf43.1 billion) fetched in 2014. Total production of green coffee over the period amounted to more than 17.3 million kilogrammes compared to 15.1 million kilos during the same period in 2014. According to NAEB officials, the increase is attributed to the high volume of coffee sold in 2015 (13.85 per cent) compared to 2014). Rwanda planting 30 million trees to save environment. President Kagame and former minister of Land Christopher Bazivamo in Umuganda. 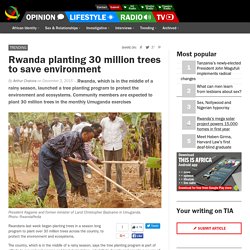 Photo: RwandaPedia Rwandans last week began planting trees in a season long program to plant over 30 million trees across the country, to protect the environment and ecosystems. The country, which is in the middle of a rainy season, says the tree planting program is part of efforts to prevent soil erosion and land degradation, rehabilitate forests and provide a source of fuelwood. RWANDA LAUNCHES IRRIGATION & MECHANIZATION TRAINING. Rwanda issues new guidelines for dairy industry. The new regulations aim at promoting hygiene and standardising dairy production in the country. 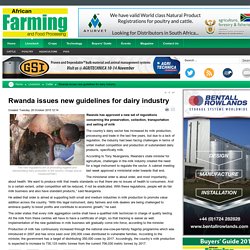 (Image source: meaduva/Flickr) The country’s dairy sector has increased its milk production, processing and trade in the last few years, but due to a lack of regulation, the industry had been facing challenges in terms of unfair market competition and production of substandard dairy products, specifically milk. Rwanda aims to close wheat gap. Untitled. By Emmanuel Ntirenganya Richard Nkundimana uprooted his old banana plantation to embrace a new and improved banana variety. 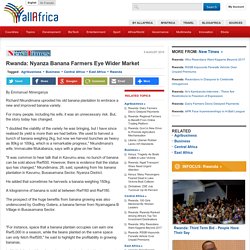 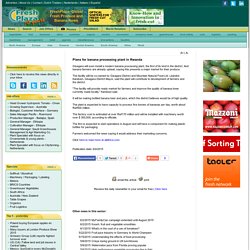 And banana farmers are already upbeat, saying this presents a major market for their produce. The facility will be co-owned by Gisagara District and Mountain Natural Food Ltd. Léandre Karekezi, Gisagara District Mayor, said the plant will contribute to development of farmers and the district. "The facility will provide ready market for farmers and improve the quality of banana brew currently made locally," Karekezi said. It will be making bottled banana beer and juice, which the district believes would be of high quality.

The plant is expected to have capacity to process five tonnes of bananas per day, worth about Rwf500 million. The factory cost is estimated at over Rwf170 million and will be installed with machinery worth over $ 300,000, according to officials. Farmers welcomed the news saying it would address their marketing concerns. Index1. How Maize Production in Rwanda Has Grown by 213%, Reports KT Press. KIGALI, Rwanda, Oct. 22, 2014 /PRNewswire/ -- President Paul Kagame says individual countries cannot develop with closed borders, urging the East African region to overcome the colonial mindset to be able to increase trade. Kagame was speaking at the annual East Africa Business Summit, attended by business executives and governments from Rwanda, Kenya, Uganda, Tanzania and Burundi. Kenya's President Uhuru Kenyatta, the Chairperson of East African community (EAC), attended the summit.

Kagame said Rwanda and Kenya are benefiting from the single tourist visa, national ID for travel between the two countries and the work permits fees waiver. Rwandan farmers gain from EAX.