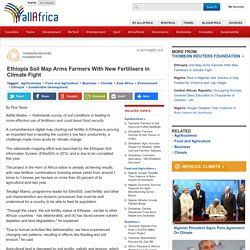 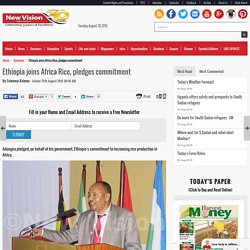 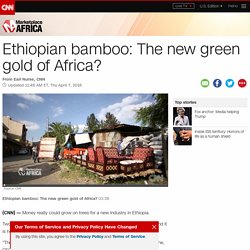 "The farmer who has bamboo is rich, but he doesn't know it," says Adane Berhe, CEO Adal Industrial PLC, which is helping to build the new industry. Berhe has travelled to China, the global hub of the bamboo trade, to acquire modern manufacturing equipment. This has allowed his business to scale up from producing toothpicks to flooring and curtains. China is also beginning to invest in Ethiopia.

The International Network for Bamboo and Rattan (INBAR) has now established an office in Addis-Ababa. "China has the technology, the capital, and the international market," says Fu Jinhe, East Africa Regional Coordinator for INBAR. Ethiopia: Milk Fortification, Powdered Milk Supply in Ethiopia. AnalysisBy Abebe H.l Asia will remain the main market for dairy products, accounting for some 55 percent of world imports, followed by Africa, with 15 percent. 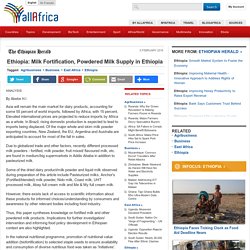 Elevated international prices are projected to reduce imports by Africa as a whole. In Brazil, rising domestic production is expected to lead to imports being displaced. Of the major whole and skim milk powder exporting countries, New Zealand, the EU, Argentina and Australia are anticipated to account for most of the fall in sales. Due to globalized trade and other factors, recently different processed milk powders - fortified, milk powder, fruit mixed/ flavoured milk, etc. are found in medium/big supermarkets in Addis Ababa in addition to pasteurized milk. Some of the dried dairy product/milk powder and liquid milk observed during preparation of this article include Pasteurized milks, Anchor's (Fortified/blended) milk powder, Nido milk, Coast milk, UHT processed milk, Abay full cream milk and Me & My full cream milk. 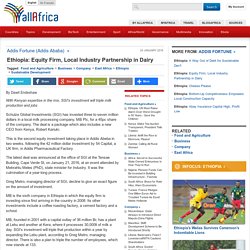 The deal is a package which also includes a new CEO from Kenya, Robert Kariuki. This is the second equity investment taking place in Addis Abeba in two weeks, following the 42 million dollar investment by 54 Capital, a UK firm, in Addis Pharmaceutical Factory. The latest deal was announced at the office of SGI at the Tensae Building, Cape Verde St, on January 21, 2016, at an event attended by Mebrahtu Meles (PhD), state minister for Industry. 'Modern day Mendel' Modernizing Sesame Seed Production - The Media Line. An accidental discovery may soon change the agricultural production of sesame seeds on a global scale. 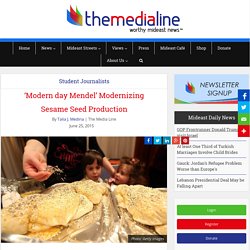 When Israeli scientist Zvi Peleg was in Ethiopia on a research trip in 2008, he stumbled upon a plant he had never seen before, and had to know more. “It is not a crop grown in Israel and we never saw it before,” Peleg told The Media Line. The fact that the sesame plant is not native to Israel is quite a surprise considering it’s a staple food here. It can be found on everything from hamburger buns to pizza crust and is the essential ingredient in traditional foods like tahini and the sweet halva dessert. “I saw the sesame plants and it looked very exciting,” Peleg continued.” Africa's Largest Gene Bank Helping to Bolster Biodiversity, Food Security: UNDP, GEF. Addis Ababa July 15/2015 UNDP Administrator Helen Clark and Global Environment Facilities (GEF) Chief Executive Officer, Naoko Ishii, today visited Africa's largest gene bank. 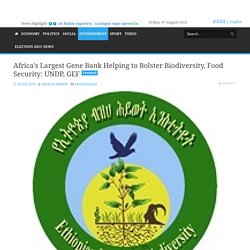 The gene bank is hosted by the Ethiopia Biodiversity Institute (EBI), and is among initiatives supported by UNDP and the GEF worldwide that exemplify how environmental finance can play a critical role in advancing sustainable development. ''We need to make smart decisions and leverage environmental finance to catalyze and deliver multiple economic, social and environmental benefits. Investing in the wellbeing of our planet and halting climate change should not be seen as a ‘cost’, but as a worthwhile investment, '' Helen Clark on the occasion said. “The needs for development will always outstrip the resources available, so we have to find the opportunities to catalyze change and snowball into impacts far in the future,” Dr Naoko Ishii said.

According to Gemedo, some 21 gene banks were established across the country. Ethiopia: Teff - Ethiopia's Tiny Secret Going Global. Photo: A. 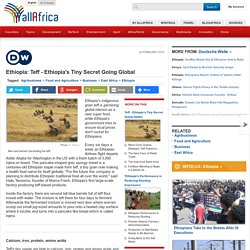 Davey Men and women harvesting the teff. Ethiopia's indigenous grain teff is garnering global interest as a new super food, while Ethiopia's government tries to ensure local prices don't rocket for Ethiopians. Every six days a week an Ethiopian Airlines flight departs Addis Ababa for Washington in the US with a fresh batch of 3,000 injera on board. This pancake-shaped grey spongy bread is a centuries-old Ethiopian staple made from teff, a tiny grain now making a health food name for itself globally.

Inside the factory there are several tall blue barrels full of teff flour mixed with water. Ethiopian farmers are getting 60% more of the value. Ermias Eshetu Chief executive, Ethiopia Commodity Exchange. 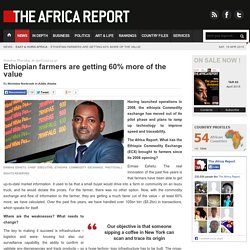 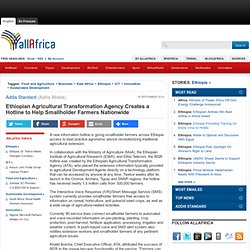 In collaboration with the Ministry of Agriculture (MoA), the Ethiopian Institute of Agricultural Research (EIAR), and Ethio Telecom, the 8028 hotline was created by the Ethiopian Agricultural Transformation Agency (ATA), who placed the extension information typically provided to agricultural Development Agents directly on a technology platform that can be accessed by anyone at any time. Irrigation projects in Ethiopia. Agro Investment in Ethiopia. Invest Here - Ethiopia @ AllComTV.com. Coverting Ethiopian Desert into Hyper-Productive Land. Ethiopias abundant farming investments leave many still hungry. Africa's First Commodity Exchange Revolutionized Ethiopia's Economy. Ethiopia Commodity Exchange AFRICANGLOBE – While government leaders, NGOs and corporations devise strategies to churn out more food for future generations, Eleni Gabre-Madhin is taking a different approach. Concerned by a 2002 famine in her home country of Ethiopia that followed bumper crops in 2000 and 2001, the Stanford-educated economist decided it was time to go beyond food production and take a hard look at distribution.

The result? Africa’s first commodity exchange. As the founder and outgoing CEO of the EEthiopia Commodity Exchange (CX), Gabre-Madhin established a reliable interface for buyers and sellers to meet – an idea that has inspired other African countries to follow suit. Ethiopia determined to repeat its floriculture business miracle with fruits and vegetables. Summit to introduce low hanging sector opportunities for local and foreign investors in Ethiopia.

In Ethiopia, a Saudi company leases land to grow and export rice. Gambella in western Ethiopia is one of the most fertile places in the mostly drought- and famine-stricken Eastern Africa country, with thick forests, scorching heat and abundant rains. But now Gambella, home to five rivers and a National Park, is also home to large-scale agricultural investments. A Saudi billionaire has leased 25,000 acres from the Ethiopian government to grow rice and this summer planted its first commercial crop. Saudi Star Offers Jobs to Overcome Criticism of Ethiopia Project. Saudi Star Agricultural Development Plc, owned by Saudi billionaire Mohamed al-Amoudi, said it plans to overcome local opposition to its Ethiopian rice project by offering jobs and training, a month after five people working on it were shot dead. Criticism by residents may subside when the 10,000-hectare (24,711-acre) plot is developed and 5,000 jobs are created on the farm in the southwestern Gambella region in about two years, Saudi Star Chief Executive Officer Fikru Desalegn said in an interview yesterday in Addis Ababa, Ethiopia’s capital.

Ethiopia is leasing 4 million hectares of land to foreign investors in regions including Gambella as part of a commercial- farming drive. Advocacy groups such as the U.S. -based Oakland Institute have said the program has resulted in rights violations and forced the relocation of more than a million people. The government says resettlement has been voluntary and unrelated to the investment program. 19 Killed Land Earmarked.

Yara is one of the leading suppliers of mineral fertiliser to Ethiopia and has several times during the past years won large contracts with the Ethiopian state.