Aquaculture in sub-Saharan Africa: small successes, bigger prospects? - Forbes Africa - Forbes Africa. If you don’t know what aquaculture is, you’re not alone: a 2009 survey found that a remarkable 85% of South Africans had never even heard the term, and most are still unaware of its importance. 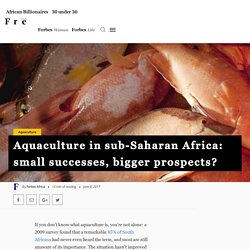 The situation hasn’t improved much, more people have heard of it but few actually know what it is. Aquaculture is the aquatic equivalent of agriculture. It involves essentially “growing” animals and plants that live in lakes, rivers or the sea, mostly for human consumption. It has been one of the world’s fastest growing industries in recent decades. In fact, today, you’re more likely to be eating “farmed” fish than fish from the wild. As the supply of fish and seafood through fishing becomes less sustainable, the global challenge is to replace it sustainably through aquaculture. 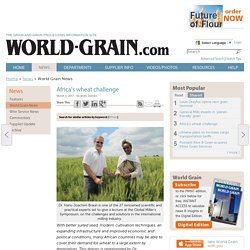 Hans-Joachim Braun is one of the 27 renowned scientific and practical experts set to give a lecture at the Global Miller’s Symposium, on the challenges and solutions in the international milling industry. With better suited seed, modern cultivation techniques, an expanding infrastructure and improved economic and political conditions, many African countries may be able to cover their demand for wheat to a large extent by themselves.

This theory is represented by Dr. Hans-Joachim Braun, Global Wheat Program Director at the International Maize and Wheat Improvement Centre (CIMMYT). AfDB To Invest $24bn In 10-year Agric Transformation Plan. The president of the African Development Bank (AfDB) Dr Akinwumi Adesina has said the bank through its Feed Africa Strategy, would invest $24 billion over the next 10 years to help drive the agricultural transformation of Africa. 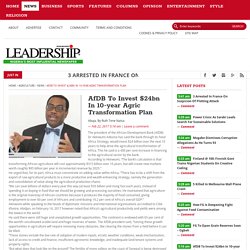 This he said is a 400 per cent increase in financing to the agricultural sector by the bank. According to Akinwumi, “The bank’s calculation is that transforming African agriculture will cost approximately $315 billion over 10 years, but will create new markets worth roughly $85 billion per year in incremental revenue by 2025.” He urged that, for its part, Africa must concentrate on adding value within Africa. “There has to be a shift from the export of raw agricultural products to a more productive and wealth-enhancing strategy, namely the generation and consolidation of value along the agricultural production chains. Africa’s First Postharvest Loss Reduction Innovation Conference and Competition – Food Tank.

Farmers, academics, entrepreneurs, and policymakers will gather at the Safari Park Hotel in Nairobi, Kenya, from March 28 to 31, 2017, for a conference on Reducing Postharvest Food Losses: Sustainable Solutions for Africa. 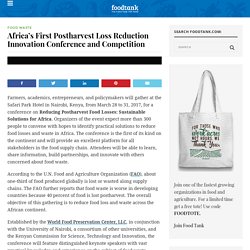 Organizers of the event expect more than 300 people to convene with hopes to identify practical solutions to reduce food losses and waste in Africa. The conference is the first of its kind on the continent and will provide an excellent platform for all stakeholders in the food supply chain. Attendees will be able to learn, share information, build partnerships, and innovate with others concerned about food waste. According to the U.N. AfricaRice publie son rapport annuel pour l'année 2015. Africa: A Pivotal Moment for Biofortification. Photo: Fabiola Ortiz/IPS Joane Nkuliye, a rural entrepreneur from Rwanda’s Eastern Province, grows biofortified beans on a commercial scale. 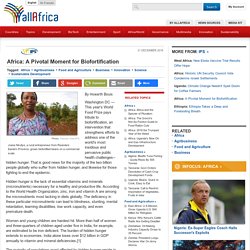 By Howarth Bouis Washington DC — This year's World Food Prize pays tribute to biofortification, an intervention that strengthens efforts to address one of the world's most insidious and pervasive public health challenges--hidden hunger. That is good news for the majority of the two billion people globally who suffer from hidden hunger, and likewise for those fighting to end the epidemic. Hidden hunger is the lack of essential vitamins and minerals (micronutrients) necessary for a healthy and productive life.

Can Mars' bid to publish genetic maps of historic African crops boost nutrition? A multi-million dollar research group co-founded by the confectionery company Mars is set to publish the genetic maps to five traditional African crops as part of an ambitious project that it says could help end malnutrition on the continent. 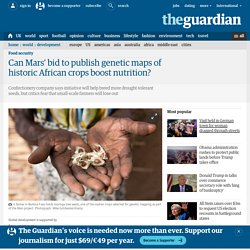 The project is applying modern biotechnology to African “orphan crops” – including finger millet and the “superfood” moringa – with the goal of breeding new versions that are more productive or more tolerant to drought or disease. It is one of several new initiatives to develop improved varieties of crops that have been grown by small-scale farmers for generations but long-overlooked by international researchers and industry focused on globally traded staples like wheat and maize. The researchers say they will publish the crops’ genome sequences online for anyone to download for free; they are also training hundreds of African plant breeders on how to use the data. But he stressed they are not a magic bullet. 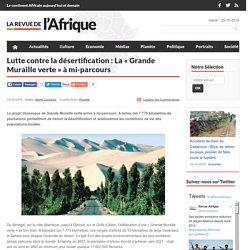 Eyes On 2025: African Union Launches Technical Networks For Agriculture. The experts from organisations implementing programs along the Comprehensive Africa Agriculture Development Programme (CAADP) were under one roof to launch their role-specific technical networks. 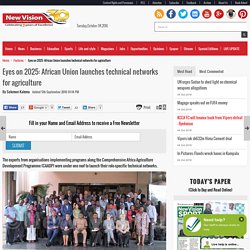 With the motivation of “less talk and more action” the African Union Department of Agriculture and Rural Economy convened a two-day launch sitting in Nairobi, Kenya on Friday and Saturday. These networks, according to Ernest Ruzindana, senior adviser to the commissioner of the Department, HE Rhoda Tumusiime are meant to ease the implementation of the CAADP. Africa urgently needs to be part of the microbial revolution sweeping through farming. Not too many years ago, global health advocates bemoaned the fact that it took decades for lifesaving vaccines to become widely accessible in poorer countries. 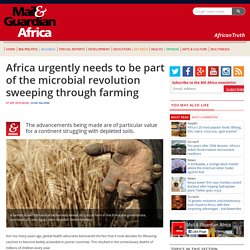 This resulted in the unnecessary deaths of millions of children every year. Today, childhood vaccines are available nearly everywhere as a result of global partnerships between governments, industry and philanthropists. The same is not true of agricultural technologies, which can also be lifesaving. In poor countries, low agricultural productivity and soil degradation are factors driving chronic hunger and malnutrition, and associated sickness and premature death. Indeed, malnutrition contributes to almost half of all child deaths. Kenya : Commodity exchanges bring new hope to Africa’s farmers - The Standard. At the recent African Green Revolution Forum in Nairobi, one of the outstanding take-outs was that Africa may need $400 billion (Sh40 trillion) in investment in food production over the next decade to meet its needs. 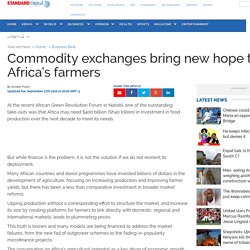 But while finance is the problem, it is not the solution if we do not reorient its deployment. Many African countries and donor programmes have invested billions of dollars in the development of agriculture, focusing on increasing production and improving farmer yields, but there has been a less than comparative investment in broader market reforms. Upping production without a corresponding effort to structure the market, and increase its size by creating platforms for farmers to link directly with domestic, regional and international markets, leads to plummeting prices. This truth is known and many models are being financed to address the market failures, from the new fad of outgrower schemes to the fading-in-popularity microfinance projects. Africa: Irrigation On Rise As Farmers Face Erratic Weather. By Justus Wanzala Interest in irrigation is surging but better women's land rights, access to clean energy, loans and training are needed. Sub-Saharan Africa is seeing a surge of interest in irrigation among small-scale farmers as climate change brings more erratic weather and as rising populations in countries from Nigeria to Kenya mean demand for a reliable harvest is growing, agriculture and water experts say.

The African Fertilizer and Agribusiness Partnership (AFAP) AGRA Plans to Invest $500 Million in African Seed Companies. TAGS: Marketing, Overseas December 18, 2014 Alliance for a Green Revolution in Africa plans to invest $500 million over five years to help agricultural companies and governments on the continent produce seeds. Africa may need $400bn to boost agriculture. Nairobi - Africa may need as much as $400 billion of investment in food production over the next decade to meet the continent’s needs, a report showed. “It could require $315 billion to $400 billion over the next 10 years in public and private sector investments in all aspects of food production, processing, marketing and transport,” the Alliance for a Green Revolution in Africa said in an emailed report on Tuesday.

Farmers also need buyers for a crop before they plant it. The market value of many of the region’s indigenous fruits, though, pales in comparison with popular crops such as mangoes and apples. Hope for a solution to both of those hurdles has come from an unlikely place—global food giant Unilever, whose executives stumbled across the oil-rich seeds of the tropical Allanblackia tree. For Unilever, part of the beauty of Allanblackia oil is its structural properties. Ultimately—and perhaps most important—the partnership could become a model for preserving other neglected indigenous crops across Africa and perhaps the globe. Africa: New Era Beckons With Implementation of Illegal Fishing Treaty. Rome — FAO chief hails Port State Measures Agreement, urges rapid action to provide technical and financial resources The Port State Measures Agreement "marks the dawn of a new era in the effort to combat illegal fishing" but rapid action is needed to make sure its implementation is effective, FAO Director-General José Graziano da Silva said today at an event held to celebrate the world's first international treaty specifically aimed at tackling Illegal, Unreported and Unregulated (IUU) fishing.

Yusuf Ibrahim, a tomato farmer in Kano, Nigeria, has lost almost 90 percent of his crop this year to Tuta absoluta. That prices for the fruit are 15 times higher than before the outbreak of the pest is little consolation; he can't afford to plant the corn and rice he normally does after harvesting tomatoes. Since arriving from South America via Spain in 2008, Tuta absoluta, also known as the tomato-leaf miner, has spread across at least 15 African countries.