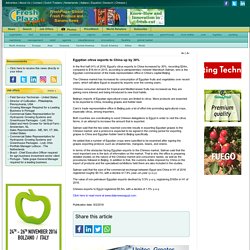 The Chinese market has increased its consumption of Egyptian fruits and vegetables over recent years, which will allow Egypt to expand its exports over the coming years. Chinese consumer demand for tropical and Mediterranean fruits has increased as they are gaining more interest and being introduced to new food habits. Beijing’s imports of Egyptian agricultural crops are limited to citrus. More products are expected to be exported to China, including grapes and fodder beet. Cairo’s trade representative office in Beijing puts a lot of effort into promoting agricultural crops, especially citrus, among importers. Publication date: 9/2/2016. Farming the Sahara. CAIRO—El Obour market, on the northeastern fringe of this megacity of 20 million, is the souk that never sleeps. 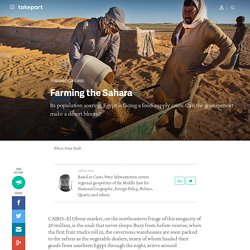 Busy from before sunrise, when the first fruit trucks roll in, the cavernous warehouses are soon packed to the rafters as the vegetable dealers, many of whom hauled their goods from southern Egypt through the night, arrive around midmorning. As wholesalers and restaurateurs from across Cairo descend en masse on the vast concourse to buy their provisions, the entire area echoes to the cries of vendors hawking their wares. “Eggplants here. Fresh from Sharqiya,” one stallholder shouts, barely stifling a yawn after making a predawn trek from the Nile Delta’s eastern edge. “Mangoes, mangoes, mangoes,” a competing businessman barks, seeking to lure in a pool of passing potential customers. 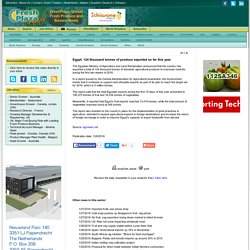 In a report issued by the Central Administration for Agricultural Quarantine, the Government insists that it continues to support and stimulate exports as part of its plan to reach the target set for 2016, which is 5 million tonnes. Farming the Sahara. CAIRO—El Obour market, on the northeastern fringe of this megacity of 20 million, is the souk that never sleeps. 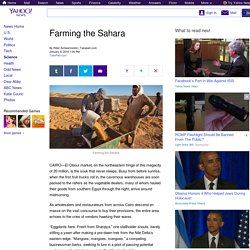 Busy from before sunrise, when the first fruit trucks roll in, the cavernous warehouses are soon packed to the rafters as the vegetable dealers, many of whom hauled their goods from southern Egypt through the night, arrive around midmorning. As wholesalers and restaurateurs from across Cairo descend en masse on the vast concourse to buy their provisions, the entire area echoes to the cries of vendors hawking their wares. “Eggplants here. Fresh from Sharqiya,” one stallholder shouts, barely stifling a yawn after making a pre-dawn trek from the Nile Delta’s eastern edge. 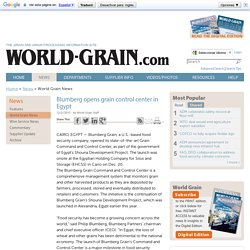 -based food security company, opened its state-of-the-art Grain Command and Control Center, as part of the government of Egypt's Shouna Development Project. The launch was onsite at the Egyptian Holding Company for Silos and Storage (EHCSS) in Cairo on Dec. 20. The Blumberg Grain Command and Control Center is a comprehensive management system that monitors grain and other harvested products as they are deposited by farmers, processed, stored and eventually distributed to retailers and customers.

Egypt: Beans and Koshary Save Egyptians From Rising Food Prices in 2015. By Mohamed Gad and Yasmine Selim The price of over a third of food items in Egypt have doubled over the past year but dried beans, lentils, rice and macaroni, which often make up the diet of disadvantaged Egyptians, have remained stable. 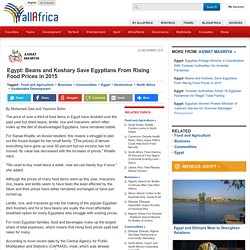 For Sanaa Khalifa, an Assiut resident, this means a struggle to plan out the house budget for her small family. "[The prices] of almost everything have gone up over 50 percent but our income has not moved. Its value has decreased with the increase of prices," Khalifa says. "We used to buy meat twice a week, now we can barely buy it once," she added. Although the prices of many food items went up this year, macaroni, rice, beans and lentils seem to have been the least affected by the hikes and their prices have either remained unchanged or have just inched up. For most Egyptian families, food and beverages make up the largest share of total expenses, which means that rising food prices spell bad news for many. Egypt bans rice exports as of Sept. 1. Reuters , Thursday 27 Aug 2015 Farmers harvest rice (Photo: Reuters ) Egypt will ban rice exports again as of Sept. 1. to satisfy domestic consumption, the ministry of trade and industry said on Thursday. 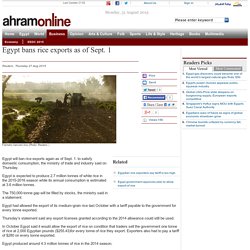 Egypt is expected to produce 2.7 million tonnes of white rice in the 2015-2016 season while its annual consumption is estimated at 3.6 million tonnes. Food Security: Egypt Plans To Raise Crops In Sub-Saharan Africa. By Walaa Hussein | From Al Monitor {*style:<i>*}Amid Egypt’s {*style:<a href=' scarcity{*style:</a>*}, which threatens to worsen the country’s food shortage, Cairo is working to form {*style:<a href=' alliances{*style:</a>*} outside its borders. 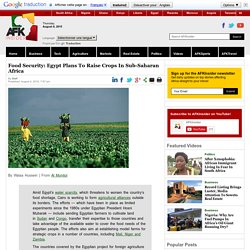 The efforts — which have been in place as limited experiments since the 1980s under Egyptian President Hosni Mubarak — include sending Egyptian farmers to cultivate land in {*style:<a href=' and {*style:<a href=' transfer their expertise to those countries and take advantage of the available water to cover the food needs of the Egyptian people. The efforts also aim at establishing model farms for strategic crops in a number of countries, including {*style:<a href=' Niger and Zambia{*style:</a>*}. {*style:<br>*}The countries covered by the Egyptian project for foreign agriculture have an abundance and diversity of water sources, but declining agricultural development due to lack of funding and agricultural machinery. Ministry: Egypt accounts for 16.6% of world date production.

Egypt suspends cotton import to promote local production. Copyright : APA The Egyptian government has suspended the importation of cotton to encourage the production and marketing of local harvest, the Ministry of Agriculture announced Tuesday in a statement. 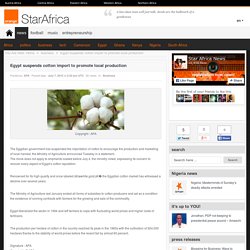 The move does not apply to shipments loaded before July 4, the ministry noted, expressing its concern to recover every aspect of Egypt’s cotton reputation. Renowned for its high quality and once labeled â€œwhite gold,â€ the Egyptian cotton market has witnessed a decline over several years. Egypt: +2 million tonnes of ag products exported by Ismailia. Egyptian fish farmers learn best aquaculture practices. Egypt launches food security network.

12/5/2014 - by World Grain Staff CAIRO, EGYPT — Blumberg Grain, in partnership with the Egyptian Ministry of Supply and Internal Trade and the Army Engineering Authority, announced on Dec. 5 that it is developing one of the world's largest and most sophisticated integrated food security systems for grain storage. 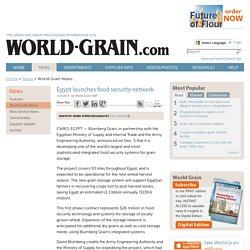 The project covers 93 sites throughout Egypt, and is expected to be operational for the next wheat harvest season. The new grain storage system will support Egyptian farmers in recovering crops lost to post harvest losses, saving Egypt an estimated LE 1 billion annually ($139.6 million). This first phase contract represents $28 million in food security technology and systems for storage of locally grown wheat. Expansion of the storage network is anticipated for additional dry grains as well as cold storage needs, using Blumberg Grain's integrated systems.

26 Firms agreed to invest in Egypt's Agriculture Sector – Minister. Egypt's Ministry of Agriculture has signed protocols on cooperation with 26 local and international firms to invest in total area of 671.500 feddans, minister Salah Helal stated. As pursuant to the protocol, 16 Egyptian firms shall invest in 201.5 thousand feddans; while 10 Arab and foreign firms will invest in 470 thousand feddans, said Salah Helal -the Minister- on Tuesday. Investing-in-storage. Khaled Hanafi, minister of supply and internal trade, signed two deals, with the Emirati Al-Suwaidan Group and the China Harbour Engineering Group, on Saturday. The companies will build a logistics centre for the storage and handling of grains and cereals in Damietta on the Mediterranean coast. The project was first proposed last year as part of plans to provide food security for Egypt’s 90 million people. Egypt is the largest wheat importer in the world. The Damietta project includes construction of high-tech storage silos for grains, and will increase Egypt’s storage capacity from its current 2.5 million tons to 7.5 million tons.

The hub will also provide logistical support and added-value activities such as packaging and processing of oil seeds, raw sugar and unrefined oils with an annual capacity of 65 million tons. Egypt- Field irrigation project to provide 7%-10% increase in cultivated land: Beltagy. (MENAFN - Daily News Egypt) implementation of a field irrigation project will provide a 7%-10% increase to Egypt's cultivated land, according to Minister of Agriculture Adel El-Beltagy.

The project has been prepared by the Ministry of Agriculture to irrigate 5m acres and reclaim 1m acres as part of a national project for land reclamation. Egypt and Blumberg Grain Launch World’s Largest Integrated Food Storage System — BlackSeaGrain. In the coming months, Egypt and the American company Blumberg Grain will create the world’s largest integrated food storage system for grain, constructing 93 sophisticated wheat storage facilities across Egypt that will process 3.7 million tons annually and store 750,000 tons of wheat.

The food storage system will launch this April, and is expected to save Egypt approximately $200 million annually, in addition to creating jobs within Egypt’s agricultural center. Egypt is the world’s largest importer of wheat, as well as Africa’s largest wheat producer. Egypt initiates plan to ensure food security. An employee works next to hay coming out of a threshing machine during a harvest of wheat crop in the Nile Delta province of Al-Baheira, northwest of Cairo, May 22, 2014. (photo by REUTERS/Asmaa Waguih) Author: Ayah Aman Posted October 16, 2014 CAIRO — Despite Egypt’s limited water resources, the Egyptian government is confident and decisive about cultivating 4 million undeveloped acres for agricultural use outside the Nile Valley and the Delta line.

This new plan for farmland is not without difficulties, chief among which is the water shortage and the lack of adequate money for the reclamation of desert lands. Summary⎙ Print Egypt plans to cultivate 4 million acres of strategic crops for its large population, but water scarcity and a lack of funds raise doubts about its feasibility. Author Ayah Aman Posted October 16, 2014 TranslatorSami-Joe Abboud. Schaduf - An Agricultural Revolution in Cairo. The term 'concrete jungle' is never more aptly used than for Cairo.

Agribusiness overview: Egypt’s agriculture is poised for growth. By T.K. Egypt buys 2.5 million tons of local wheat. Egypt food subsidy bill to total $4.3bn this year. Egypt's food subsidy bill will be 30 billion Egyptian pounds ($4.31 billion) this year, an amount that is expected to remain stable in the next fiscal year that begins in July, the new supplies minister said, pledging to tackle a smuggling "mafia". Khaled Hanafi was appointed last month after his predecessor sacked top officials at the state-owned silos and storage holding company and at the main wheat importing body amid allegations of corruption. Egypt Wants To Invest In Dessert Farming. Morsi: No more wheat imports within four years. President Mohamed Morsi made the announcement about achieving self sufficiency in wheat production within four years during a visit to a wheat farm near Alexandria (Photo Presidency handout) Egypt will stop all wheat imports within the next four years, depending only on domestic production, President Mohamed Morsi said in a speech last Wednesday delivered from a wheat field near Alexandria.