Literacy in the Digital Age 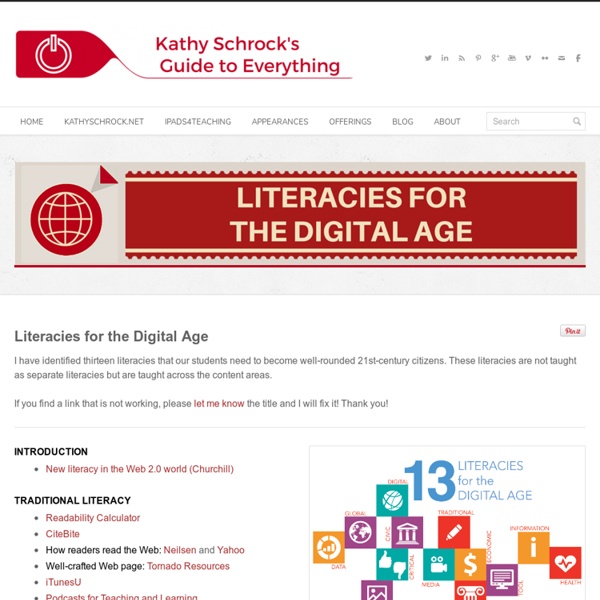 4 Principals Of Digital Literacy Literacy Literacy is the ability to make sense of something, often generalized as the ability to read and write. In many ways, reading is reading, media is media, but in the same way a play places unique comprehension demands on a reader compared to a poem or a letter, so do digital media compared to classic media forms. Jason Ohler : Education and Technology Part II. Emergence of new media literacies Every day media create every day literacy and fluency needs Students need to be able to write new media, and teachers need to be able to assess it. Until recently, every day media forms were text-based. No longer.

The Four Things Students Need to Create Good Book Trailers Creating book trailer videos is a great alternative to a traditional written book report assignment. In a book trailer video students highlight their favorite elements of a story and try to entice viewers to read the book themselves. Much like a movie trailer that tries to get viewers to watch the full movie, a book trailer should give viewers just enough to be interested in the full story without giving away the conclusion to the story. If you have heard of book trailers and wanted to try having your create book trailers, here are the four things they'll need to get started after reading a book.

Are Your Students Digitally Literate? 10 Resources Included in the Digital Tips Advent Calendar and part of the Effective Technology Integration category A computer does not substitute for judgment any more than a pencil substitutes for literacy. ~ Robert S McNamara Our learners live in a connected world where technology impacts their lives daily. Our students often dedicate many hours to communicating, sharing, and learning online. However fabulous Creative Commons and Public Domain content may be, sometimes you really need to use copyrighted material. Say you plan to comment on popular media or current events. For instance, you may be planning to critique the portrayal of Native Americans in commercial films. You are going to want to “quote” some commercial films like Pocahontas, Lone Ranger, and Dances with Wolves.

Learning Twigs The idea of disintermediation ("cutting out the middle man") in terms of professional qualifications has been slowly but surely gathering steam in a variety of fields. Take a look at a range of Position Descriptions for new jobs these days and phrases along the lines of Tertiary qualifications in a relevant discipline, or equivalent experience and expertise/skills are becoming more frequent. Private companies (as we might expect) have been quicker to apply this in practice rather than rhetoric compared to educational institutions, mired as most of them are in conservative paper-reliant processes for verifying applicants' skills, but even here we are starting to see change. As university qualifications become more expensive and fail to deliver effective ROI for the people who invest their time and money in them, the idea of cutting them out of the picture partly or wholly is becoming not only more attractive, but more feasible. Branding is still important, however.

Now with Video Clips! Meet the New Adobe Spark Video Now with Video Clips! Meet the New Adobe Spark Video Aubrey Cattell | Let’s face it—video was everywhere in 2016. It used to be a cause, a business, a brand was invisible if it didn’t have a website. 14 brilliant quotes on remixing Art cannot be created or destroyed — only remixed. In a convincing talk from TEDGlobal 2012, director Kirby Ferguson explores the challenges of originality and freshness in a world where creativity takes root in what has come before. Without previous inventions we would not have the iPhone, the Model T Ford, Star Wars, Warhol’s soup cans, or the electronic musician Girl Talk. Ferguson highlights that remixing, referencing and reproducing previous innovations allows artists to engage in a cultural dialogue and allows art, technology and society to continue evolving.

Exactly Where Did the Selfie Stick Come From? Oxford Dictionaries made “selfie” the word of the year in 2013. U.S. consumers responded by making the selfie stick the gift of the year in 2014. Around the U.S. this holiday season, camera shops, department stores and pharmacies have been having a hard time keeping up with demand for the selfie stick, a retractable pole that people clamp onto their smartphones to take better pictures of themselves. Nordstrom Inc. (JWN), which carried the Selfie On A Stick model in 118 stores starting in late November, said it had to reorder the item twice before Christmas and is currently sold out. ProMaster, which supplies camera accessories to 500 U.S. stores, said it had to keep re-ordering selfie sticks after running out of stock. 6 Ed Tech Tools to Try in 2015 While doing research for my upcoming e-book, The Teacher’s Guide to Tech, I have come across dozens of tools with pretty awesome potential for teaching and learning. These six are the ones I think are the most interesting and most useful right now. Wherever you fall on the technology spectrum — from newbie to experienced user — there’s probably something here you haven’t tried yet. Although most of these tools aren’t brand-new, they are all steadily growing in popularity, and each one can enhance teaching and learning in a unique, time-saving, or engaging way.

m.facebook Back in 2015, when we published our lesson plan Fake News vs. Real News: Determining the Reliability of Sources, we had no way of knowing that, a year later, the Oxford Dictionaries would declare “post-truth” the 2016 word of the year; that fake news would play a role in the 2016 presidential election; that it would cause real violence; and that the president-elect of the United States would use the term to condemn mainstream media outlets he opposes. Back then, to convince teachers that the skill was important, we quoted Peter Adams of the News Literacy Project on the “digital naïveté” of the “digital natives” we teach.

Teaching Adolescents How to Evaluate the Quality of Online Information An essential part of online research is the ability to critically evaluate information. This includes the ability to assess its level of accuracy, reliability, and bias. In 2012, my colleagues and I assessed 770 seventh graders in two states to study these areas, and the results definitely got our attention. Unfortunately, over 70 percent of the students’ responses suggested that: Middle school students are more concerned with content relevance than with credibility They rarely attend to source features such as author, venue, or publication type to evaluate reliability and author perspective When they do refer to source features in their explanations, their judgments are often vague, superficial, and lacking in reasoned justification Other studies highlight similar shortcomings of high school and college students in these areas (see, for example, a 2016 study from Stanford).

Fake It To Make It I'm so glad you asked! There are a number of good articles on how to identify fake news, including this one from FactCheck.org: How to Spot Fake News. In addition, please: Do your research before sharing! If you see something questionable, look it up! Sometimes, just a quick Google search is enough.