The 8 Characteristics Of A 21st Century Teacher 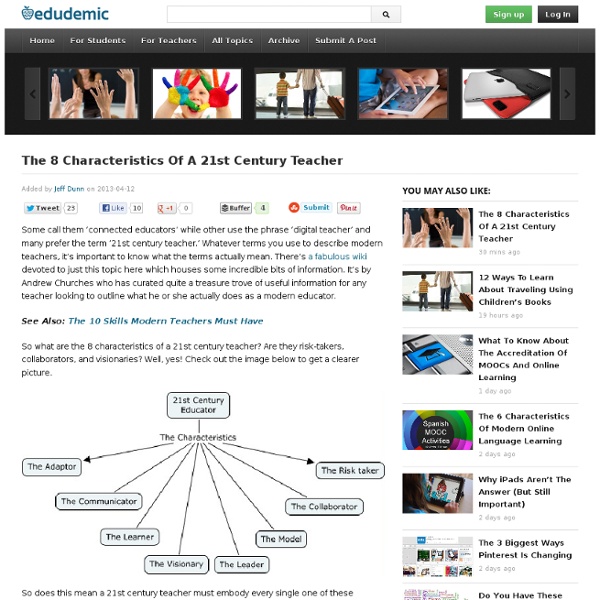 Some call them ‘connected educators’ while other use the phrase ‘digital teacher’ and many prefer the term ’21st century teacher.’ Whatever terms you use to describe modern teachers, it’s important to know what the terms actually mean. There’s a fabulous wiki devoted to just this topic here which houses some incredible bits of information. It’s by Andrew Churches who has curated quite a treasure trove of useful information for any teacher looking to outline what he or she actually does as a modern educator. See Also: The 10 Skills Modern Teachers Must Have So what are the 8 characteristics of a 21st century teacher? So does this mean a 21st century teacher must embody every single one of these characteristics in order to be considered for the lofty and esteemed title? Man, that’d be exhausting. What you do need to do, though, is be able to pull from experience and be a leader, a collaborator, a communicator at a moment’s notice. What other characteristics would you name?

10 Ways To Be More Creative 27 Ways To Be A 21st Century Teacher 16.89K Views 0 Likes So what does it take to become a 21st century teacher? This handy chart details more than two dozen ways to get started. A must-read and share. How To Use Mood Boards For Visual Learning 10.74K Views 0 Likes Mood boards are used for photography, game design, interior design, marketing, fashion, music, advertising and even architecture; but who’s to say they shouldn’t be used in the classroom?

Explainer: What is a 'Gonski' anyway? This week you might have heard the word “Gonski” even more than usual. That’s because the Gillard government finally announced how it would pay for its school funding reform in the lead up to its meeting with the states – who it needs to help fund the changes. Yesterday the states failed to sign up to the reforms but what does that really mean? In order to understand the significance of the reforms, based on the landmark Gonski review on school funding, you need to understand how the current system works, what’s wrong with it and what proposals there are to fix it. The current system Australia’s school funding arrangements are unnecessarily complex, opaque, ineffective and inequitable. It’s actually dozens of systems, public and private, state and commonwealth. Under the Australian Constitution, schooling is a residual responsibility of the states (that means it isn’t listed as a Commonwealth power under section 51). Click to enlarge Funding and disadvantage What Gonski recommended

12 Ways To Learn About Traveling Using Children's Books 27 Ways To Be A 21st Century Teacher 16.23K Views 0 Likes So what does it take to become a 21st century teacher? The 22 Milestones Of Education Technology 12.07K Views 0 Likes Just look how far we've come over the past few hundred years. How To Use Mood Boards For Visual Learning 10.64K Views 0 Likes Mood boards are used for photography, game design, interior design, marketing, fashion, music, advertising and even architecture; but who’s to say they shouldn’t be used in the classroom?

The 10 Skills Modern Teachers Must Have The above image is 8.5×11″ so you can print it out. PDF is available here . There’s been a lot of talk about 21st century learners, 21st century teachers, and connected classrooms. There’s a daily influx of new technology into your inbox and your classroom feels woefully behind the times even if you’re flipping your 1:1 iPad classroom that’s already online and part of a MOOC . Simple. In my experience, I’ve seen teachers attempt to integrate 30 iPads into their classroom by handing them out and then trying to figure out which apps are worth using. In order to do this, you’ll need skills modern teachers must have. 1) Build Your PLN Whether you call it a ‘personal learning network’ or a ‘professional learning network’ is not important. 2) Establish Real Relationships Whether it’s online or offline, the ability to establish real relationships is critical to any modern teacher. 3) Understand Where Technology Fits In Education 4) Know How To Find Useful Resources 5) Manage Your Online Reputation

10 Ways To Use Offline iPads In Education Just about every article on using iPads in education involves one key feature: connectivity. Whether it’s wi-fi or cellular service, being connected to the web is by far the most important feature for iPads in the classroom. Otherwise, it’s just what the tech-bloggers call a ‘brick’ and is essentially worthless. Right? Not really. As you probably guessed from the title of this post and the visual I spent way too much time making below, there are plenty of ways to use iPads that have little to no connectivity. See Also: 17 Real-World Ways iPads Are Being Used In Schools Note: since you need to be connected to the web in order to set up your iPad, I’m going to assume you were connected at one point and that you have the ability to download an app that can be used later. How do you prefer to use your iPad when there’s no connection to the web? Click the image below for full-size or click here to download it as a PDF Use Google Earth in offline mode to go on virtual field trips.

How to Fill a Library With People Instead of Books A new study by researchers in Queensland, Australia, examines the role of libraries as hotbeds for collaboration, and why people engage — and don’t engage — in the commingling of ideas and experiences these environments are designed to foster. The paper, titled "Library as Co-Working Spaces: Understanding User Motivations and Perceived Barriers to Social Learning," appears in the latest issue of the journal Library Hi Tech. Marcus Foth and Mark Bilandzic spent five months conducting field research at The Edge, a "‘bookless’ library space" in Brisbane. A project of the State Library of Queensland, The Edge is, the authors write, "explicitly dedicated to co-working, social learning, peer collaboration, and creativity around digital culture and technology." Foth, director of the Urban Informatics Research Lab at Queensland University of Technology, and Bilandzic, a researcher at the school, compiled an ethnographic take on how people actually use the space, day in and day out.

How Online Learning Is Like Babysitting Taking part in an online course – whether as a student or teacher – is like suddenly being asked to take care of someone else’s three-year old. A very rambunctious three-year-old. And even though it may have seemed easy enough when you agreed, it demands far more attention that you could ever have imagined. All day long, as you attempt to carry on with the rest of your life it interrupts what you are doing and tosses toys at you and needs to be fed. The Online Teacher’s Perspective You took the “babysitting” test for online learning/teaching and easily passed: Yes I am self-motivated, Yes I like to communicate in written form, Yes I can organize my schedule, Yes I can meet deadlines. You knew you’d need to allow “space” in your schedule – but how can anyone allow this much space in their schedule? Abandon The Rest Of Your Life You must give in and give yourself over to this demanding three-year-old. The Realization Slowly, you realize it’s worth it. Hold on to your binkie. Welcome.

21st Century Classroom Design « Process of Living 21st Century Classroom Design The 21st Century classroom is designed with two key concepts in mind: technology access and student-centered architecture. To the end of providing greater access to technology, the classroom is outfitted with a mounted LCD projector, a document camera and an additional wireless router. The school is also in the process of installing power outlets around the room so that students can charge their personal computing devices during class. In order to create a student-centered environment, the teacher’s desk has been removed and replaced with a podium that can be moved around the room. This is a strategy known as “decentralizing the classroom” and the goals is to remove the traditional teacher’s desk (situated as the center of the class’s attention, much like a television in living room) to allow students to take over in a polycentric layout. Flipped-Learning, Project Based Learning (PBL) and the Teacher as Coach Teamworking and Management Educational Mileage