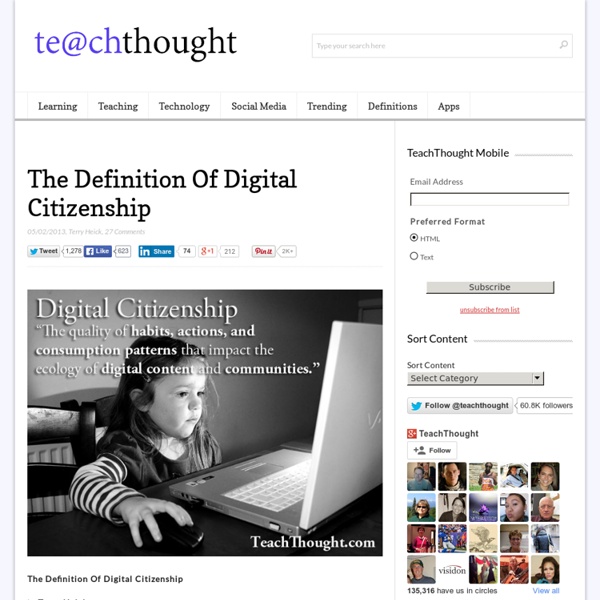 The Definition Of Digital Citizenship by Terry Heick As more and more students interact digitally–with content, one another, and various communities–the concept of digital citizenship becomes increasingly important. Which begs the question: what is digital citizenship? Well, first citizenship, which is formally defined as “the quality of an individual’s response to membership in a community.” This makes citizenship far more complex than a simple legal matter, but rather one that consists of self-knowledge, interaction, and intimate knowledge of a place, its people, and its cultural history. So digital citizenship is nearly the same thing–“the quality of a response to membership in a digital community” would be a good first crack at the definition. But that leaves out the idea of content itself, which leads us to a pretty good definition for educators: “The quality of habits, actions, and consumption patterns that impact the ecology of digital content and communities.” Still too wordy?

Excellent Tool to Teach Students about Digital Citizenship and Digital Literacy ~ Educational Technology and Mobile Learning April 22, 2015 Digital Compass is a new tool released by Common Sense Media to help kids learn the fundamentals of digital citizenship and digital literacy through playing interactive games designed specifically for grades 6-9. The games came in the form of a simulation of the digital world we live in and provides kids with an informed understanding of the implications involved in creating digital identities. Digital Compass is available as a web-based tool to be played online, the iOS and Android app is expected to be released soon. The game starts with a short introductory video about the game after which kids are prompted to select a character and dive in with it in its digital world. Watch this video to learn more about Digital Compass Thanks to Tom D'Amico and Shannon Miller through whom we learned about this resource.

Parents Want Kids to Use Mobile Devices in Schools Digital Tools Teaching Strategies Flickr: jhaymesisvip Smartphones, tablets, and other mobile devices have gained popularity as educational tools in part because of the belief those devices could cut across the digital divide created by socioeconomic boundaries. Now a new study reinforces that perspective, finding that students’ access to mobile devices, in this country anyway, is more often a question of parents’ attitudes toward mobile learning than a family’s income or the mobile device provisions of that family’s local school district. The report published by Grunwald Associates and the Learning First Alliance with support from AT&T, found that, according to data from a representative nationwide sample of nearly 2,400 parents, more than four in five K-12 students at least occasionally use some sort of computing device, including mobile devices like tablets or smartphones, or laptop computers. Income did affect the number of computing devices per household, however. More from the study:

flipped classroom An excellent tool for your flipped classroom is EDpuzzle. With this tool you can crop a video to only use the portion you need for your specific class. Another feature is you can add your own voice by inserting audio notes or recording over the video. The embed quiz feature allows you to add questions at random points in the video to engage students and check their understanding of the material. With EDpuzzle you can locate video from a number of sources including Youtube, Teacher Tube, Khan Academy, TED and LearnZillion. Once complete you can upload your completed video to the EDpuzzle library. Click here to visit the site. INTRODUCING EDpuzzle Edpuzzle Demo Playlist My First Edpuzzle Video I have uploaded both my edited video and the original for you to see the difference between the two and get an idea of the options available to edit your video with EDpuzzle. Below is the original video from My Smart Hands.

50 Questions To Promote Metacognition In Students 50 Questions To Help Students Think About What They Think by Lisa Chesser Using the right questions creates powerful, sometimes multiple answers and discussions. Aristotle said that he asked questions in response to other people’s views, while Socrates focused on disciplined questioning to get to the truth of the matter. Ultimately questions spark imagination, conjure emotions, and create more questions. If students are the ones gathering that information then they’re the ones learning it and student-driven learning cements lessons into the students’ mind making any lesson more powerful with this strategy. The questions are unrestricted and open the mind up to unfettered thought, perfect for innovation and understanding. Logical Questions Within the realm of mathematics, there are certain types of questions that build up to those aha moments or topple barriers. The addition of philosophical questioning to mathematics enhances critical thinking in every learner. Reflection & Collaboration

When To Put The Tech Away In Your 1:1 (or Any) Classroom The following post is written by EdTechTeacher’s Shawn McCusker and Beth Holland. They will also be leading EdTechTeacher Summer Workshops in Atlanta , Chicago , and Boston . When we work with schools embarking on 1:1 programs, losing classroom culture often tops the list of concerns. Turning OFF an Elementary Classroom “1-2-3 look at me!” We’d had enough technology, and now it was time to re-engage as a class. Over the years, I established different routines with different groups of students. In an elementary classroom, children bouncing out of their chairs, loud screeching noises, and then occasional slew of waving hands amongst shouts of “it isn’t working” make it obvious to put away the technology. When and Why to Add Technology Though failing to include any technology in the modern classroom is wrong, including too much, or employing it ineffectively, can be equally problematic. At its best, technology enhances, extends or deepens the learning taking place.