*****Cash crops: How is Kenya reducing the carbon emissions from its exports of flowers? Have you ever thought about where your flowers come from? Four in 10 roses in the UK are flown from Kenya. □□ Sky News. UK shops - origin of goods. Quality control. Airbus. Chocolate production. Device manufacture e.g. mobile phones. Mini and BMW. Ice cream cone manufacture. Coffee production. These are the world’s most traded goods #trade… Primark. @missgeog92 Check out @followthethings / Think about what's in classrooms e.g. school furniture; IT equipment > Where were these things made? (opportun…

Sorry people but ... Haribo gummy bear ingredients are made using slave labour. Colman's Mustard could cut ties with Norwich as Unilever mulls closure. *****Was your T-shirt made in North Korea?

Fast fashion: Rivers turning blue and 500,000 tonnes in landfill. Updated In parts of China and India, farmers are predicting the colour of the next fashion season by the colour of their rivers due to run-off from the textile industry. 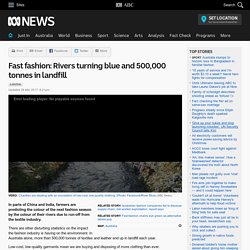 There are other disturbing statistics on the impact the fashion industry is having on the environment. In Australia alone, more than 500,000 tonnes of textiles and leather end up in landfill each year. Low-cost, low-quality garments mean we are buying and disposing of more clothing than ever. Roy Morgan Research has found 1.7 million Australians are buying at least one pair of jeans in any four-week period. 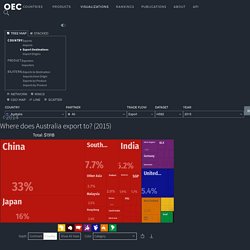 *****Traces of labour: Who Made My Phone? *****Began manufacturing insulated cables in the 1880s at Erith, #Kent. Little did it know in #1941 they would manufacture cables for #PLUTO. *****Export of carbon emissions: Doing Our Dirty Work. “The United States will be required to more steeply reduce our carbon emissions while China won’t have to reduce anything,” climate change-denying Senator James Inhofe said of last week’s historic U.S. 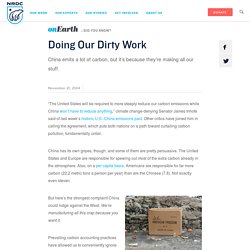 -China emissions pact. Other critics have joined him in calling the agreement, which puts both nations on a path toward curtailing carbon pollution, fundamentally unfair. China has its own gripes, though, and some of them are pretty persuasive. The United States and Europe are responsible for spewing out most of the extra carbon already in the atmosphere. Also, on a per capita basis, Americans are responsible for far more carbon (22.2 metric tons a person per year) than are the Chinese (7.8). *****'Grown not flown' Florists and farmers call on patriotic shoppers to buy British blooms. When you’re searching for the perfect bunch of flowers at your local supermarket or florist, how many of those blooms do you think are grown in Britain? 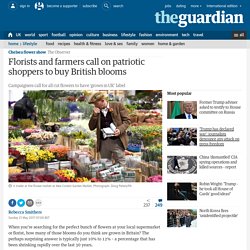 What Does Each Country Export the Most to the United… #CentralAmerica #Economics #NorthAmerica #SouthAmerica #USA. *****What Does Each Country Import the Most From the United States. 4 years on from #RanaPlaza... what's changed? #FashionRevolution Founder @Carrysomers speaks to @BBCWorld @bbcaaron.... *****Which share of #USA imports by category come from #China? World trade flows of cocoa beans (yellow) vs. chocolate (red) #dataviz #GVCs data. 10 April 1633. Bananas went on display in Thomas Johnson's shop in London. It was the first time the fruit was seen in Britain. *****Charging Up: Lifecycle of a Battery (Story Map)

Once Panasonic, Samsung SDI, LG Chem, ATL, and other companies have manufactured lithium-ion batteries, they ship them to electronics assembly plants where they are inserted into consumer products. 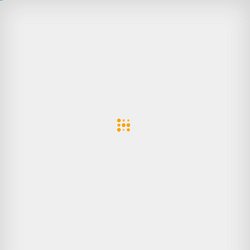 Some of the major companies producing lithium-ion-powered products include Apple, LG, Samsung, Microsoft, Lenovo, Huawei, and Sony. The finished goods are dispersed to retail outlets globally, and eventually land in the hands of consumers. Ideally a battery’s lifecycle ends in a recycling facility. However, not all batteries make it. According to Planet Green Recycle, only around 14 to 17 percent of cell phones are recycled each year. Recycling facilities disassemble cell phones into their plastic and metal components. #OTD 1959 United Dairies merges with Cow & Gate Ltd (of Guildford) to form Unigate Dairies.

From smugglers to supermarkets: the 'informal economy' touches us all. As I talk to him, Ahmed pulls his chair into his store to escape the hot Tunisian sun. 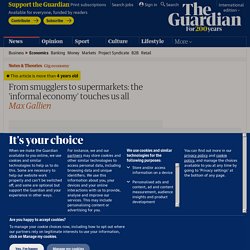 He is a retired teacher – the years of screaming children can be counted in the rings framing his eyes. Behind him is his merchandise. To make up for a small pension, Ahmed is selling kitchenware in a market near the Libyan border, over four hundred tiny concrete garages surround him, goods piled high: clothes, bags, microwaves. It looks like any other market, but note an invisible detail: everything sold here is illegal.

Guest blog: what is the thing with palm oil? This year we have been working with Dr Carolin Schurr in Switzerland. 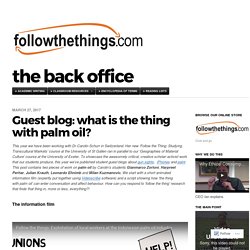 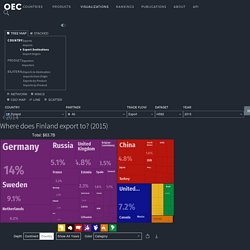 *****A Mini part's incredible journey shows how Brexit will hit the UK car industry. If there is just one anecdote that succinctly sums up the problems that Brexit and the threat of tariffs pose to the UK car industry, it is this: the story behind the crankshaft used in the BMW Mini, which crosses the Channel three times in a 2,000-mile journey before the finished car rolls off the production line. 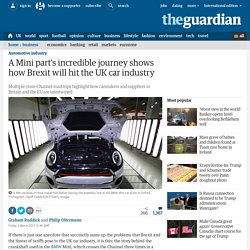 A cast of the raw crankshaft – the part of the car that translates the movement of the pistons into the rotational motion required to move the vehicle – is made by a supplier based in France. From there it is shipped to BMW’s Hams Hall plant in Warwickshire, where it is drilled and milled into shape. When that job is complete, each crankshaft is then sent back across the Channel to Munich, where it inserted into the engine. Ask Samsung to stop the destruction of 4.3 million Galaxy Note7 phones. Commonwealth trade in focus as UK prepares for Brexit. Commonwealth trade ministers gather today for the first-ever meeting of its kind, looking at ways of boosting trade relations among the 52 member nations. 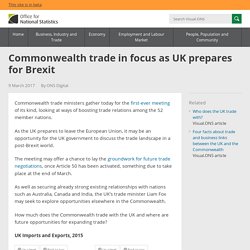 As the UK prepares to leave the European Union, it may be an opportunity for the UK government to discuss the trade landscape in a post-Brexit world. The meeting may offer a chance to lay the groundwork for future trade negotiations, once Article 50 has been activated, something due to take place at the end of March. As well as securing already strong existing relationships with nations such as Australia, Canada and India, the UK’s trade minister Liam Fox may seek to explore opportunities elsewhere in the Commonwealth. How much does the Commonwealth trade with the UK and where are future opportunities for expanding trade? UK Imports and Exports, 2015. *****Roman Empire trade routes #map #RomanEmpire.

(3/3) Kays of Scotland has exclusive rights to the Ailsa Craig granite. Enough has been harvested to fill orders until 2020. We’re working to increase awareness & get better resources into our phones. Here's how. How Ikea's Billy bookcase took over the world. Image copyright Ikea. OEC - Import origins of Finland (2014) Share Short URL Embed. From London Fashion Salons to Bay of Bengal, Brexit Looms Large - Bloomberg. Some 8,000 kilometers from London’s busy shopping districts, the economic ripple effects of Brexit are being felt in one of the world’s poorest nations. In Bangladesh, garment makers typically charge in U.S. dollars. For U.K retailers, that means import costs are rising in line with sterling’s 16 percent slump since Britain’s June vote to leave the European Union.

Reluctant to raise prices for shoppers, big high street brands are squeezing suppliers instead. Meet Elizabeth Martinez, who makes clothes for @winterwaterfactory. #imadeyourclothes. “What we uncovered about Ivanka Trump’s fashion line” by @Project_JUST. The World's Most Valuable Brands 2017 by Country. This Map Reveals the Top 2017 Brands for each Country. The geography of a Boeing! About Trump trade policies and manufacturing. Apple to start making iPhones in India, says state government. Image copyright Reuters Apple is to start making iPhones in the southern Indian state of Karnataka, the state's government has said. Ministers said Apple would start an initial manufacturing operation in the state, whose capital is the tech hub Bangalore, in April. The tech giant has a 2% share of India's mobile phone market, well behind South Korean rival Samsung.

Apple has yet to officially confirm the plan, saying only that it is keen to "invest significantly" in India. Quirky resources-related news from Tokyo - recycling phones to make Olympic medals #geography #geographyteacher. Humans’ stuff vastly outweighs humans. #r4today @BBCr4today Some'facts' on trading with Australia, a country with a population smaller than Tokyo. Deconstructed Nutella: nuts, cocoa – and 58% sugar. I like to use the table approach when the answering that dreaded question 'what is geography?' #geographyteacher. Car carrier Morning Carina departing the #thames this afternoon for Mombasa, Kenya, assisted by @Svitzer1833 tugs. Is the Library of Things an answer to our peak stuff problem? The expensive ‘Italian’ shoes made for a pittance in east European sweatshops.

Child refugees in Turkey making UK clothes. The grim truth of Chinese factories producing the west’s Christmas toys. Xiao Fang thinks she’s one of the luckier workers making Barbie dolls for the Christmas market at the Mattel toy factory in Chang’an. True, she says, she works 11-hour days, six days a week, and shares a dormitory with nine other women and gets to see her husband only once a week. Do you know where your clothes really come from? - EA life. 16:21 19 December 2016.