27 Tips For Becoming A Digital Teacher 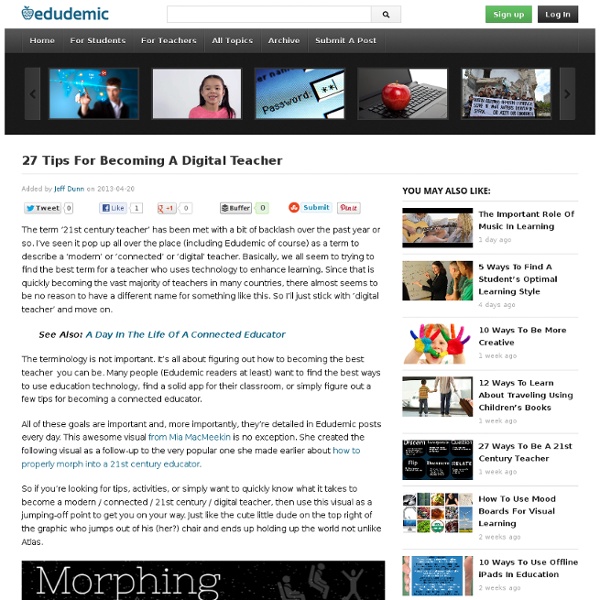 The term ’21st century teacher’ has been met with a bit of backlash over the past year or so. I’ve seen it pop up all over the place (including Edudemic of course) as a term to describe a ‘modern’ or ‘connected’ or ‘digital’ teacher. Basically, we all seem to trying to find the best term for a teacher who uses technology to enhance learning. See Also: A Day In The Life Of A Connected Educator The terminology is not important. All of these goals are important and, more importantly, they’re detailed in Edudemic posts every day. So if you’re looking for tips, activities, or simply want to quickly know what it takes to become a modern / connected / 21st century / digital teacher, then use this visual as a jumping-off point to get you on your way. Related:  robindi

50 Education Technology Tools Every Teacher Should Know About Steve is in the back, uploading your file We're sorry, but we could not find what you are looking for. Global Digital Citizen Foundation © 2015|terms & conditions|privacy policy Get ready for TED Talks Education, airing May 7 at 10pm TED is coming to a TV screen near you. On Tuesday, May 7, our first-ever television special will air on PBS at 10pm. Called TED Talks Education, the special is a deep dive on ideas to make our education system stronger – with talks from teachers, learning experts, education researchers and more. The speaker roster includes: host John Legend, educator Rita F. Set your DVR or mark your calendar now: May 7, 10pm, PBS. And stay tuned for much, much more, as TED will be kicking off Education Week on our site on May 6.

23 Things Every Teacher Should Be Able To Do With An iPad Using an iPad is simple due to its intuitive interface, elegant touch interface, and user-friendly operating system. Below we’ve listed 23 different tasks a teacher should be able to perform with their iPad. We’ve tried to focus on the basics, along with some typical tasks a teacher may be required to complete. We’ve also (roughly) arranged them from less complicated to more complicated, so consider yourself an Unofficial iPad “Basic Hacker” if you can get to the bottom. And let us know which important ones we’ve missed below on twitter or facebook. 1. Power button; long press and plug it in. 2. Apple has you covered: “To redeem an iTunes Gift Card or Gift Certificate, click the Redeem link in iTunes, enter the code on the card or certificate into the Redeem Code box on the page, and click the Redeem button. 3. For reference, check Apple’s help page, or Appducate’s page for some troubleshooting tips. 4. And this probably means social media messages, too. 5. 6. 7. 8. 9. 10. 11. 12. 13. 14.

The 7 Characteristics of Teachers Who Use Technology Effectively I just came across this awesome graphic shared by our colleagues in teachthought and I found it really interesting. The graphic features 7 habits of the highly effective teachers using technology. Even though the habits mentioned are generic , they still reflect part of the digital behavior teacher should embrace when using technology in their class. What is really interesting in this graphic is that all of these 7 habits are also the same features we find in people with " growth mindset ". If you still remember the comparison we have made between growth and fixed mindsets and we said that teachers with the growth mindset are more open to embrace change, take risks, persist in the face of setbacks, see effort as the path for mastery , and find lessons and inspiration in the success of others. Without any further ado, I ll let you go through these 7 habits and don't forget to let us know what you think of them. Priginal source of the graphic is always prepped

Say Hello to the Mobile E-Learning Revolution Not long ago, the iPad was nothing more than speculation. It was spec drawings on techie blogs and whispers at conventions that drew our interest and peaked our curiosity. Some claimed that this would be the device that finally ended Apple’s reign of supremacy. Others thought that this device would open up a whole new market segment that revolutionized the way we viewed personal computing as a whole. One year later, the iPad – and tablet devices in general (and even smartphones) have in fact changed the way we look at, and think about computing. It has made us realize that computers can be created to fully reflect their users, and that devices can be customized to meet their needs. Should E-Learning be any different? Here’s my thought on the matter. In the past, mobile learning had nothing to do with the individual learner. I’m not asking you to reinvent the wheel. This could not be further from the truth! Mobile platforms should be natural extensions of our existing materials.

How Teachers Use Technology: The Latest Research Back in 2011, I wrote a post about the "New Digital Divide." Based on Pew Research data from 2011, it was apparent that, while many previously marginalized populations now had more access to the Internet, these populations were accessing the Internet mostly through mobile devices, which are limiting, especially when trying to build and create online or access job applications or opportunities. Just this past week, Pew released a new study called How Teachers Are Using Technology at Home and in Their Classrooms. It explores how teachers use the Internet for their own professional learning, with their students and for communicating with families. Who's Connected and Who Isn't As a member of a large online community of educators through Twitter and other social media outlets, I know how much of an impact the Internet has had on educators and their classrooms across the world. Same Old Digital Divide

Twitter for Professional Development: Ultra Beginner Edition Written by Mark Brumley Using Twitter for professional development is extremely powerful. However, I often find myself in front of a room full of teachers with the majority having no idea how Twitter works. Even though you may be a social learning master, you must assume that most teachers (and the general public) are thoroughly confused and skeptical. Here’s some basic information to share. I’ll write this in a format that you can copy and paste into your own document to send to your faculty. Tutorial Starts Here: What is a Tweet? A tweet is a short message that can have up to 140 characters. Anatomy of a Tweet A tweet can certainly only contain text such as, “I just ate pizza for lunch.” Short message such as, “I just found a great language arts lesson plan!” So, a typical tweet contains: short message, link, hashtag Hashtags Hashtags provide a way to search millions of tweets and find content relevant to you. Hashtags are the key to finding relevant content. Finding Good Stuff

5 Features Technology Must Have Before Classroom Use Hyperboles run rampant when it comes to education technology. The old adage of ‘under promise and over deliver’ does not appear to be the cultural norm. Almost like a demigod, the education industry seeks the golden bullet that will solve the problem of providing an engaging personalized learning experience for every child and we assume it will have a USB port. Perhaps reflecting on historical advances in education will shed some light on the task. I recall with great fondness a teacher I worked with in my first appointment, she took great pleasure in explaining her use of some sort of jelly pad device which paint or ink was applied to. Using Technology Without The Art Behind It In much the same way as my efforts would be painful behind the world’s greatest piano, the use of technology as a tool without the art behind it is painful. So it is the buzzword of the last 10 years “Pedagogy” that makes the difference. Effective Use Of Education Technology

How can we use Connected Learning principles to promote 21st century learning? : KQED Education | KQED Public Media for Northern CA You can respond to this Do Now using Twitter, G+, Instagram, or Vine. Be sure to include #TeachDoNow in your response. Follow us on Twitter at @KQEDedspace and join our Google+ Community. For more info on how to use Twitter, click here. Click here to go back to the #TeachDoNow course Do Now How can we use Connected Learning principles to promote 21st century learning? Introduction Kids are learning everywhere. Clarissa is a 17-year-old aspiring screenwriter, growing up in a working-class household in the San Francisco Bay Area. This week we will examine the role of school in this larger context by working together as a community to explore physical learning spaces, course design and scheduling, assessment, learning activities, connections with the school community and the world, and other issues surrounding the design and implementation of 21st Century, Connected Learning Environments. Our driving design questions: Who are the students in our classrooms today? Resources More Resources

iPad sales: Apple’s next big thing isn’t a TV or smart glasses. It’s an old tablet Photo by Justin Sullivan/Getty Images The iPad has always labored under the shadow of its little brother the iPhone. When Apple launched the tablet back in the spring of 2010, everyone thought it was derivative—it’s just a big iPhone! Even now, after proving itself a worthy alternative to personal computers, the iPad rarely gets its due. When investors and financial analysts think about Apple’s future, they tend to focus on the iPhone, which remains the company’s cash cow. Poor iPad. But don’t frown, iPad. Meanwhile, you, Mr. iPad, aren’t nearly as vulnerable to the competition. Why am I so sure that the iPad will come to reign supreme at Apple? It’s the same story with the iPad. But it’s important to note that those rivals are selling their devices at cost—neither Amazon nor Google makes any profit on sub-$200 tablets. This raises a more basic question: Why are people willing to spend $329 on an iPad when they can get an Android tablet for $200?