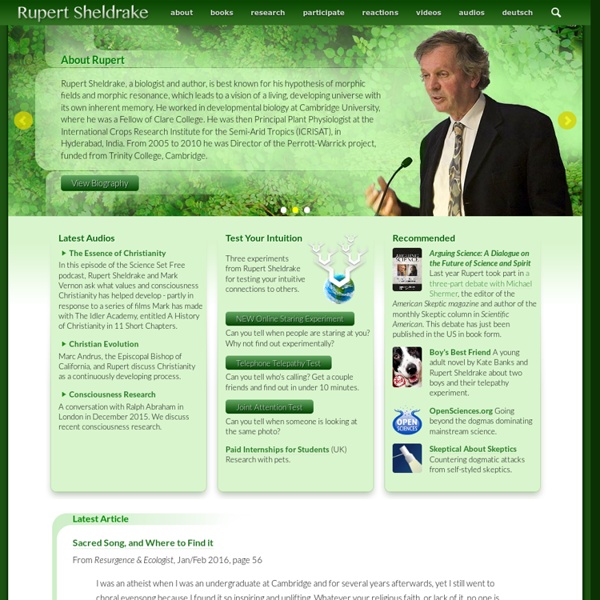 Rupert Sheldrake at EU 2013—"Science Set Free" (Parts 1 & 2) Part 1 of a talk by Rupert Sheldrake at the conference ELECTRIC UNIVERSE 2013: The Tipping Point, in Albuquerque, New Mexico. Many scientists like to think that science already understands the ways of the natural world. The fundamental questions are answered, leaving only the details to be filled in. The impressive achievements of science seemed to support this confident attitude. GDV CAMERA by DrK & Kirlian Techniques Original text Contribute a better translation Bio-Well – GDV CAMERA by Dr. Korotkov Special GDV Offers Best GDV Bio-Wel proposal

7 Extraordinary Books You Need to Read to Become Ecoliterate Complex networks and their unpredictable nature are rapidly transforming the world around us. The challenge is to learn to live with life, because we are embedded in it. We are systems, nested within systems, nested within systems. Luckily, great minds have seen this ‘crisis of perception’ coming and they have shared their thoughts with us. Pyraphi:LifeGiving Bioactive 'Phase Conjugate' FRACTAL FIELD Powered by Translate Life Force "Fractal Field" pyraphi.comPyr (fire in center) by Phi (Golden Ratio): A PYRAmidal Puri-PHI-er It's simple- we are trying to teach a pure principle here. There is a FIELD EFFECT- and charge field that creates life- versus death (Note the book 'Seed of Knowledge' below). Would a rose grow if it was not shaped like a rose.

Peter Sloterdijk in English [updated July 2013] Peter Sloterdijk (b.1947) is the coming man in philosophical anthropology (or rather, on the comeback after his first brush with fame in the 80s) — though his work is translated more often in French and Spanish than in English. His Sisyphean Spheres trilogy (1998, 1999, 2004), a decade in the making and as yet untranslated in English, seems to have prevented his work becoming more broadly known in the Anglo world. This has begun to change over the past year, as his hyperbolic philosophy has returned parabolically, as it were, his motifs of anthropo-technology, spherology and atmoterrorism having found their moment in this time of genetics, globalization and global warming.

5 Mind-Blowing Books That Are Worth The Struggle To Read Books are obstacle courses for the mind. By confronting us with paradigm shifting ideas they challenge us to stretch our capacity for understanding. And when we succeed, they will open up a world which we couldn’t see before. And then, in this unfamiliar world, we find ourselves having new thoughts and breaking new rules, using new magic and exploring new possibilities. IES AuraCloud 3D™ AuraCloud 3D Pro The AuraCloud 3D Pro Package offers all the exclusive features of our Basic package, but with added adaptations for specialized healers and retailers needing more in-depth options. Use the new AnimalAura Plates to read four-legged clientele: place paws on the plates for fast readings. Or slip on the ReikiTips to further enhance one-on-one therapeutic treatments. Aura Video Camera application is used in the photo at left.

Jason Silva Twitter.com/JasonSilva || Facebook.com/JASONLSILVA Contact me: Info(at)ThisIsJasonSilva(dot)com "A Timothy Leary of the Viral Video Age" was how The Atlantic described television personality, media artist, filmmaker and techno-philosopher Jason Silva, who has also been described as "part Timothy Leary, part Ray Kurzweil, and part Neo from 'The Matrix.'... The TED Conference called Jason a "Performance Philosopher", others have called Silva 'The new Carl Sagan' for his poetic, impassioned and inspirational take on scientific and technological advancements, his riveting on-stage delivery style, and his hyper-enthusiastic insights on creativity, innovation, technology, philosophy and the human condition. His non-commercial series of short videos, aptly named 'shots of philosophical espresso', explore the co-evolution of humans and technology and have gone viral with over 2 million views and "play like movie trailers for ideas," according to The Atlantic. Follow on twitter: @JasonSilva