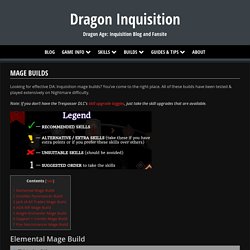 You’ve come to the right place. All of these builds have been tested & played extensively on Nightmare difficulty. Note: If you don’t have the Trespasser DLC’s skill upgrade toggles, just take the skill upgrades that are available. Click to show/hide Thanks to Malcolm AKA Dorian of House None of Your Business for the build! With access to 4 different spell schools, this build has high damage and also allows you to support at the same time with barrier and revival. Points Spent: 21+ Spirit: Barrier / Elegant Defense / Guardian Spirit / Mind Blast / Revival / Desperation / Strength of Spirits. Fanfiction Master Post. Dragon Age 2 Talent Builder. Guide Compilation for Dragon Age: Origins - Classes & Builds.

Ponies Are a Princess' Weakness (Moarrigan for you! /parries every single brick...) Dragon Age – The Revelation comic. By Evil Chris Priestly. 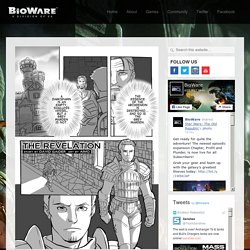 A collaboration with Ideas by David Gaider and Art by Aimo. We are very pleased to bring you an awesome new Dragon Age: Origins comic strip jointly created by one of the members of our Community, Irma Ahmed who is better known by her artist name Aimo with assistance from Dragon Age: Origins Lead Writer David Gaider. If you have not yet had a chance to see Aimo’s art, you should check out her personal art website here: Aimo Studio Fortunately for us, not only is Aimo/Irma a very talented artist, she is also a huge Dragon Age fan. She and David were talking one day and… actually, I think it would be better if Mr Gaider explained in his own words. David Gaider – “I’ve always been a big fan of Aimo’s art – she has an incredible ability to capture the emotions of her characters.

Check out Page 1 below and then click the links to see the full 8 pages. The Sound and the Fury: What we listened to while writing Dragon Age: Inquisition. If you wandered into the Writer’s Pit while Inquisition was in full swing, you probably would’ve seen seven writers (and one editor) with headphones on, eyes fixed on monitors, typing furiously. 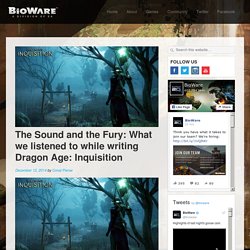 Most of the writing happens when we can shut out the rest of the world and immerse ourselves fully in the story and characters. For many of us, this requires music. Often the music we listen to informs and even inspires what we write. , I am the one thing in life I can control I am... You can't call a planet 'Bob' — Sing-quisition! Tavern Songs Reimagined. Elvish Name Generator. Name Generators. Girl Names Starting with Nel- at Baby Names Pedia - Page 3. Show Chapter. Art'n Stuff. D39. 'Dragon Age Inquisition': Trespasser - Building to an Emotional Theme. Font of Nothing. Dragon Age: Inquisition Wiki. PC Banter Trigger (Requires Cheat Engine) : dragonage. Lady Trevelyan sliders at Dragon Age: Inquisition Nexus. For anyone who is interested in playing female human, here are sliders of my character. 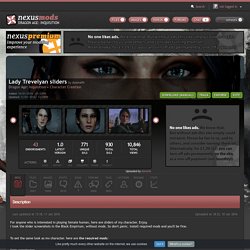 Enjoy.I took the slider screenshots in the Black Empirium, without mods. So don't panic. Install required mods and you'll be fine. To get the same look as my character, here are the required mods: -Female complexions -WIP- by Ascendia Ciri's complexionYou can use version with or without scars BUT chose one WITH EYEBROWS AND MAKEUP. -Elongated lashes by Ascendia -Ciri's Hair Attempt - Big Low Hair Bun by Elithabesu -Myfanwy's Eyes by appleofeden I highly recommend using One of the ReShade presets by Erika. Nipuni.tumblr. Thedas Photography (Dragon Age Inquisition) Dragon Age Inquisition Landscapes. David Gaider Interview Part 2: Dragon Age 2 wasn't meant to be a full game - General Discussion (Spoilers) We were talking before about Origins, what that meant to the players. 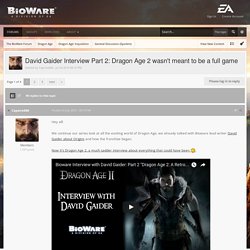 Now we’d love to talk more aboutDragon Age 2. How did that start? Why did you decide we’re going to Kirkwall now and it’s going to be more established characters. David Gaider: Dragon Age 2 was a project that happened very quickly. It went through a number of initial iterations. It happened so quickly that I’m not even sure my memory of it is quite correct in the order of events.

Part of the worry at the time was, does that make it sort of an interstitial kind of plot? When did you make the decision that instead of going with the introduction to the world that you did with the prologues in Origins, now you have a character that based on a very early choice in the game could have a very different experience, whether or not your brother or your sister dies? So, it was looking at the pros and cons. At what point did you decide that it would have to be either one? Early, that it would be one or other based on who you were. Shalizeh's DeviantArt gallery.