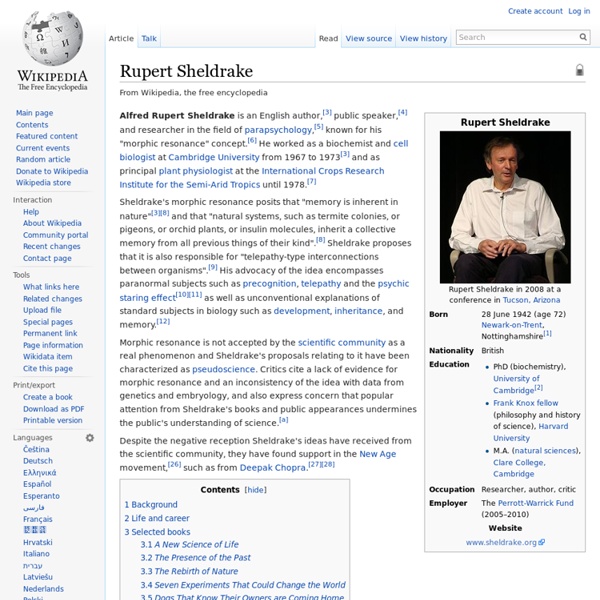 Alfred Rupert Sheldrake is an English author,[3] public speaker,[4] and researcher in the field of parapsychology,[5] known for his "morphic resonance" concept.[6] He worked as a biochemist and cell biologist at Cambridge University from 1967 to 1973[3] and as principal plant physiologist at the International Crops Research Institute for the Semi-Arid Tropics until 1978.[7] Sheldrake's morphic resonance posits that "memory is inherent in nature"[3][8] and that "natural systems, such as termite colonies, or pigeons, or orchid plants, or insulin molecules, inherit a collective memory from all previous things of their kind".[8] Sheldrake proposes that it is also responsible for "telepathy-type interconnections between organisms".[9] His advocacy of the idea encompasses paranormal subjects such as precognition, telepathy and the psychic staring effect[10][11] as well as unconventional explanations of standard subjects in biology such as development, inheritance, and memory.[12] Background

Ferdinand Lassalle Ferdinand Lassalle (1825–64) Ferdinand Johann Gottlieb Lassalle (11 April 1825 – 31 August 1864) was a German jurist, philosopher, and socialist political activist. Lassalle is best remembered as an initiator of international-style socialism in Germany. Biography[edit] Early life[edit] Ferdinand Lassalle was born on 11 April 1825 in Breslau (Wrocław), Silesia. Lassalle passed his university examinations with distinction in 1845 and thereafter traveled to Paris to write a book on Heraclitus. Back in Berlin to work on his book, Lassalle soon found himself ceasing his project in favor of a different mission. An extensive legal case ensued in which Lassalle represented Countess von Hatzfeldt's interests, performed in 36 courtrooms during the period of 8 years. The 1848 revolution and its aftermath[edit] While Lassalle was ultimately acquitted of this serious charge, he was kept in prison until he could be tried on a lesser charge of inciting resistance against public officials. The state[edit]

Rupert Sheldrake - Richard Dawkins comes to call Joseph Stiglitz Joseph Eugene Stiglitz, ForMemRS, FBA (born February 9, 1943) is an American economist and a professor at Columbia University. He is a recipient of the Nobel Memorial Prize in Economic Sciences (2001) and the John Bates Clark Medal (1979). He is a former senior vice president and chief economist of the World Bank, and is a former member, and Chairman of the Council of Economic Advisers.[2][3] He is known for his critical view of the management of globalization, free-market economists (whom he calls "free market fundamentalists"), and some international institutions like the International Monetary Fund and the World Bank. Life and career[edit] Stiglitz was born in Gary, Indiana, to Jewish parents, Charlotte (née Fishman) and Nathaniel D. Stiglitz.[13] From 1960 to 1963, he studied at Amherst College, where he was a highly active member of the debate team and president of the student government. In 2011, he was named by Foreign Policy magazine on its list of top global thinkers.[27]

Epigenetics and Soviet Biology One of the biggest controversies in twentieth-century biology was about the inheritance of acquired characteristics, the ability of animals and plants to inherit adaptations acquired by their ancestors. For example, if a dog was terrified of butchers because he had been mistreated by one, his offspring would tend to inherit his fear. Charles Darwin wrote a letter to Nature describing just such a case. The opposing view, promoted by the science of genetics, asserted that organisms could not inherit features their ancestors had acquired; they only passed on genes that they themselves had inherited. In Darwin's day, most people assumed that acquired characteristics could indeed be inherited. Lamarck emphasized the role of behaviour in evolution. The problem was that no one knew how acquired characteristics could be inherited. Pangenesis was rejected by Mendelian genetics, the theory that dominated twentieth century biology in the West.

Paul Krugman Paul Robin Krugman (born February 28, 1953) is an American economist, Professor of Economics and International Affairs at the Woodrow Wilson School of Public and International Affairs at Princeton University, Centenary Professor at the London School of Economics, and an op-ed columnist for The New York Times.[2][3] In 2008, Krugman won the Nobel Memorial Prize in Economic Sciences for his contributions to New Trade Theory and New Economic Geography. According to the prize Committee, the prize was given for Krugman's work explaining the patterns of international trade and the geographic concentration of wealth, by examining the effects of economies of scale and of consumer preferences for diverse goods and services. Krugman is known in academia for his work on international economics (including trade theory, economic geography, and international finance),[5][6] liquidity traps, and currency crises. Krugman is ranked among the most influential economic thinkers in the US.[7]

Sheldrake-Shermer, God and Science, Opening Statements Through the months of May, June, and July of 2015, TheBestSchools.org is hosting an intensive Dialogue on the Nature of Science between Rupert Sheldrake and Michael Shermer. During the third month, July, the focus will be on God and science. Dr. Sheldrake will defend the position that there is no conflict between science and the existence of God; evidence from conscious experience renders belief in God reasonable. Dr. For details about this dialogue, along with a complete guide to other portions of it, click here. To give our readers context for this dialogue, Drs. Sheldrake Opening Statement Dear Michael, I believe in God, and I am a church-going Christian, an Anglican (Episcopalian in the United States). Nevertheless, we probably agree about many things. For those who believe in God, the intelligibility of nature and the ability of human minds to understand some aspects of the natural world make sense because they have a common source, namely God. Rupert 1. Shermer Opening Statement Michael

Friedrich Nietzsche Friedrich Wilhelm Nietzsche (/ˈniːtʃə/[42] or /ˈnitʃi/;[43] German: [ˈfʁiːdʁɪç ˈvɪlhɛlm ˈniːt͡sʃə]; 15 October 1844 – 25 August 1900) was a German philologist, philosopher, cultural critic, poet and composer. He wrote several critical texts on religion, morality, contemporary culture, philosophy and science, displaying a fondness for metaphor, irony and aphorism. Nietzsche's key ideas include the Apollonian/Dionysian dichotomy, perspectivism, the Will to Power, the "death of God", the Übermensch and eternal recurrence. One of the key tenets of his philosophy is the concept of "life-affirmation," which embraces the realities of the world in which we live over the idea of a world beyond. Nietzsche began his career as a classical philologist — a scholar of Greek and Roman textual criticism — before turning to philosophy. As his caretaker, his sister assumed the roles of curator and editor of Nietzsche's manuscripts. Life[edit] Youth (1844–69)[edit] Nietzsche in 1861 Nietzsche, 1864

Banned TED Talk: Rupert Sheldrake – The Science Delusion Rupert Sheldrake is a fascinating member of the scientific world. The video below is of his TED talk where he covers “The Science Delusion.” This TED talk was controversially censored by the TED community after being aired. If you have studied any area of science on your own or in school, you may have noticed or have come across the fact that there are many differing beliefs in the scientific world. “How can science be stuck? I have been researching many areas of science, world events, health etc. over the past 5.5 years. Rupert Sheldrake outlines 10 dogmas he has found to exist within mainstream science today. 1. 2. 3. 4. 5. 6. 7. 8. 9. 10. Take The 30 Days of YOU Challenge! Take the free 30 Days of You Challenge and discover more about your heart, mind and soul. There's benefits associated with taking time to relax, meditate, do things you love etc, but that means taking YOU time! This challenge will help you set out on a journey that can transform your life.

Eduard Bernstein Life[edit] Bismarck's strict anti-Socialist legislation was passed on 12 October 1878. For nearly all practical purposes, the Social Democratic Party was outlawed and, throughout Germany, it was actively suppressed. The vehemence of Bernstein's opposition to the government of Bismarck made it desirable for him to leave Germany.[7] Shortly before the "Socialist Law" came into effect, he went into exile in Zurich, accepting a position as private secretary for social democratic patron Karl Höchberg, a wealthy supporter of Social Democracy. In 1891, he was one of the authors of the Erfurt Program, and from 1896 to 1898, he published a series of articles entitled Probleme des Sozialismus ("Problems of Socialism") that resulted in the revisionism debate in the SPD.[11] He also published a book titled Die Voraussetzungen des Sozialismus und die Aufgaben der Sozialdemokratie ("The Prerequisites for Socialism and the Tasks of Social Democracy") in 1899. Opinions[edit] References[edit]

Isaiah Berlin Sir Isaiah Berlin OM CBE FBA (6 June 1909 – 5 November 1997) was a Russian-British social and political theorist, philosopher and historian of ideas.[1] Although averse to writing, his improvised lectures and talks were recorded and transcribed, with his spoken word being converted by his secretaries into his published essays and books. Born in Riga, Latvia, in 1909, he moved to Petrograd, Russia, at the age of six, where he witnessed the revolutions of 1917. In 1921 his family moved to the UK, and he was educated at St Paul's School, London, and Corpus Christi College, Oxford.[2] In 1932, at the age of 23, Berlin was elected to a prize fellowship at All Souls College, Oxford. He translated works by Ivan Turgenev from Russian into English and, during the war, worked for the British Diplomatic Service. An annual Isaiah Berlin Lecture is held at the Hampstead Synagogue, at Wolfson College, Oxford, at the British Academy, and in Riga. Early life[edit] Education[edit] Personal life[edit]

Michel Foucault Born in Poitiers, France to an upper-middle-class family, Foucault was educated at the Lycée Henri-IV and then the École Normale Supérieure, where he developed an interest in philosophy and came under the influence of his tutors Jean Hyppolite and Louis Althusser. After several years as a cultural diplomat abroad, he returned to France and published his first major book, The History of Madness. After obtaining work between 1960 and 1966 at the University of Clermont-Ferrand, he produced two more significant publications, The Birth of the Clinic and The Order of Things, which displayed his increasing involvement with structuralism, a theoretical movement in social anthropology from which he later distanced himself. From 1966 to 1968, Foucault lectured at the University of Tunis, Tunisia before returning to France, where he became head of the philosophy department at the new experimental university of Paris VIII. Early life[edit] Youth: 1926–1946[edit] Early career: 1951–1955[edit]