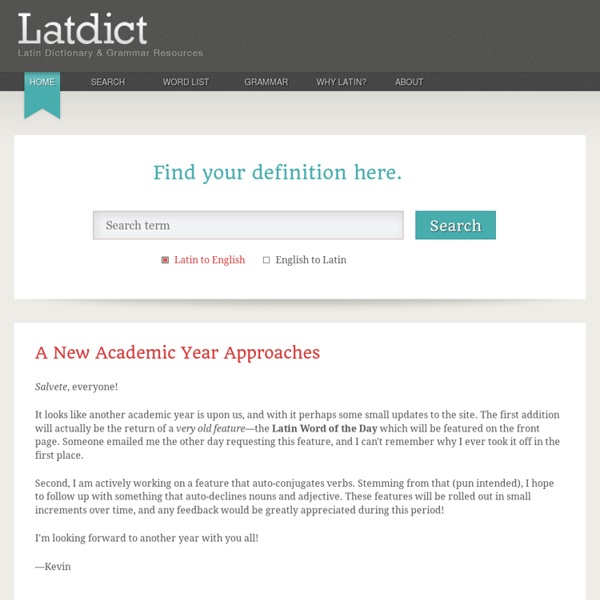 Ammian (Ammianus Marcellinus) The Text on LacusCurtius The English translation is by J. C. Rolfe, printed in the Loeb Classical Library edition, 1939‑1950: I followed my usual method and retyped it rather than scanning it; not only to minimize errors prior to proofreading, but as an opportunity for me to become intimately familiar with the work, an exercise which I heartily recommend. Except for that one passage, however, as of writing (early February 2008), the Latin text is still that of the unspecified edition on Forum Romanum, only a few errors being corrected, although I've already added most of the local links for chapters and sections — and all the snippets of Greek, uniformly garbled in the Forum Romanum transcription, have been restored. Further details on the technical aspects of the site layout follow the Table of Contents. The Author and the Text: Background Assessments of Rolfe's Translation Ask someone who had nothing to do with the book, however, and you can get some pretty stiff answers. J.

Beginners' Latin This tutorial is a beginners' guide to the Latin used in documents between 1086 and 1733. It is the first online tutorial to help you learn the Latin from this period. Try our new Advanced Latin The tutorial covers Latin as used in England between 1086 and 1733, when it was the official language used in documents. Latin. No previous knowledge of Latin is required. Be a beginner Want to refresh your skills Have studied classical Latin and want to find out about Latin from a different period All of the grammar is fully explained. You can practise by translating sentences taken from real documents held at The National Archives. , written in 1086. Where to start Tips on learning Latin Tutorial Twelve lessons Reference Word list, common problems, dating Latin documents and much more Activities More documents to practise on. Further practice

Geophysical Survey in Archaeological Field Evaluation | English Heritage This is the second edition of English Heritage guidelines on the application of geophysical survey to archaeological field evaluation first published in 1995. They are intended to help archaeologists, particularly curators, consultants and project managers, gain a better understanding of the various techniques of geophysical survey. It is also hoped that survey practitioners will find them useful in establishing a code of good practice with their clients as an aid to raising the consistency and quality of geophysical survey in archaeological evaluation. Much has changed since the first edition and the new guidelines have been extensively revised and expanded with new material including the addition of 29 colour figures. They are organised into four parts intended to group together information of most use for the different envisaged audiences: Standards for Geophysical SurveyGeophysical Survey and PlanningGuide to Choice of MethodsPractitioner's Guide to Good Practice

Lewis and Short Latin-English Lexicon Lewis & Short A Latin Dictionary (1879) Logeion For most purposes, this separate database for a single dictionary should now be obsolete. You can consult all these resources together in Logeion, which contains copies of the dictionaries that are more frequently updated, and more besides: the DGE and DuCange accompany LSJ and Lewis & Short, and you will also find frequency data, collocations, and examples from the corpus. Click the link here for an example. Tips for using this form Click SEARCH (or hit Enter at anytime) to execute your Search; click CLEAR to clear the entire form and start over. Source