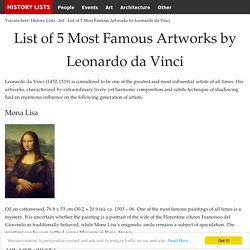 His artworks, characterized by extraordinary lively yet harmonic composition and subtle technique of shadowing had an enormous influence on the following generation of artists. Mona Lisa Oil on cottonwood, 76.8 x 53 cm (30.2 x 20.9 in), ca. 1503 – 06. One of the most famous paintings of all times is a mystery. The Last Supper Tempera on gesso, pitch and mastic, 460 x 880 cm (181 x 346 in), 1495 – 97. Vitruvian Man Pen and ink on paper, 34.3 x 24.5 cm (13.5 x 9.6 in), ca. 1490. Lady with an Ermine Oil on wood panel, 55 x 40 cm (21.6 x 15.7 in). c. 1490. Self-portrait in red chalk. Leonardo da Vinci - Artist, Mathematician, Inventor, Writer. Leonardo da Vinci was a leading artist and intellectual of the Italian Renaissance who's known for his enduring works "The Last Supper" and "Mona Lisa. " Synopsis Born on April 15, 1452, in Vinci, Italy, Leonardo da Vinci was the epitome of a “Renaissance man.” Possessor of a curious mind and keen intellect, da Vinci studied the laws of science and nature, which greatly informed his work as a painter, sculptor, architect, inventor, military engineer and draftsman.

His ideas and body of work—which includes "Virgin of the Rocks," "The Last Supper" and "Mona Lisa"—have influenced countless artists and made da Vinci a leading light of the Italian Renaissance. Humble Beginnings Leonardo da Vinci was born on April 15, 1452, in a farmhouse nestled amid the undulating hills of Tuscany outside the village of Anchiano in present-day Italy. At the age of 20, da Vinci qualified for membership as a master artist in Florence’s Guild of Saint Luke and established his own workshop. Final Years Videos. Leonardo da Vinci: Anatomy of an artist. Leonardo’s interest in human anatomy can be traced back to the late 1480s, when he was court artist to Ludovico Maria Sforza, the ruler of Milan. 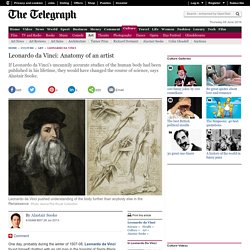 “On the 2nd day of April 1489”, as Leonardo dated the first page in a new notebook now known as the Anatomical Manuscript B, the self-styled “disciple of experience” began a projected “Book entitled On the Human Figure”. Its 44 folios contain several exquisite drawings of a human skull. In time, though, Leonardo’s scattershot attention shifted elsewhere, and he stopped work on his treatise. “In the early 1490s, he felt frustrated,” says Clayton. “Although he was able to get hold of a skull, he had very little access to human material, and the aims he had set himself were foundering. By the time that he dissected the centenarian in Florence, Leonardo was a public figure with sufficient clout to conduct post-mortem examinations. 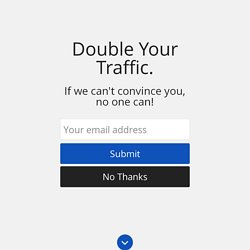 For more awesome articles like this — join our community! Many things are known about Leonardo di ser Piero da Vinci, yet many things still await to be discovered (and sadly, many will never be discovered). Widely considered an archetipe of the “Renaissance man”, he was a man whose curiosity was equaled only by his intelligence and talent. Among others, he was a scientist, mathematician, engineer, inventor, anatomist, painter, sculptor, architect, botanist, musician and writer. Many claim he was the smartest man to ever live – a true genius – while others claim he was the most talented to ever live… either way, one thing’s for sure: he was a one of a kind. Scissors Something as simple yet as important as the scissors had a huge importance in the development of mankind. 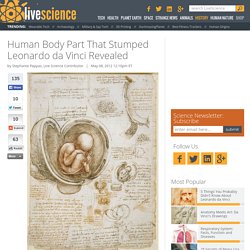 That's probably because Leonardo had a tough time finding female corpses to dissect, explains Peter Abrahams, a practicing physician at the University of Warwick Medical School in the United Kingdom. Abrahams, a clinical anatomist, has lent his knowledge to an audio tour of the exhibit of Leonardo's anatomical drawings that opened May 4 in Buckingham Palace. The Italian Renaissance artist learned anatomy as a way to improve his drawings of the human form, but he also brought a scientist's eye to the discipline. "He wanted to understand how it worked," Abrahams told LiveScience. "He looked at humans like a mechanic would do. Anatomists in Leonardo's time often dissected unclaimed bodies, such as of drunks and vagrants, and those bodies were more likely to be male, Abrahams said.