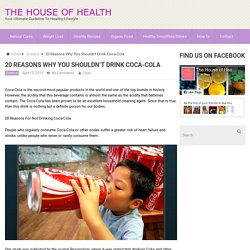 However, the acidity that this beverage contains is almost the same as the acidity that batteries contain. The Coca-Cola has been proven to be an excellent household cleaning agent. Since that is true, than this drink is nothing but a definite poison for our bodies. 20 Reasons Why You Shouldn’t Drink Coca-Cola. 20 Practical Uses for Coca Cola – Proof That Coke Does Not Belong In the Human Body - The House of Health.

7 Industrial Uses for Coke Which Prove It’s NOT Fit for Human Consumption. Watch What Could Happen to Your Body If You Drank 10 Cans of Coke a Day. Drinking just 12 ounces of soda a day can boost your chance of dying from heart disease by one-third, but what would happen if you downed 10 sugar-filled cans of Coca-Cola every day for 30 days? 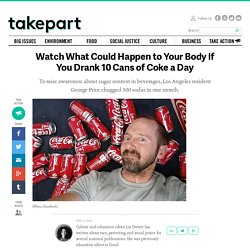 Fortunately, you don’t have to go to such extreme lengths to find out, because 50-year-old Los Angeles resident George Prior has done it for you. Prior, who follows the Paleo diet and works out regularly, wrote on his blog that he decided to do the Super Size Me–style project because he wanted to raise awareness about how easy it is to ingest hundreds of grams of hidden sugar through beverages. Watch What Could Happen to Your Body If You Drank 10 Cans of Coke a Day. 25 Practical Uses for Coca-cola, Proof It Should Not Be In Human Body. Coca Cola Veneno Satânico ,Vazou na Web! fórmula O Segredo Finalmente Revelado!!!

5 segredos da Coca Cola desmascarados!!! 13 Ways To Stop Drinking Soda For Good. By Amanda MacMillan You know soda’s not exactly good for you — but at the same time, it can be hard to resist. 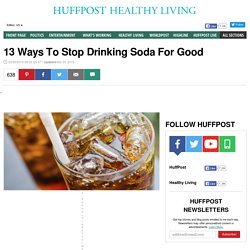 Its sweet taste, pleasant fizz and energizing jolt often seems like just what you need to wash down your dinner, get you through an afternoon slump or quench your thirst at the movies. But the more soda you consume (regular or diet), the more hazardous your habit can become. And whether you’re a six-pack-a-day drinker or an occasional soft-drink sipper, cutting back can likely have benefits for your weight and your overall health.

The biggest risk for regular soda drinkers is the excess calories, says Lona Sandon, RD, assistant professor of clinical nutrition at the University of Texas Southwestern Medical Center. Sugar-Sweetened Beverages. Liquid sugar, such as in sodas, energy drinks and sports drinks, is the leading single source of added sugar in the American diet, representing 36% of the added sugar we consume.1 And there's growing scientific evidence that it's the most dangerous way to consume added sugar. 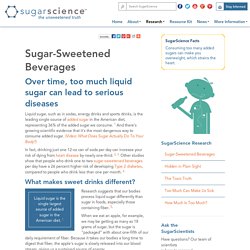 (Video: What Does Sugar Actually Do To Your Body?) In fact, drinking just one 12-oz can of soda per day can increase your risk of dying from heart disease by nearly one-third.2,3 Other studies show that people who drink one to two sugar-sweetened beverages per day have a 26 percent higher risk of developing Type 2 diabetes, compared to people who drink less than one per month.4 What makes sweet drinks different? Liquid sugar is the single largest source of added sugar in the American diet.1 Research suggests that our bodies process liquid sugar differently than sugar in foods, especially those containing fiber.5, But when we drink the same amount of sugar in sugary drinks, it doesn't include that fiber. Sources [1]U.S. What Happens To Our Bodies After Drinking Coca-Cola? After 10 minutes Ten tea spoons of sugar contained in a glass of Cola, cause devastating “strike” on the organism and the only cause, by reason of not vomiting, is the phosphoric acid which inhibits the action of sugar. 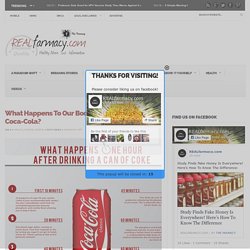 After 20 minutes A leap of insulin levels in bloodstream occurs. The liver converts all the sugar into fat. Here's What's Wrong With That Viral Coca-Cola Graphic. On Live TV BBC Journalist Shows Coca-Cola President How Much Sugar Is In Their Drink. We consume so much sugar on a daily basis, most of which is not even real, natural, or organic, and it’s probably one of the worst possible things we could be putting in our bodies. 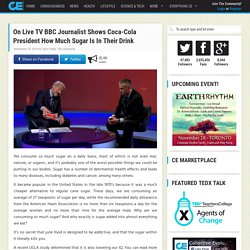 Sugar has a number of detrimental health effects and leads to many diseases, including diabetes and cancer, among many others. It became popular in the United States in the late 1970’s because it was a much cheaper alternative to regular cane sugar. These days, we are consuming an average of 27 teaspoons of sugar per day, while the recommended daily allowance from the American Heart Association is no more than six teaspoons a day for the average woman and no more than nine for the average male. Why are we consuming so much sugar? And why exactly is sugar added into almost everything we eat? It’s no secret that junk food is designed to be addictive, and that the sugar within it literally kills you.

A recent UCLA study determined that it is also lowering our IQ. You Still Have A Choice. Takepart. Carbonated water, some sort of coloring agent, and high fructose corn syrup. 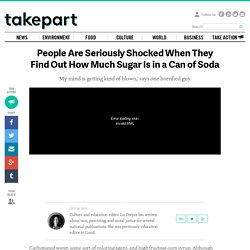 Although consumers of soda can read the typical ingredients listed on the side of a 12-ounce can, the average person might not realize just how much 39 grams (or more) of sugar is. That’s where the folks from the Center for Science in the Public Interest come in. They set up a booth in downtown Denver, made cola from scratch for passersby, and filmed their reactions. As seen in the video above, no one wanted to sip fizzy water with 10 packets of sugar and caramel coloring dumped in. How one of the most obese countries on earth took on the soda giants. Mexicans love their soda. 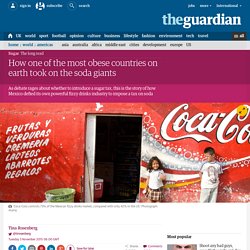 Construction workers go to their jobs in the early morning clutching giant two-litre or even three-litre bottles. Babies in strollers suck on bottles filled with orange soda. In the highlands of Chiapas, Coca-Cola is considered to have magical powers and is used in religious rites. In fact, Mexicans drink more soda than nearly anyone else in the world; their top three daily sources of calories in 2012 were all high-calorie drinks.

As more and more research investigates the ill effects of soda on the human body (and the environment), it may be time for you to give it up, or at least reduce the amount you intake on a daily or weekly basis. The evidence speaks for itself: Your health will drastically improve once you begin replacing your daily Coke or Mountain Dew with water. Pretty much every organ will benefit from quitting soda, as explained below. Heart First and foremost, you’ll be taking better care of your heart the moment you put down the soda.

Brain Many people reach for a Diet Coke or a soft drink in the drowsy after-lunch hours at work, hoping to get a caffeine and sugar boost. Photos du journal - Quebrando o Tabu. 10 Reasons to Dump Diet Soda - Mamavation. Well.blogs.nytimes. Photo When the American Academy of Pediatrics needed support for a website it created to promote children’s health, it turned to a surprising partner: Coca-Cola. The world’s largest maker of sugary beverages, Coca-Cola has given nearly $3 million to the academy over the past six years, making it the only “gold” sponsor of the HealthyChildren.org website. Even though the pediatric academy has said publicly that sugary drinks contribute to the obesity epidemic, the group praises Coke on its website, calling it a “distinguished” company for its commitment to “better the health of children worldwide.”

The extent of the financial ties between Coke and the Academy of Pediatrics was revealed last week when the company released a detailed list of nearly $120 million in grants, large and small, given to medical, health and community organizations since 2010. Dr. Dr. “The purpose of the academy, of which I am a proud member, is to protect the health and lives of children,” said Dr. Mr. Takepart. As a public health threat, soda is less the suspect than the messenger.

Thanks to countless infographics, PSAs, and news stories revealing the astonishing number of teaspoons of sugar contained in a can of soda, it’s clear that the sweetener is the real culprit. High levels of consumption are linked not only with obesity but with the development of other chronic diseases, such as diabetes. There’s more to worry about when it comes to soda—namely, cancer. According to a new study by Consumer Reports and the Center for a Livable Future at the John Hopkins Bloomberg School of Public Health, sodas routinely have high levels of the chemical 4-methylimidazole, or 4-MEI, a common component of the caramel coloring that gives cola drinks their signature brown hue. The U.S. The researchers looked at 110 sodas bought at retail locations in New York and California.