1_History_Sound_Design. Italian Renaissance Theatre History Project by Sabrina Guvenc on Prezi. Renaissance/Elizabethan - Theater Costumes. Panes- loose, parochial fitting sleeves Cod piece- a pouch made from materials of other undergarments, secured by buckles or laces, had a decorated covering in front. 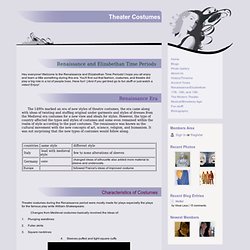 Renaissance English Drama: Elizabethan Theatre Venues: Playhouses. The old Medieval stage of "place-and-scaffolds," still in use in Scotland in the early sixteenth century, had fallen into disuse; the kind of temporary stage that was dominant in England about 1575 was the booth stage of the marketplace—a small rectangular stage mounted on trestles or barrels and "open" in the sense of being surrounded by spectators on three sides. 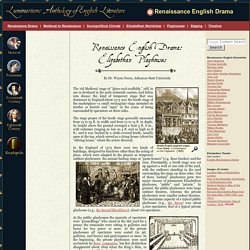 The stage proper of the booth stage generally measured from 15 to 25 ft. in width and from 10 to 15 ft. in depth; its height above the ground averaged a bout 5 ft. 6 in., with extremes ranging as low as 4 ft. and as high as 8 ft.; and it was backed by a cloth-covered booth, usually open at the top, which served as a tiring-house (short for "attiring house," where the actors dressed). Playwrites of the Renaissance. Undefined Home Here are a few Renaissance Playwrights that are worthy of recognition. 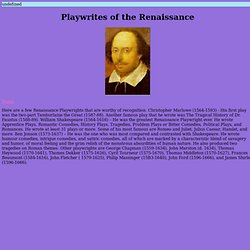 Renaissance Theatre Design & Staging- England by Victoria Waslen on Prezi. Renaissance stage lighting. Theater: Renaissance Theaters. After the advent of the Renaissance in Italy there were various attempts to construct theaters on Roman models, the culmination of this movement being the Teatro Olimpico (1580–84) at Vicenza, designed by Andrea Palladio. 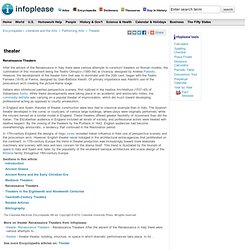 However, the development of the theater form that was to dominate until the 20th cent. began with the Teatro Farnese (1618) at Parma, designed by Gian-Battista Aleotti. Of primary importance was Aleotti's use of the proscenium arch creating the picture-frame stage. Italians also introduced painted perspective scenery, first outlined in the treatise Architettura (1537–45) of Sebastiano Serlio. While these developments were taking place in an academic and aristocratic milieu, the commedia dell'arte was carrying on a popular theater of improvisation, which did much toward developing professional acting as opposed to courtly amateurism. In England and Spain, theories of theater construction were less tied to classical example than in Italy.

Scene design and stage lighting: The Renaissance to the Seventeenth Century. The renaissance of scene design began in Italy. 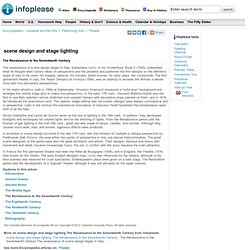 Sebastiano Serlio, in his Architettura, Book II (1545), interpreted what he thought were classic ideas on perspective and the periaktoi and published the first designs on the definitive types of sets to be used—for tragedy, palaces; for comedy, street scenes; for satyr plays, the countryside. The first permanent theater in Italy, the Teatro Olimpico at Vicenza (1584), was an attempt to recreate the Roman scaenae frons with five permanent perspectives.

In his teatro all'antico, built (c.1589) at Sabbioneta, Vincenzo Scamozzi employed a "solid drop" background and enlarged the central stage arch to make one perspective. Kids Work! > History of the Theater. In the Renaissance (Re-nais-sance) period, from the fourteenth to the seventeenth centuries, an interest in classical Greek and Roman art, culture and theater returned. 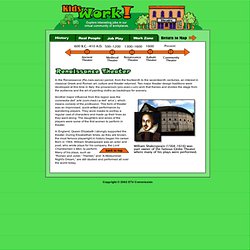 Two major theater design traditions were developed at this time in Italy: the proscenium (pro-scen-i-um) arch that frames and divides the stage from the audience and the art of painting cloths as backdrops for scenery. Another major influence from this region was the commedia dell’ arte (com-med-i-a dell’ art-e’), which means comedy of the profession. This form of theater was an improvised, quick-witted performance by wandering players.

They wore masks to portray a regular cast of characters and made up their lines as they went along. Renaissance Theater. <hr><p><b>You must have javascript enabled to view this website. 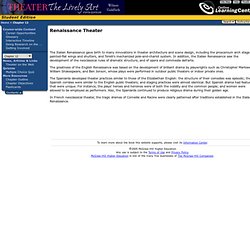 Please change your browser preferences to enable javascript, and reload this page. </b></p><hr> Renaissance. Renaissance Costume History Around the 1490's is when costume historians can agree that the new dress for Renaissance began. 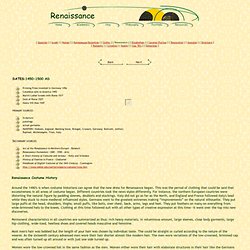 This was the period of clothing that could be said that excessiveness in all areas of costume began. Different countries took the news styles differently. For instance, the northern European countries were distorting the natural figure by padding sleeves, doublets and stockings. Italy did not go as far as the North, and England and France followed Italy's lead while they stuck to more medieval influenced styles. Permanent characteristics in all countries are summarized as thus: rich heavy materials, in voluminous amount, large sleeves, close body garments, large hip-clothing, wide-toed, heelless shoes and covered heads masculine and feminine. 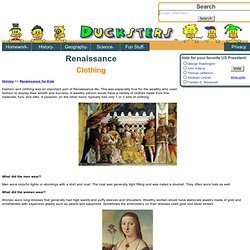 This was especially true for the wealthy who used fashion to display their wealth and success. A wealthy person would have a variety of clothes made from fine materials, furs, and silks. A peasant, on the other hand, typically had only 1 or 2 sets of clothing. What did the men wear? Men wore colorful tights or stockings with a shirt and coat.

Medieval & Renaissance - The History of Theatre: Costumes. In the Medieval period, both men and women wore their hair in loose, long curls. 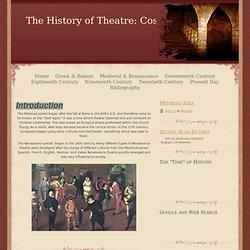 The longer the hair was, the higher social class you belonged to. A women often shaved off the hair on top of their forehead to give themselves a higher hairline. Foreheads were often decorated with pearls and stones or they sometimes wore hair nets. Untitled Document. About Doctor Faustus Classics versus moderns There are those who maintain that the Greeks are closer to us than the Elizabethans. 'Thucydides is more modern than Sir Walter Raleigh', writes Matthew Arnold, comparing two historians, one from 400 BC and the other, 2,000 years closer to us in time, from 1600 AD. The Greeks certainly seem more humane, more natural and spontaneous, than many bombastic, bigoted witch-hunting types from the Middle Ages and from more recent periods - and I am not just thinking of Dr Ian Paisley and the IRA.

The question of whether and how Greek culture, Greek values, Greek art can be transposed into a modern environment is one which has occupied and preoccupied many thinkers from the Renaissance onwards. They worshipped a plurality of deities, and seemed to have no difficulty in believing that the 'gods' were a disorderly group of scoundrels who could harm as well as help individual human beings for reasons that were not always clearly discernible. Irony 1. 2. Attitudes Towards Plays and Players. Renaissance English Drama: From Medieval to Renaissance. English Renaissance drama grew out of the established Medieval tradition of the mystery and morality plays (see Medieval English Drama). These public spectacles focused on religious subjects and were generally enacted by either choristers and monks, or a town's tradesmen (as later seen lovingly memorialized by Shakespeare's 'mechanicals' in A Midsummer Night's Dream).