Leonardo Da Vinci - The Genius. The Anatomy of Renaissance Art. Medici: Godfathers of the Renaissance . Resources . Art Gallery - Index. Renaissance Art. Dogs are a common visual motif in Western art and have been called the “artist’s best friend” for their role as companion and life model. 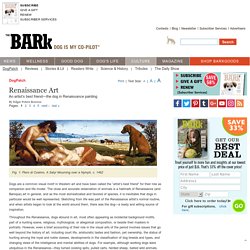 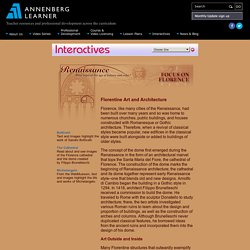 Therefore, when a revival of classical styles became popular, new edifices in the classical style were built alongside or added to buildings of older styles. The Early Renaissance in Florence. Renaissance (1300s-1600s) ART HISTORY ON DEMAND > Periods and Styles in Western Art > In the early 1400's a new movement in art and literature began in Italy. 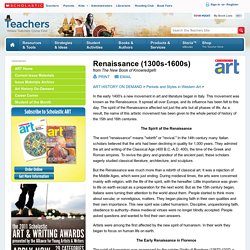 This movement was known as the Renaissance. It spread all over Europe, and its influence has been felt to this day. Perspective: The Rise of Renaissance Perspective. Khanacademy. Renaissance Art - History for kids. Renaissance patrons wanted art that showed joy in human beauty and life’s pleasures. 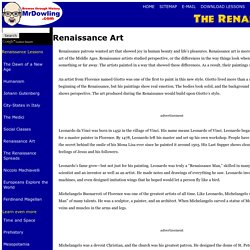 Renaissance art is more lifelike than in the art of the Middle Ages. Renaissance artists studied perspective, or the differences in the way things look when they are close to something or far away. The artists painted in a way that showed these differences. As a result, their paintings seem to have depth. An artist from Florence named Giotto was one of the first to paint in this new style. Advertisement. Renaissance art. Renaissance Art - Facts & Summary. By the end of the 15th century, Rome had displaced Florence as the principal center of Renaissance art, reaching a high point under the powerful and ambitious Pope Leo X (a son of Lorenzo de’ Medici). 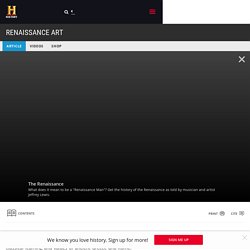 Italian painter and architect. Raphael - Painter, Architect. A leading figure of Italian High Renaissance classicism, Raphael is best known for his "Madonnas," including the Sistine Madonna, and for his large figure compositions in the Palace of the Vatican in Rome. 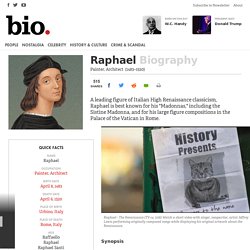 Synopsis Raphael was born on April 6, 1483, in Urbino, Italy. He became Perugino's apprentice in 1504. Living in Florence from 1504 to 1507, he began painting a series of "Madonnas. " Log In. The piece he will show, which he bought from the estate of a Turin art dealer, Giancarlo Gallino, for a price he declines to disclose, has been seen so far by few people in the art world. 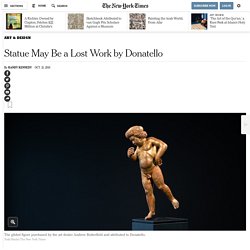 So it is not entirely possible to gauge how it will be received. But the scholars that Mr. Butterfield has lined up on his side are eminent and believe that several factors — including ones as humble as a piece of iron hardware at the putto’s back, once used to secure it to a wall — point definitively to Donatello and specifically to the 1430s. “I would say that this is an extremely solid case,” said Eike Schmidt, a German expert in Florentine art who was recently named the director of the Uffizi Gallery in Florence. Italian sculptor. Medici: Godfathers of the Renaissance . Renaissance . Vasari. Vasari was more of an impresario than a great painter, he could even be called one of the first spin-doctors. 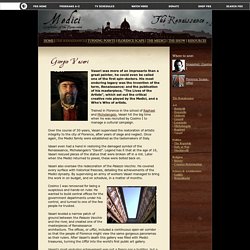 His most enduring legacy was the invention of the term, Renaisssance; and the publication of his masterpiece, “The Lives of the Artists”, which set out the critical creative role played by the Medici, and a Who's Who of artists. Trained in Florence in the school of Raphael and Michelangelo, Vasari hit the big time when he was recruited by Cosimo I to manage a cultural campaign. Over the course of 30-years, Vasari supervised the restoration of artistic integrity to the city of Florence, after years of siege and neglect. Once again, the Medici family were established as the tastemakers of Italy. Vasari even had a hand in restoring the damaged symbol of the Renaisssance, Michelangelo's “David”. Medici: Godfathers of the Renaissance . Renaissance . Raphael. Born Raffaele Sanzio in 1483, Raphael came to prominence at the court of Pope Julius II, whose portrait he painted in 1512. 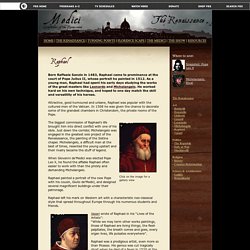 As a young man, Raphael had spent his early days studying the works of the great masters like Leonardo and Michelangelo. He worked hard on his own technique, and hoped to one day match the skill and versatility of his heroes. Medici: Godfathers of the Renaissance . Renaissance . Michelangelo. Michelangelo was responsible for some of the finest works of art in Western history including “David”, the ceiling of the Sistine Chapel, “Pieta” and the “Last Judgement”. 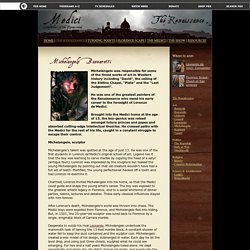 He was one of the greatest painters of the Renaisssance who owed his early career to the foresight of Lorenzo de'Medici. Brought into the Medici home at the age of 13, the boy-genius was raised amongst future princes and popes and absorbed cutting-edge intellectual theories. He crossed paths with the Medici for the rest of his life, caught in a constant struggle to escape their control. Medici: Godfathers of the Renaissance . Renaissance . Leonardo. The most famous artist in the world, Leonardo was nurtured by Lorenzo de'Medici. Botticelli, Michelangelo and da Vinci equalled unparalleled genius, now known as the “High Renaissance”. Leonardo was more than just an artist. It is argued that no man has ever studied more subjects or generated more ideas, than Leonardo da Vinci.

Medici: Godfathers of the Renaissance . Renaissance . Gozzoli. Benozzo Gozzoli was a popular Renaissance painter and contemporary of Ghiberti, Brunelleschi and Fra Angelico and is best-remembered for his fresco inside the Medici palace. Many consider it one of the finest of the Renaisssance. As a young man Gozzoli assisted Fra Angelico with the frescoes of San Marco, commissioned by Cosimo de'Medici. But he had to wait until he was 40 to get the most important commission of his career. Gozzoli was approached by Cosimo to decorate a private chapel in the newly-completed Medici palace. Designed by Michelozzo, the Medici palace was a monolithic fortress of iron and stone, simply designed, to reflect Cosimo's classical tastes.

Anxious to please his patron, Gozzoli chose to illustrate a mythical procession of the three wise men, the Magi. He experimented with gleaming colors, gold leaf and ultramarine. Medici: Godfathers of the Renaissance . Renaissance . Ghiberti. Lorenzo Ghiberti was among the most prolific and innovative sculptors in Renaissance Florence. He is best remembered for “The Gates of Paradise”, the magnificent doors of the Baptistery of St John, cast in glittering bronze.

In 1401 the people of Florence decided their baptistry needed spectacular new doors. A competition was held to find the most suitable sculptor. There were really only two contenders: the temperamental goldsmith, Filippo Brunelleschi, and the sculptor, Lorenzo Ghiberti. Brunelleschi slaved away behind closed doors and perfected his models in secrecy. Ghiberti changed his designs to suit the public's tastes, thus ensuring his eventual victory. Medici: Godfathers of the Renaissance . Renaissance . Botticelli. Born to a poor tanner in the backstreets of Florence, Alessandro Filipepi was brought up by his brother who gave him the nickname botticelli, meaning “little barrel”. The name stuck, and Botticelli's art became the most intelligent, creative and recognizable voice of the Florentine Renaissance. Only five years older than Lorenzo de'Medici, by the late 1460s Botticelli had made a name for himself under the apprenticeship of Filippo Lippi, an infamous Medici artist.

The teenager was originally spotted by Piero il Gottoso and offered his own studio space inside the Medici Palace. Medici: Godfathers of the Renaissance . Renaissance . Donatello. Donatello (ca. 1386–1466) Donatello - Artist, Sculptor. Italian sculptor Donatello was the greatest Florentine sculptor before Michelangelo (1475–1564) and was the most influential individual artist of the 15th century in Italy. Synopsis Born in Florence, Italy, around 1386, sculptor Donatello apprenticed early with well-known sculptors and quickly learned the Gothic style. Before he was 20, he was receiving commissions for his work. Over his career he developed a style of lifelike, highly emotional sculptures and a reputation second only to Michelangelo's. Early Life Donatello, the early Italian Renaissance sculptor, was born Donato di Niccolo di Betto Bardi in Florence, Italy, sometime in 1386. There are accounts by some historians that Donatello and Brunelleschi struck up a friendship around 1407 and traveled to Rome to study classical art.