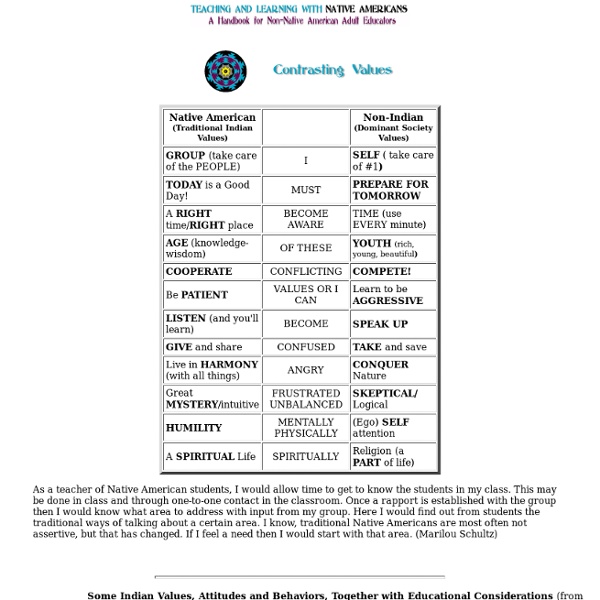 Attitudes and Behaviors Talking for the sake of talking is discouraged. In days past in their own society, Indians found it unnecessary to say hello, good-bye, how are you, and so on. Educational Considerations The difference in the degree of verbosity may create a situation in which the Indian does not have a chance to talk at all.

Index of Native American Resources on the Internet - WWWVL American Indians Search this site Recommend this website to a friend!Frequently Asked Questions for this site Please read this document before sending any email! Worried about online scams? © 1994 - 2017 Text and Graphics Karen M. You are visitor number 3558171!

Lojong Lojong (Tib. བློ་སྦྱོང་,Wylie: blo sbyong) is a mind training practice in the Tibetan Buddhist tradition based on a set of aphorisms formulated in Tibet in the 12th century by Geshe Chekhawa. The practice involves refining and purifying one's motivations and attitudes. The fifty-nine or so slogans that form the root text of the mind training practice are designed as a set of antidotes to undesired mental habits that cause suffering. Prominent teachers who have popularized this practice in the West include Pema Chodron,[1] Ken McLeod, Alan Wallace, Chogyam Trungpa, Sogyal Rinpoche, Geshe Kelsang Gyatso, and the 14th Dalai Lama.[2] History of the practice[edit] Atiśa journeyed to Sumatra and studied with Dharmarakṣita for twelve years. A story is told that Atiśa heard that the inhabitants of Tibet were very pleasant and easy to get along with. The aphorisms on mind training in their present form were composed by Chekawa Yeshe Dorje (1101–1175 CE). The Root Text[edit] Slogan 1. 1. 2. 3. 4.

free buddhist audio : free mp3s and texts on buddhism, meditation and the arts Did you know American Indian Stories. American Indian Stories by Zitkala-Sa [aka Gertrude Simmons Bonnin] (1876-1938). Washington: Hayworth Publishing House, 1921. [Page] [Frontispiece] ZITKALA-SA (Gertrude Bonnin)A Dakota Sioux Indian [Title Page] BY ZITKALA-SA (Gertrude Bonnin ) Dakota Sioux Indian Lecturer; Author of "Old Indian Legends," "Americanize the First American," and other stories; Member of the Woman's National Foundation, League of American Pen-Women, and the Washington Salon "There is no great; there is no small; in the mind that causeth all " WashingtonHayworth Publishing House1921 [Page] Impressions of an Indian Childhood A WIGWAM of weather-stained canvas stood at the base of some irregularly ascending hills. Here, morning, noon, and evening, my mother came to draw water from the muddy stream for our household use. "Hush; my little daughter must never talk about my tears"; and smiling through them, she patted my head and said, "Now let me see how fast you can run today." I was a wild little girl of seven. So! "How!

7 Basic Things You Won't Believe You're All Doing Wrong If you're like us, you might sometimes have a problem with complex tasks, like trying to drive an ambulance and send a text message at the same time. But hey, at least most of us have figured out the simplest things that get us through the day, right? Except, you know, some of the simple things we've done every day of our lives, like ... What could be simpler than taking a good crap? Even babies are good at it. The one who just threw up on the other one's shoulder is better at pooping. Chances are the pooping facility nearest you is a sitting toilet, a relatively recent invention that flushed its way into mankind's heart with the advent of indoor plumbing in the 19th century. GettyFuture toilets will exist just to kill us. So how the hell are we meant to do it? Luckily, there's a relatively simple way to end this poop dilemma. In fact, toilets that require you to squat that way have been the standard for most of human history and are still widely used in the non-Western world.

Airplane Travel Tips - 100 Words or Less - Gadling Don't take sleep aids until you're in the air - Airplane tip by Melanie Linn Gutowski (RSS feed) on Aug 9th, 2010 at 11:16AM Though it may seem appealing to sleep through those long waits on the tarmac, avoid the temptation to take a sleep aid until you're up in the air. You may miss important announcements, or, worse yet, you may be asked to disembark and wait for a later plane. If you plan to take a sleep aid, be sure to take a seat where you are less likely to block in other passengers, like a window seat or a middle seat. [Photo: Flickr | mirjoran] Swap shelves in airport bookstores - Airplane tip by Erin Frank (RSS feed) on Aug 9th, 2010 at 10:16AM I've been noticing swap shelves in airport bookstores lately. A few airports, like Portland International, have used bookstores where someone has undoubtedly just sold back that bestseller you wanted, and you can pick it up for less than full price. [Photo: Flickr | jrodmanjr] Wear sunglasses during the flight - Airplane tip by Staci M. Hi.

GardeningPlaces.com - Gardening Directory Gardening Tips - 7 Habits of Successful Gardeners Originally published January 2009 Or is it the Seven Pillars of Horticultural Wisdom? As everyone's resolutions remind us, we love attaching a number to advice, a number smaller than the one I regard as most realistic: The Twenty Three Thousand Four Hundred and Sixty-Two Things It's Important to Remember Before Getting Out of Bed. So be warned: I haven't really honed it down to only seven; these are just the first seven essentials that came to mind when I decided to do this. And not in order, either. Make CompostUse CompostPlant Crops in Wide BedsMulchFeed the Soil, Not the PlantsShare SomethingBe There Photo: The compost bins at Stonecrop Gardens in Cold Spring, N.Y. 1. Short version: Mother Nature never throws anything away. Longer version: Composting is the rare silk purse from sow's ear, something for nothing, win-win. It's easy to fall into thinking that compost's last name is bin, and that careful layering and turning are part of the deal. 2. 3. 4. 5. 6. Got seeds? 7.