Dark Social: We Have the Whole History of the Web Wrong - Alexis C. Madrigal 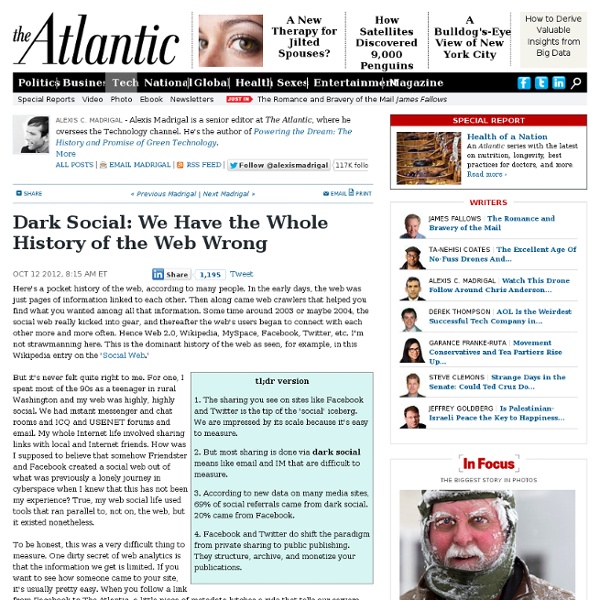 Here's a pocket history of the web, according to many people. In the early days, the web was just pages of information linked to each other. Then along came web crawlers that helped you find what you wanted among all that information. Some time around 2003 or maybe 2004, the social web really kicked into gear, and thereafter the web's users began to connect with each other more and more often. tl;dr version 1. 2. 3. 4. But it's never felt quite right to me. To be honest, this was a very difficult thing to measure. There are circumstances, however, when there is no referrer data. This means that this vast trove of social traffic is essentially invisible to most analytics programs. Nonetheless, the idea that "social networks" and "social media" sites created a social web is pervasive. Everyone else had data to back them up. And then one day, we had a meeting with the real-time web analytics firm, Chartbeat. Just look at that graph. Get this. Related:  Journalism

How the Deep Web Works" Author's Note: How the Deep Web Works The Deep Web is a vague, ambiguous place. But while researching this story, it was easy to conclude at least one thing for sure -- most news headlines tend to sensationalize the dark Web and its seedier side, and rarely mention the untapped potential of the deep Web. Related ArticlesSourcesBagot, Martin.

Social Networking and Ethics First published Fri Aug 3, 2012 In the first decade of the 21st century, new media technologies for social networking such as Facebook, MySpace, Twitter and YouTube began to transform the social, political and informational practices of individuals and institutions across the globe, inviting a philosophical response from the community of applied ethicists and philosophers of technology. While this scholarly response continues to be challenged by the rapidly evolving nature of social networking technologies, the urgent need for attention to this phenomenon is underscored by the fact that it is reshaping how human beings initiate and/or maintain virtually every type of ethically significant social bond or role: friend-to-friend, parent-to-child, co-worker-to co-worker, employer-to-employee, teacher-to-student, neighbor-to-neighbor, seller-to-buyer, and doctor-to-patient, to offer just a partial list. Nor are the ethical implications of these technologies strictly interpersonal. 1. 2. 3.

These 6 Corporations Control 90% Of The Media In America Why Klout matters. A lot. Yes, this is a real invitation. If you hate Klout … and you probably do … try to take a deep breath and read ahead with an open mind. Nothing seems to get rational people in a frenzy as much as Klout and its attempt to measure “influence.” Before I get into why, let’s knock a few obvious facts out of the way: Klout cannot measure every type of influence. Now, for a different perspective. Before the Internet, you had to actually accomplish something to be a celebrity. Even me. In my small world here in Knoxville, Tennessee, USA, I might influence my family, maybe some business colleagues, and that’s about it. Just a few years ago, there is no way you would have heard of Mark Schaefer. So even a nobody like me can become an Influencer. Content is power. The ability to create and move content is the absolute key to online influence. That’s what Klout is trying to do. So an important distinction is that if you’re not on the social web, you’re obviously not being measured.

Hype Cycle Research Methodology Interpreting Technology Hype When new technologies make bold promises, how do you discern the hype from what's commercially viable? And when will such claims pay off, if at all? Gartner Hype Cycles provide a graphic representation of the maturity and adoption of technologies and applications, and how they are potentially relevant to solving real business problems and exploiting new opportunities. Gartner Hype Cycle methodology gives you a view of how a technology or application will evolve over time, providing a sound source of insight to manage its deployment within the context of your specific business goals. Innovation Trigger A potential technology breakthrough kicks things off. PeakExpectations Early publicity produces a number of success stories — often accompanied by scores of failures. Trough of Disillusionment Interest wanes as experiments and implementations fail to deliver. Slope of Enlightenment Plateau of Productivity Mainstream adoption starts to take off.

A Social Publishing Model from Intel: “iQ” inShare120 Guest post by Bryan Rhoads, global content strategy, Intel Today’s web is an endless 24/7 cycle fed by content and social actions. In this cycle, brands are realizing that content is currency and social actions are the transactions in this marketplace for eyeballs and attention. To remain relevant, not only do brands need to produce more interesting, useful and more timely content, they need to adapt to a new “social publishing model” to best feed the social graph and this hungry cycle. I’ve listed two ways below that our brand, Intel, is tackling this content and social publishing challenge. First, we built a new social publishing platform called “iQ” that we use to feed the graph and better integrate our owned and paid media strategies. Secondly, social publishing is a challenge for brands and businesses. At Intel, we are implementing a 3-tiered approach to content production (see “Social Content Tiers” diagram below). Follow @bryanrhoads on Twitter Tags:

St. Paul's School ~ The Pulse of ASP The Pulse of ASP Mass Media Class returns in 2014 In a world of Facebook, Twitter, and Instagram, teenagers often don’t find the time to stay up to date with current events. The ASP Mass Media class is looking to change that by showing that these mediums can help to inform students on local, national, and international news. Master teacher Nate Green brought back the Mass Media course after a one-year hiatus to serve as the pulse of ASP. “I hope this teaches them to use social media in other ways than just tweeting out that they are at the beach or what they ate for breakfast,” says Green, who served as an intern at ASP in 2010. Concord High School senior Hannah Mason confirms Greens thoughts that while teenagers are among the most frequent users of social media, they don’t necessarily use it to keep tabs on world events. “[My generation] fits all of the stereotypes,” explains Mason. The class tracks visits and likes twice a week to gauge the interest level of their audience.

The Makings Of A Great Logo Your company's logo is the foundation of your business branding. It is probably the first interaction that you will have with your customers. An effective logo can establish the right tone and set the proper ethos. 1. Above all design guidelines, the most important criterion is whether the logo reflects the character of the company. Designers should understand the psychology of colors and the effect that typeface has on the design of a great logo. 2. Behind every great logo is a story. 3. How will the logo look in two, 10, 20 years? A good way to test the logo is to let it sit with you for a while before releasing it. 4. A great logo is distinctive, memorable, and recognizable. In addition, if the logo reminds you of others you have seen, it is not distinct enough. 5. When I begin designing a logo, I always start in black and white. A one-color logo also provides the benefit of using your brand easily in multiple mediums with different backgrounds and textures. 6.

Iconosquare - All Instagram online Bill Boyarsky: The New York Times’ Desperate Dive to the Bottom - Bill Boyarsky The motto of The New York Times has long been “All the News That’s Fit to Print.” After reading the Times report on how the paper might survive the digital era, I’m afraid it could be overtaken by a concept called “good enough.” “We must push back against our perfectionist impulses,” the report released last month said. The report, prepared by an internal task force headed by Arthur Gregg Sulzberger, an heir to the paper and formerly assistant metro editor, is called Innovation. In 96 pages, it prescribes drastic surgery to push the paper away from its fixation with print. “... Innovation is a fascinating document. The report reveals how desperate the newspaper is to survive, willing to try anything to prevent the Sulzberger family from losing it, going the way of other former family-owned newspapers such as The Washington Post, The Wall Street Journal and the Los Angeles Times. I lived through such desperation at the L.A. Online remained low on the agenda.

How Three Decades of News Coverage Has Shaped Our View of the World - Uri Friedman Mapping millions of news events makes one thing clear: Some countries are getting a whole lot more press attention than others. Head to the homepages of major news sites today, and you'll get the impression that the bombing near the Iranian embassy in Beirut, the early warnings about HealthCare.gov's technical problems, and the travail's of Toronto's scandal-saturated mayor are among the biggest stories in the world right now. Or are they? Defining what's news, as any editor will tell you, is an inherently subjective exercise, and a new set of charts by the Oxford Internet Institute's Information Geographies blog captures more than three decades of our efforts to do so. The map above shows locations mentioned in news coverage of events between 1979 and 2013, as compiled by the Global Database of Events, Language, and Tone (GDELT). It's a visual that offers some interesting insights about the countries that have dominated headlines since 1979.

10 fascinating facts about Watergate 42 years later On a June 17, 1972, police caught five men breaking into the Democratic National Committee headquarters at the Watergate complex in Washington, D.C. So how did a “third-rate burglary” escalate into a near constitutional crisis? In a two-year period after that fateful June event, growing press coverage of the developing scandal caught the nation’s attention, as President Richard Nixon’s administration clashed with Congress over the details of an extensive cover-up related to the break-in. In late July 1974, the Supreme Court ruled unanimously in United States v. Nixon, that the president had to surrender tapes made within the White House to a special prosecutor. Nixon’s resignation and Gerald Ford’s ascension to the White House completed a complex constitutional drama that involved all three branches of government, along with key agencies like the CIA, FBI and Justice Department. Here are a few of the most-interesting facts about the Watergate scandal as it developed. 1. 2. 3. 4. 5. 6. 7.

Four crowdsourcing lessons from the Guardian’s (spectacular) expenses-scandal experiment Okay, question time: Imagine you’re a major national newspaper whose crosstown archrival has somehow obtained two million pages of explosive documents that outed your country’s biggest political scandal of the decade. They’ve had a team of professional journalists on the job for a month, slamming out a string of blockbuster stories as they find them in their huge stack of secrets. How do you catch up? If you’re the Guardian of London, you wait for the associated public-records dump, shovel it all on your Web site next to a simple feedback interface and enlist more than 20,000 volunteers to help you find the needles in the haystack. Your cost for the operation? Journalism has been crowdsourced before, but it’s the scale of the Guardian’s project — 170,000 documents reviewed in the first 80 hours, thanks to a visitor participation rate of 56 percent — that’s breathtaking. He offered four big lessons: — Your workers are unpaid, so make it fun. How to lure them?