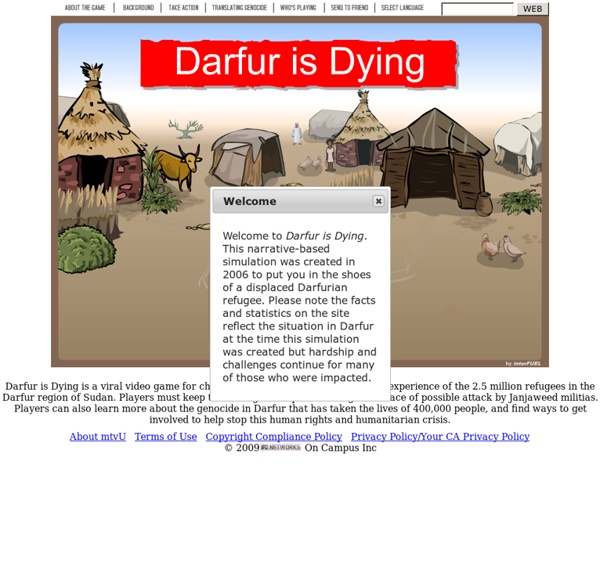 Darfur is Dying is a viral video game for change that provides a window into the experience of the 2.5 million refugees in the Darfur region of Sudan. Players must keep their refugee camp functioning in the face of possible attack by Janjaweed militias. Players can also learn more about the genocide in Darfur that has taken the lives of 400,000 people, and find ways to get involved to help stop this human rights and humanitarian crisis.

The 10 political games everyone should play My Gamesblog column in this week's Technology section deals with the simmering genre of political games. Usually distributed via the internet or virally through emails, these typically short, sharp titles present real-world situations in interactive form, providing users with a unique means of engaging with contemporary issues. Some of them are pretty good fun, too. PROPUBLICA GEN HACK DAY - HOSPITALS Map Data Map data ©2014 Google Patient monitor BEAT THE CENSOR - an illustration of different censoring attempts SCORE: 0000 | Users connected: 000 Why do some countries censor the internet? Frankly we do not know and you would need to ask the respective governments why they are doing it. Where does the data comes from? We use a mashup of data coming from herdict.org and the OpenNet Initiative.

Democracies in the World Democracy means “ruled by the people”. Democracy is a human right. Most countries in the world claim they are democratic, but are they? You can find out here by having a look at the Democracy Map! During the years, many countries have moved from a non-democratic government to a democracy. WeTopia WeTopia, created by Sojo Studios, is an online, Facebook game that allows players to connect with friends, build their virtual city, and spend a unique form of currency called “Joy” that spreads real-world aid to various non-profits around the world. Sojo Studios, a new social enterprise founded by Lincoln Brown, created WeTopia as a way to get everyday people involved with and enjoying acts of philanthropy. A hand-selected team of veteran developers was chosen to lead this ambitious new studio. Along with them are brand partners like Mattel and Clorox, as well as 12 carefully chosen non-profits such as Save the Children, buildOn, and more. The game also launched with substantial media support by the daytime talk show host, Ellen DeGeneres.

My Cotton Picking Life - Game The News How long will you spend picking cotton in this exploration of child labor in Uzbekistan? This game comes originally from a news article on the Guardian website that reported on the scandal of cotton picking by kids in Uzbekistan that are used to make clothes, supplied to people in the west. This is about forced labor – the kids are taken out of school and forced to work: Uzbekistan, one of the world’s largest exporters of cotton, forces adults and children as young as nine to pick cotton under what the charity Anti-Slavery International describes as “appalling conditions”. The kids are given quotas per day to meet (up to 50kg) and if they don’t meet these can be punished. To compound it all, Uzbekistan has an appalling human rights record, according to Human Rights Watch.

Kodu Kodu is a new visual programming language made specifically for creating games. It is designed to be accessible for children and enjoyable for anyone. The programming environment runs on the Xbox, allowing rapid design iteration using only a game controller for input. Conflict Map Lists of Nobel Prizes and Laureates Conflict Map Start the Conflict Map About the map Budget Hero 2.0 Budget Hero seeks to provide a values – and fiscal-based lens for citizens to examine policy debates during this election year. Partisan messages tend to cloud the real issues at play during campaigns, and most candidates are loath to attach detailed financial impacts to solutions which make up their platform. Budget Hero provides an interactive experience involving policy options that have been extensively researched and vetted with non-partisan government and think tank experts to enable players to objectively evaluate candidates.

Serious Games Revolutionizing Music Learning Serious Games teaching kids how to play musical instruments Via: JoyTunes – Music Serious Games For Fun and EducationJoyTunes has just released its educational Serious Game which teaches kids how to play musical instruments by playing a video game. It has been launched as a fun and educational product that introduces a brand new way for children to learn how to play an instrument. Laland - Bernat Fortet Laland Laland: Discovering Lalaxy, is the first videogame for mobile devices in the Laland IP. I was in charge of the production of the game as well as the Game Design and Level Design. Apart from these main roles, and because of such an small team, I was responsible for the art and GUI of the game. I also helped programming the level editor.