Lifeliqe - Digital Science Curriculum & 3D Education Apps. VR Training // Virtual Reality Education - Unimersiv. Google Expeditions Kits AR/VR by Aquila Education. Quick and easy way to find the perfect Google Expeditions tour. Even after a couple of years working with Google Cardboard apps and tools, I am still fascinated with the possibilities of virtual reality as part of the instruction and learning process. 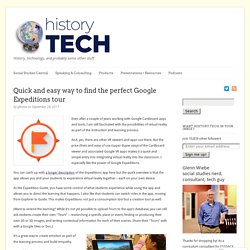 And, yes, there are other VR viewers and apps out there. But the price (free) and ease of use (super duper easy) of the Cardboard viewer and associated Google VR apps makes it a quick and simple entry into integrating virtual reality into the classroom. I especially like the power of Google Expeditions. You can catch up with a longer description of the Expeditions app here but the quick overview is that the app allows you and your students to experience virtual reality together – each on your own device. As the Expedition Guide, you have some control of what students experience while using the app and allows you to direct the learning that happens. (Want to extend the learning? It’s a great way to create emotion as part of the learning process and build empathy. The solution? Like this: Like Loading... Poly. Build Augmented Reality App at Zero coding! Visites. AR VR Edu Hub - VR Apps. AR VR Edu Hub - Merge Cube. 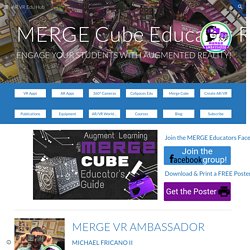 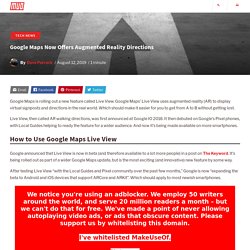 Google Maps’ Live View uses augmented reality (AR) to display virtual signposts and directions in the real world. Which should make it easier for you to get from A to B without getting lost. Live View, then called AR walking directions, was first announced at Google IO 2018. It then debuted on Google’s Pixel phones, with Local Guides helping to ready the feature for a wider audience. How to Use Google Maps Live View Google announced that Live View is now in beta (and therefore available to a lot more people) in a post on The Keyword. After testing Live View “with the Local Guides and Pixel community over the past few months,” Google is now “expanding the beta to Android and iOS devices that support ARCore and ARKit”. We notice you're using an adblocker. I've whitelisted MakeUseOf. Not now. We're giving the ? In a nutshell, Live View displays virtual signs in the real world.

Use HP Reveal (Aurasma) for Book Reviews – Writing on the Wall. I have been playing around with HP Reveal (formerly Auruasma) for a while now in my classroom. 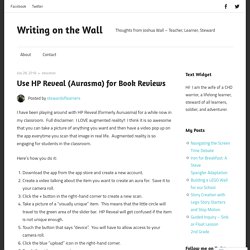 Full disclaimer: I LOVE augmented reality!! I think it is so awesome that you can take a picture of anything you want and then have a video pop up on the app everytime you scan that image in real life. Use HP Reveal (Aurasma) for Book Reviews – Writing on the Wall. Augmented Reality for Education - Assemblr Usecase. Oculus is bringing its Rift and Go VR headsets to classrooms around the world. Although virtual reality may be experiencing slow adoption in the consumer market, one area where it seems to have truly untapped potential is in the classroom where virtual worlds could help students visualize and learn about history, science, and culture in an unprecedented fashion. 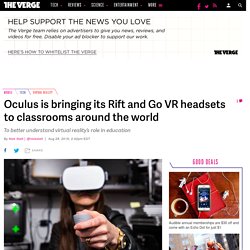 To capitalize on VR’s increasingly instrumental role in visual education, Facebook-owned Oculus VR announced today that it’s distributing a number of its tethered, high-powered Rift headsets and standalone Go headsets to education institutes around the world, starting with Seattle, Taiwan, and Japan. The Top 10 Educational VR Apps of 2018. 2018 has been a great year for immersive technology in education. From the launch of the affordable Oculus Go headset to the transition of the Merge Cube from toy to educational tool to the plethora of ARkit and ARcore enabled experiences that launched on mobile devices, there has been a wealth of opportunities for educators around the world to begin integrating AR and VR in classrooms like never before. Whilst mobile developers seem to be focusing more squarely on AR-enabled content, there have been some stellar virtual reality experiences released for the Vive, Rift and even WMR headsets.

I actually produced a “Best of the Year” list last year (which you can find on my site www.virtualiteach.com) but I specifically focused on educational apps for the Vive. For this year’s list, I’m expanding the range to include other platforms as some excellent content has launched outside of the Steam VR Store. Honourable Mentions 1. 2. 10 Oculus Go Virtual Reality Apps to Try in the Classroom. The day the Oculus Go was released in May, I rushed to Best Buy to get the virtual reality device, which is owned by Facebook, before they sold out.

To my surprise, the staff had no idea what I was describing. Fortunately, I was able to find it at the customer service desk, and I was the first customer to purchase it at that store. Currently, there are two purchase options available: the Oculus Go with 32 GB of storage at $199 or 64 GB of storage at $249. 10 Oculus Go Virtual Reality Apps to Try in the Classroom. How To Sideload Apps And Games On Oculus Quest Or Oculus Go. Oculus Go or Mobile VR for Education? Our advice for VR hardware - Google Slides. Why we don't recommend Oculus Go for schools. Oculus Rift S vs Oculus Quest vs Oculus Go vs Samsung Gear VR. There are now a few different choices for those looking to get into virtual reality with a number of VR headsets available at varying prices. 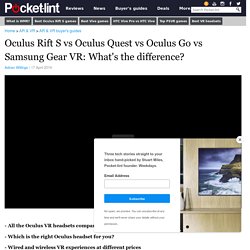 At one end of the spectrum that are headsets that use compatible mobile devices for their VR content while at the other end sits the high-end devices that require a powerful gaming computer to run. Oculus offers several different VR headsets including the Oculus Go, the Oculus Quest, the Oculus Rift and the flagship Oculus Rift S. The Oculus Rift was the company's flagship VR device, but that's now being replaced by the Oculus Rift S.

This is a powerful virtual reality headset that needs a PC to run, while some of the other devices offer a wire-free VR experience. But what's the difference between them? Squirrel_widget_144317 Pocket-lint Each of these virtual reality headsets offers slightly different design features that make them stand apart. The Samsung Gear VR is a headset that's primarily powered by a smartphone. VRFocus – The Reality of Virtual Reality. Here Is What the Right Tools for Mixed Reality in the Classroom Look Like. In K–12, educators have found ways to use augmented and virtual reality to enhance and support deeper learning in the classroom. 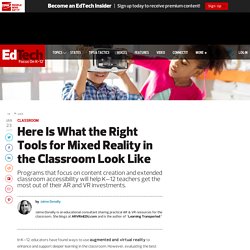 However, evaluating the best immersive technology resources requires an understanding of current technology limitations and offerings. The future looks promising as educational technology companies rapidly build new immersive tools for the classroom. Conversely, some educators may find that the massive influx of resources makes the selection process confusing. Studio. Deepen student learning with AR. 10 Oculus Go Virtual Reality Apps to Try in the Classroom. 5 VR Projects for Students. Google's VR Tour Creator is one of my favorite media creation tools. 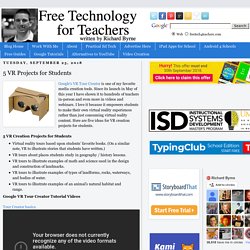 Since its launch in May of this year I have shown it to hundreds of teachers in-person and even more in videos and webinars. I love it because it empowers students to make their own virtual reality experiences rather than just consuming virtual reality content. Here are five ideas for VR creation projects for students. 5 VR Creation Projects for Students Virtual reality tours based upon students’ favorite books. Tour Creator basics. Learn more about how to use VR tours in social studies by taking my online course, Teaching History With Technology. Virtual Field Trip Apps and Websites. 4 Ways to Use Augmented and Virtual Reality Apps in the Classroom. Are you curious about using augmented or virtual reality in your classroom? If you've already tried it out, are you looking for more app and lesson plan ideas?

Either way, we've got you covered. Start with the Google Cardboard headset (it's only $15), and whether you're using iOS, Android, Chromebooks, or iPads, we've curated an assortment of apps and lesson plans to try out with your students. Keep in mind there are ongoing debates around using virtual reality with kids. What the Research Says About VR in Classrooms. While we've been inundated over the past few years with the promises and potentials of virtual reality (VR), it's been tough to slice through the hype to find facts, especially the kind of trustworthy research on VR adoption, effects, and learning potential educators need. 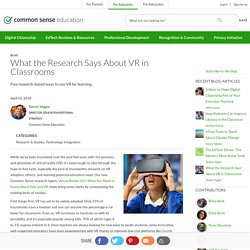 Our new Common Sense research report, Virtual Reality 101: What You Need to Know About Kids and VR, helps bring some clarity by summarizing the existing body of studies. First things first, VR has yet to be widely adopted. Only 21% of households have a headset and one can assume this percentage is far lower for classrooms. Even so, VR continues to fascinate us with its possibility, and it's especially popular among kids, 70% of whom (ages 8 to 15) express interest in it. Quests. Getting StartedOur quests are shared via a viewable Google Drive folder. 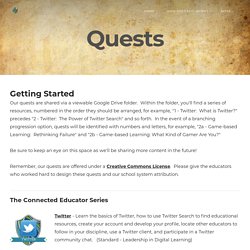 Within the folder, you'll find a series of resources, numbered in the order they should be arranged, for example, "1 - Twitter: What is Twitter? " precedes "2 - Twitter: The Power of Twitter Search" and so forth. In the event of a branching progression option, quests will be identified with numbers and letters, for example, "2a - Game-based Learning: Rethinking Failure" and "2b - Game-based Learning: What Kind of Gamer Are You? "Be sure to keep an eye on this space as we'll be sharing more content in the future!​

Metaverse Breakouts - Google Sheets. Metaverse - Create Amazing Things. VirtualiTeach. Augmented Reality vs. Virtual Reality. 12 augmented reality apps students can use today. Augmented reality–a technology that uses a trigger image to superimpose digital content over a user’s view of the real world–is growing in popularity and accessibility, and it holds a wealth of potential for education.

Often described as “QR codes on steroids,” the technology offers new and exciting ways for students to interact with lessons, said Jeff Peterson, an instructional technologist in the Lamar Consolidated ISD in Texas. The Augmented Reality for Education Shelf. Integration of AR. Meaningful Integration of Augmented Reality in Education Below you will find a list of ideas and apps to help meaningfully integrate augmented reality into education. This list will continue to grow as we collaborate with amazing educators on game changing ideas! Homework Mini-Lessons: Grade Level: All grades We use Explain Everything for many activities in our classrooms.

Grade Level: PK-2, ELL This app uses augmented reality to engage the students in learning their letters. An Open Valve: How a Modding Community Shaped the Future of Virtual Reality. Read articles from the magazine right here on Make:. Getting Started with Virtual Reality: Building for Google Cardboard. Exploring Augmented Reality with Vuforia and Unity.

It has always been a dream of mine to play with the holograms from Star Wars. While that dream may still be a long ways down the line, there is some supplemental hope for my space fantasy. A company called Qualcomm has released a technology called Vuforia, which among many other applications, can help you play with a concept called augmented reality. Getting Started with Virtual Reality: An Introduction to Unity. The Maker community is an extraordinary bunch filled with wild ideas and potential, limited only by the capabilities of the components they can get their hands on — but what if I told you there were worlds you could have complete control over? They’re out there, and over the next few years we’ll see their populations and influences explode. Sculpting 3D Printable Items in Virtual Reality with Oculus Medium.