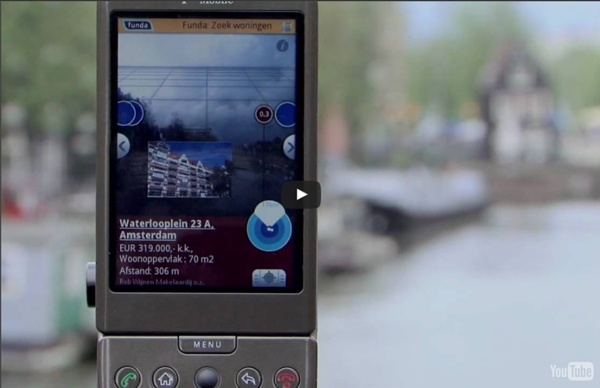 SceneTap's cameras tell you how many boys and girls are at the bar SceneTap is launching soon for iPhone and Android, focusing on providing up-to-date information about what’s going on in local bars. The usual stuff like menus, deals, reviews, search, and marking favourites are all there, but that’s not the most interesting part of this social network. Starting in Chicago, SceneTap will be installing cameras in participating locations, and thanks to facial recognition, they’re counting how many people are at these bars and if they’re men or women. That information is shunted out to the app so you can see which places are a good place to go to on a Friday night, and if the male-to-female ratio works in your favour. You can filter bar search results based on this data too, so you can pick places based on age range of patrons, distance from your current location, and other criteria. About The Author Simon Sage Sell Your Old Cell Phone for Cash Buy a New Cell Phone

10 Amazing Augmented Reality iPhone Apps While Lawnmower Man may have led us to believe the future was a virtual one, it seems that in fact augmented reality (the overlaying of digital data on the real world) is where we're headed. A buzz technology right now, augmented reality apps are quickly gaining momentum on the iPhone. So to add to the quick overview of six AR apps we brought you earlier, we sort the digital wheat from the pixellated chaff to bring you ten AR apps for the iPhone that vary from functional, to educational, to just plain fun. 1. Although the wisdom of getting drunk people to wave their iPhones around on today's mean streets is questionable, if you drink responsibly, as this Stella Artois-backed app urges you to, this could be a handy tool. 2. Another corporate-backed app, this time by Plantronics, is WorkSnug, an iPhone app that finds digital nomads a place to lay their weary laptop. 3. This star map app will spell out the stars, planets and constellations for you. 4. 5. 6. 7. 8. 9. 10. iPew

Layar Reality Browser / FrontPage Welcome to the Layar Developer Wiki! Sign up to be a layer developer at layar website ( Read API Documentation in the sidebar to get familiar with API technical details. Create your layer on the publishing site. Check Tutorials to see how to build a simple layer. 22/12/2011: Updated the public IP range of Layar server. 15/12/2011: Updated the documentation of Layar Publishing API (Layar Connect) v2.0. 08/12/2011: Added more guidelines and instructions on how to use the Layar Vision Search logo for your vision layer. 05/12/2011: Added a step by step tutorial on how to integrate iPhone Player SDK into a simple iPhone app. 16/11/2011: Released 3d model converter v3.0.1 with bug fixes and updated command line tool. 11/11/2011: Fixed and improved the Tutorial sample codes. 11/11/2011: Updated the Layar Vision logos, please use these to indicate Layar Vision usage on target objects, such as posters, magazines, etc.

Finding your face anywhere on the internet It was perhaps inevitable that, in the week following Eric Schmidt's comments to the Wall Street Journal, a new piece of technology would arrive that would further emphasise the dangers of placing your entire life online. With Facebook having handily announced the launch of 'Places' in the US towards the end of last week; now a new application has emerged that scans your face, then the internet, to find every image of you available online. As the Daily Mail explains: As with last week's wrangles, ultimately we have to take a degree of personal responsibility for our online identities and how much we place on the internet. It is always dangerous calling for regulation with cases such as this, so our only advice is to work out how to heighten your privacy settings, educate your children and don't put anything on the internet you wouldn't show to your boss (or perhaps your Grandmother)! By Dylan Sharpe

Augmented Reality Simply Explained for Students June 18, 2014 The integration of Augmented Reality technology into learning is growing by leaps and bounds. The potential of this technology in education is uncontestedly huge and several classes now are using it to teach key literacy and mathematical concepts to students. This series of videos is an example of how students in primary are using augmented reality in their learning. Augmented reality should not be confused with virtual reality, for the boundaries of each concept are clearly demarcated. While virtual reality denotes a reality that exists only in the virtual world (online), augmented reality, on the other hand, keeps the real world but only adds a digital layer to it. or amplifies it. In other words, augmented reality gives you actual information without changing or displacing the real world you are experiencing. I have already shared some interesting resources on augmented reality tips, tools, and apps to use in your class with students.

Privacy Invasive Devices Faster than privacy by design, privacy invasive tools are designed. Recently in the news: After Eric Schmidt’s comments on privacy / change of name, the ‘Finding your face anywhere on the internet‘ software allows you to be identified. I had blogged previously about targeted advertising using cameras in public places to deliver specific advertisement adapted to the ‘face’ of the pedestrians. Other software exists that can geographically locate people from pictures by analysing the picture background etc… Smartphone, or other GPS-enabled digital pictures, are another way of geo-locating. Following the recent Facebook changes, Tech Crunch is asking: ‘Your Facebook Friends Are Watching You—Did We Just Move Closer to 1984?“On the New Yor Times:‘Web Photos That Reveal Secrets, Like Where You Live’ On TechFlash this time, William Carleton questions ‘The future of privacy law in the era of Foursquare and check-ins‘ As if simply geo-locating was not enough, here comes “geofencing“. Like this:

Augmented Reality Brings New Dimensions to Learning Editor's Note: Drew Minock, who co-wrote this piece, is an elementary teacher, co-founder of the popular education blog Two Guys and Some IPads, and is one of the voices on "The Two Guys Show" podcast. Imagine living in the magical world of Harry Potter, where the school hallways are lined with paintings that are alive and interactive. Now imagine creating an atmosphere like that for your students. Augmented Reality (AR) allows educators and students to do just that: unlock or create layers of digital information on top of the physical world that can be viewed through an Android or iOS device. Most people who interact with AR for the first time have a mind-blowing experience but fail to consider classroom applications. In our elementary school classrooms, we use AR to create active learning experiences hitherto inconceivable, and in the process redefine the learning space! Classroom Applications Not Just Another Fad There are endless ideas and possibilities for using AR.

8 Weird Ways People Are Using Facial Recognition Software Once in a while, it's nice to be able to blend into the crowd, especially for those who could use a break from being constantly digitally connected. But even away from the computer, it seems, we can't escape our digital personas (and not only when prospective employers stumble into embarrassing online photos). "People are losing control of their own information," Ginger McCall, the Open Government Counsel for the Electronic Privacy Information Center says. Using currently available facial recognition technology, Alessandro Acquisti of Carnegie Mellon University has shown that he can link people (in this case, student volunteers) to their Facebook profiles within 3 seconds, just by photographing their face. The demonstration involved only a finite population at the university, and it took some skill to pull together the technologies. Facial recognition software isn't just for law enforcement, either.

AR Flashcards 2.0 IS Here And It's FREE! | AR Flashcards Welcome to a new world of Flashcards. AR Flashcards make learning fun with the technology of Augmented Reality! “It’s definitely unique and a very clever way to get children involved in learning the alphabet and animal names.” – TheiPhoneMom.com “Through the use of augmented reality (AR) and flashcards – this app allows your children to learn in a new and exciting way! “My daughter was repeating the letters and animal names and I could tell that she was learning a lot from this app, which of course is what is most important to me as a parent.” – MidwesternMoms.com “Children will love playing around with the cards and animals while learning the letters of the alphabet.” – Appysmarts.com “I absolutely love this unique twist on flashcards. AR Flashcards are a new way to interact and make Flashcards more entertaining for toddlers and preschoolers. Features: - 26 beautifully rendered Animals to help your toddler or preschooler learn the alphabet! - 6 beautifully rendered Dinosaurs!

The Future Of Advertising Is Facial Recognition If Rana el Kaliouby has her way, you will never have to channel surf again. Affectiva, the company that el Kaliouby founded with MIT colleague Rosalind Picard, develops technology that reads minute facial expressions to measure emotion. A television equipped with a webcam and Affectiva's technology could determine which shows you like to watch, given your past emotional reactions to them, and program your television accordingly. Affectiva's facial-reading software, Affdex, is already being used by major advertisers, including Unilever and Coca-Cola, that previously depended on focus groups and surveys to test ads. Since its launch in 2011, Affdex has helped measure audience sentiments for several high-profile events, including the 2012 U.S. presidential debates and this year's Super Bowl. "Affectiva is doing something radically different with data. Originally, Affectiva's technology was developed for a far different purpose.

Meaningful Integration of AR Meaningful Integration of Augmented Reality in Education Below you will find a list of ideas and apps to help meaningfully integrate augmented reality into education. This list will continue to grow as we collaborate with amazing educators on game changing ideas! Homework Mini-Lessons: Grade Level: All grades We use Explain Everything for many activities in our classrooms. Grade Level: PK-2, ELL This app uses augmented reality to engage the students in learning their letters. Grade Level: K-3 This fun app uses augmented reality to engage students in solving addition and subtraction problems. Student created book reviews: Grade Level: All grades Students can create short video book reviews of the book they have read from the classroom library or school library. Faculty Photo Wall Personalize your school's entryway by hanging a photograph of each staff member. PTA Support/Recruiting Rubrics Grade: All Learning Targets: Exit Slips/Tickets Words of Encouragement Mystery Reader or Staff Members Yearbook!