The Many Benefits of Hydrogen Peroxide By Dr. David G. Williams 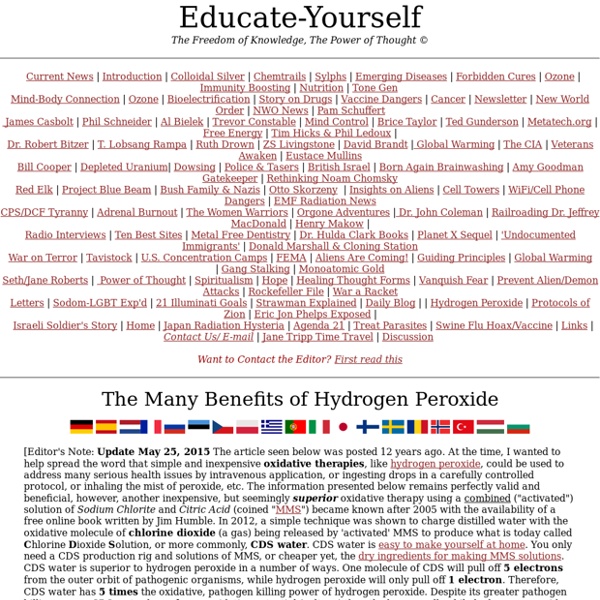 26 Amazing Benefits and Uses for Hydrogen Peroxide By Andrea Harper Guest Writer for Wake Up World Hydrogen peroxide (H2O2) is the only germicidal agent composed only of water and oxygen. ******** The DarkStar ********: The One Minute Cure Part 2 - The Secret to Healing Virtually All Diseases! and get healthy on your own! Gee...what a novel concept!One Minute Cure, Part 2 I posted an article on JediTheOne Blog on June 24th, 2009 called “The One Minute”. I know that some people read the information. I even found the information posted on another fellow blogger’s site because of being impressed with the information.

Fermented Food for Beginners: Lacto-Fermented Vegetables This is part 3 in a four part series. I renamed this series Fermented Food for Beginners in the hopes that it will encourage anyone who was intimidated about making their own ferments, as I was. Before the advent of modern day canning most of our American fore mothers understood the process of lacto-fermentation. They had crocks of real sauerkraut, lacto-fermented cucumber pickles and other treasures such as beets, onions or garlic waiting out the winter in the root cellar. Food Grade Hydrogen Peroxide Everything you ever wanted to know about Food Grade Hydrogen Peroxide,but didn’t know who to ask... For centuries, people who have worked in the health sciences have been seeking to identify the primary biochemical cause of all disease, and the cure-all that thisbasic principle would yield. The cause and the cure have been found, but their utter simplicity makes them difficult to accept at first. It seems that if it’s really that simple, we should have discovered it ages ago and we should have been using it all along.

Pitfalls in Regulating Physicians. Part 1 I had intended today’s posting to be a summary of a real case faced by a state medical board. It is a case of licensed physicians treating patients with a substandard, dangerous, and unequivocally illegal method. My intent was to use it as an illustration of how difficult it can be for medical boards to discipline such practitioners, even when the treatment involved is obviously, blatantly bad. Only yesterday, I was informed by the pertinent board that because this case has yet to be resolved, I may not discuss it. So be it: I’ll save the specifics for another time. Comparing Salt, Whey and Starter Cultures for Fermenting Vegetables, Fruits and Condiments When making naturally cultured vegetables, fruits or condiments, recipes will often call for a variety of ingredients including salt, whey and salt, or even just a freeze-dried culture. How do you choose the best culturing medium for your project? Purpose of Salt and Starter Cultures Salt can promote the fermenting process by inhibiting the growth of undesirable microorganisms, favoring the growth of desired Lactobacilli.

Self-Treatment for AIDS, Oxygen Therapies, Etc. (book excerpt) An excerpt from the book SELF-TREATMENT FOR AIDS, OXYGEN THERAPIES, ETC. edited by Betsy Russell-Manning Softcover, 1989 ISBN #09301618 from pages 19 - 27 TESTIMONIAL EXCERPT OF LETTER from Dr. Charles Farr, M.D. Ph.D. regarding intra-arterial and intravenous use of Hydrogen Peroxide My work with hydrogen peroxide is very exciting to me and I feel it will prove to be a great contribution to mankind eventually. The therapeutic benefits we are documenting are very remarkable and we have just started the discovery process. As you are already aware, H202 is a natural biochemical product of body metabolism and is a vital part of our first line defense system. It oxidizes toxins, kills bacteria, stops viruses, stimulates immunity and many things yet undiscovered.