Heal Yourself At Home. How to ApplyH2O2therapy •Supplement H2O2 therapy with Antioxidants •Which kind of H2O2 should I use? 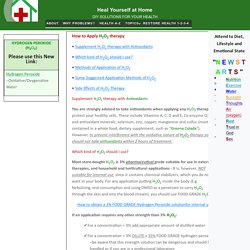 •Methods of Application of H2O2 •Some Suggested Application Methods of H2O2 •Side Effects of H2O2 Therapy SupplementH2O2therapy with Antioxidants You are strongly advised to take antioxidants when applying any H2O2therapy - to protect your healthy cells. Which kind of H2O2 should I use? Most store-bought H2O2 is 3% pharmaceutical grade suitable for use in external therapies, and household and horticultural applications - It is, however, NOT suitable for internal use, since it contains chemical stabilizers, which you do not want in your body.

o3Vets. Genel Ozonoterapy in medicine use. 26 Amazing Benefits and Uses for Hydrogen Peroxide - Sunfood. Docakilah.files.wordpress.com Hydrogen peroxide is the only germicidal agent composed only of water and oxygen. 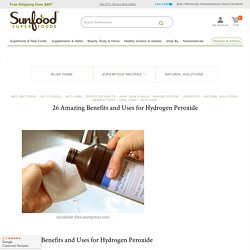 Like ozone, it kills disease organisms by oxidation! Hydrogen peroxide is considered the worlds safest all natural effective sanitizer. It kills microorganisms by oxidizing them, which can be best described as a controlled burning process. When hydrogen peroxide reacts with organic material it breaks down into oxygen and water. Whiten Clothes – An Alternative to BleachAdd a cup of Peroxide to white clothes in your laundry to whiten them. Health:Your body makes hydrogen peroxide to fight infection which must be present for our immune system to function correctly. Rejuvenating Detoxifying Bath:Use about 2 quarts 3% hydrogen peroxide to a tub of warm water. 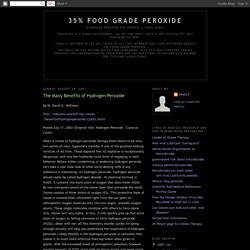 Pitfalls in Regulating Physicians. Part 1. I had intended today’s posting to be a summary of a real case faced by a state medical board. 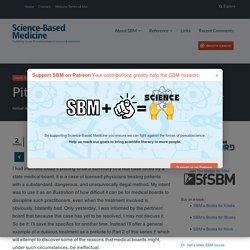 It is a case of licensed physicians treating patients with a substandard, dangerous, and unequivocally illegal method. My intent was to use it as an illustration of how difficult it can be for medical boards to discipline such practitioners, even when the treatment involved is obviously, blatantly bad. Only yesterday, I was informed by the pertinent board that because this case has yet to be resolved, I may not discuss it. So be it: I’ll save the specifics for another time. Instead I’ll offer a general example of a dubious treatment as a prelude to Part 2 of this series,† which will attempt to discover some of the reasons that medical boards might, under such circumstances, be ineffectual. ******** The DarkStar ********: The One Minute Cure Part 2 - The Secret to Healing Virtually All Diseases! And get healthy on your own! 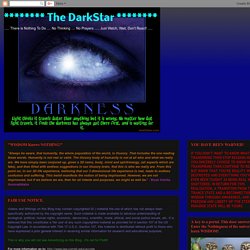 Gee...what a novel concept! One Minute Cure, Part 2 I posted an article on JediTheOne Blog on June 24th, 2009 called “The One Minute”. I know that some people read the information. I even found the information posted on another fellow blogger’s site because of being impressed with the information. This discussion, again, is about Oxidative Therapy which uses either Ozone (O3) or Food Grade Hydrogen Peroxide (H2O2). There’s a Chinese proverb which says: “The superior doctor prevents illness.”

According to the above definition, traditional (allopathic) doctors are either mediocre or inferior! Keep in mind, OXYGEN is the most essential element in the human body. The Many Benefits of Hydrogen Peroxide By Dr. David G. Williams. "The One Minute Cure For All Diseases" Self-Treatment for AIDS, Oxygen Therapies, Etc. (book excerpt) An excerpt from the book SELF-TREATMENT FOR AIDS, OXYGEN THERAPIES, ETC. edited by Betsy Russell-Manning Softcover, 1989 ISBN #09301618 from pages 19 - 27 TESTIMONIAL EXCERPT OF LETTER from Dr. 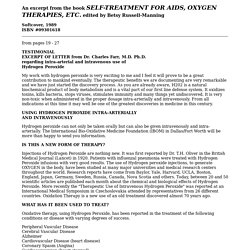 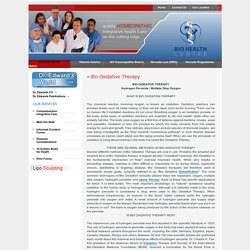 Oxidation reactions can proceed slowly, such as metal rusting, or they can be rapid, such as fire burning. There can be no human life if oxidation reactions do not occur. Oxytherapy.com - Cancer Cured by Hyper-Oxygenation. Note: This is a mirrored site: the original site is gone AIDS, Cancer Cured By Hyper-Oxygenation (Waves Forest) Several dozen AIDS patients have not only reversed their death sentences, but are now back at work, completely free of the disease. 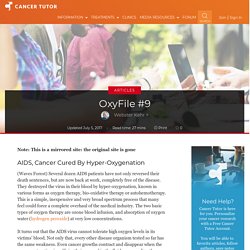 They destroyed the virus in their blood by hyper-oxygenation, known in various forms as oxygen therapy, bio-oxidative therapy or autohemotherapy. This is a simple, inexpensive and very broad spectrum process that many feel could force a complete overhaul of the medical industry. The two basic types of oxygen therapy are ozone blood infusion, and absorption of oxygen water (hydrogen peroxide) at very low concentrations. It turns out that the AIDS virus cannot tolerate high oxygen levels in its victims' blood. AIDS, herpes, hepatitis, Epstein Barr, cytomegalovirus and other lipid envelope virus are readily destroyed by hyper-oxygenating the patients blood with ozone.