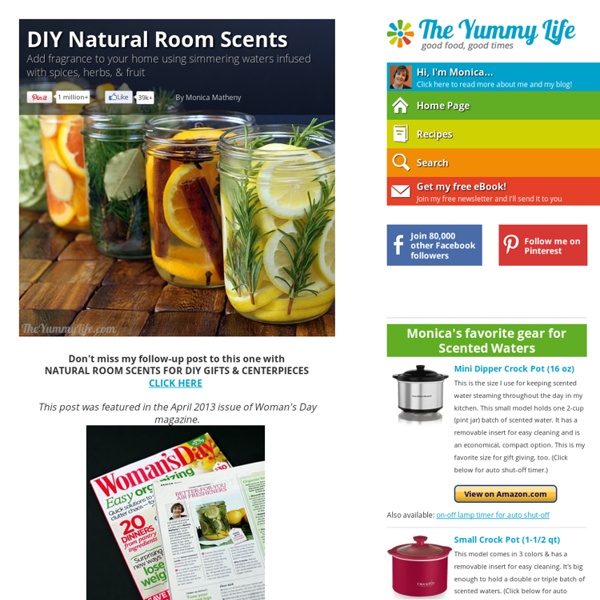 Don't miss my follow-up post to this one withNATURAL ROOM SCENTS FOR DIY GIFTS & CENTERPIECESCLICK HERE This post was featured in the April 2013 issue of Woman's Day magazine. Here's the thing. I'm married to a man who hates artificial scents of any kind. That goes for air fresheners, candles, perfume, soaps and anything else that is scented. We buy unscented everything. Turns out that King-Man may just be ahead of his time. But, the air in my house gets stale sometimes. There is a simple, all natural, truly lovely solution. Keeping the supply list simple. How to Make Natural Room Scents Fragrant items for naturally scenting your home: citrus -- I've tried other fruits. view whole spices on Amazon: cinnamon sticks, anise stars, allspice, cloves, vanilla beans Five Natural Room Scent RecipesThese are all scents that my nose likes. General procedure: Combine the ingredients in a 2 cup (pint) jar or container, or in a pan on the stove top. view on Amazon: ♦pint jars ♦plastic lids for jars 1.

Types of Houseplants That Clean Indoor Air Why invest in expensive electrical air purifiers when you could purchase a few types of houseplants to clean and filter the air naturally and inexpensively? Much of the research on these beneficial houseplants has been done by NASA scientists researching ways to create suitable space station habitats. All indoors plants (flowering or not) are able to purify indoor air to some degree through their normal photosynthesis processes. But some were found to be more beneficial than others in removing harmful household toxins, even removing 90% of chemicals in the air in only twenty-four hours! The three main household toxins of concern are: benzene formaldahydetrichloroethylene

The Gold Jellybean Yesterday Sydney and I had a major art and craft day, and also experimented with making glow jars. They have been floating around Pinterest for awhile now and look like so much fun! However, there is one tutorial that frustrates me. The image is clearly Photoshopped, and I think it’s very misleading. So, I decided to make a couple of our own jars so we can share our experience and method with you. I must admit, frustration aside, I was intrigued with the photoshopped glow jar image, it’s actually called fairies in a jar, and I wanted to try and replicate the glowing ‘fairies’ that appear to be suspended in mid-air.

What do to with your favorite photos — by Guest Mom Amy M Being a photographer is one of the things I love most. Catching the details of my life has become something I can’t live without. I enjoy looking through each photograph and savoring each memory that is tied to it, but I am always faced with the tough question, what should I do with my photos now? Here are some of my favorite ideas. Since I really enjoy scrapbooking my photos are most often then not used for that purpose, but then they are stuck in albums and not seen very often (if they get scrapbooked at all which seems to be the case as of late), so something I’ve done is frame the layouts so they can be enjoyed by all.

DIY Patio Lights I've done a few posts already featuring different DIY lighting projects, but this one is a little different. It's EASY. Like, no tools required WHATSOEVER. I give you: Making Your Own Natural Air Freshener and Oil Diffuser May 10, 2013 by EDITOR Making Your Own Natural Air Freshener and Oil Diffuser The number of home fragrance products available today is staggering. * Maria's Self *: DIY Toilet Bombs - Deodorize & Kill Bacteria! Just Drop One in the Bowl;-))) Remember I told you in my previous post that the next product in my store will be an "outside the box" one? Well, you've been warned;-))) I came up with the idea of Toilet Bombs a few months ago. At first I thought it would be embarrassing to make a post about them but I fell so much in love with these toilet bombs that I just HAD to share the idea with you - I'm seriously addicted! When I drop them in the toilet bowl they start fizzing (= exploding;-) and not only do they smell amazing they also deodorize, kill the bacteria (including the odor-causing ones!) and keep the bowl clean.

Burlap & Wood Love Frame Collage I've been imagining this one for a while now and am happy to be able to finally show it off! The inspiration came from all of the different collage frames and frame gallery walls that seem to be everywhere lately. After a trip to Goodwill and $4 later I was well on my way to starting my frame collage. I had black primer and black spray paint on hand already, so I gave the mismatched frames a couple coats of each. Much to my dismay, when I asked my husband for help gluing the frames together, he told me I should've glued them before painting them. Apparently wood glue doesn't adhere to paint very well.

12 Unusual Ways to Use Sugar (Without Eating It!) Just because sugar isn’t a recommended part of your diet doesn’t mean it is entirely useless. Sugar has plenty of uses outside of the kitchen. From reducing pain to fueling a car, sugar is a cheap and effective alternative to many cleaning and toiletry items. So, while it may be sweet in taste, the grainy powder is an effective household and beauty remedy that gets the job done without derailing your diet.

Homemade Serenity By now you're probably all familiar with my new found affinity for Meyer Lemons. I only discovered them this winter, and I've been shaking my head every time I use one, wondering why I didn't know about them before. Meyer Lemons are thought to be a cross between a true lemon and an orange.