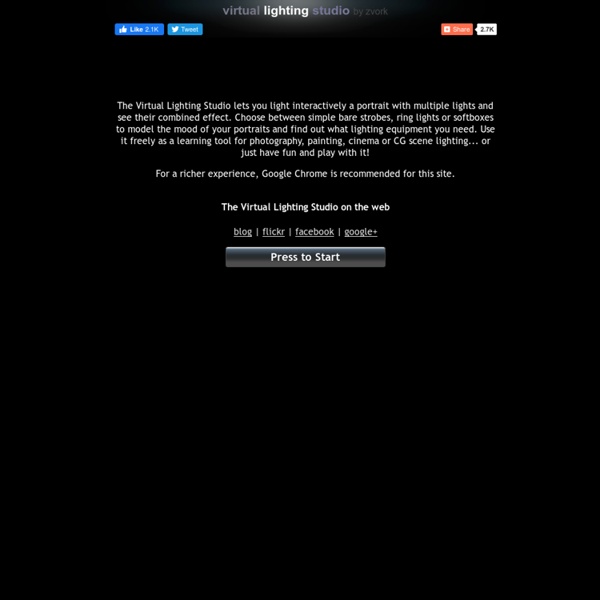 The ambient light represents the light coming from the studio environment. You can turn it on or off and change its color and intensity. If you're lost and need some help, click here. But you probably know that... Click on any help text to hide this. This is a schematic view of the studio. These are all the available models for lighting. These slots are used to capture your light setups. You can save a picture of your capture on your device by using the "Save As..." command of your browser on the capture thumbnails. This button is used to share or bookmark your current settings. This is the main view which displays your lit subject as seen through your camera. The garbage is used to clear your captured light setups. Here you can turn on or off your lights. The solo button enables you to temporarily visualize the effect of a single light in your setup. A gel can be added on a light to change the light color. This displays the intensity of the light.

12 Things You Didn't Know Your DSLR Could Do Your digital SLR (even if it’s a budget “entry-level” model) is a picture-making powerhouse. And sure, you know all about the still and video capture, burst shooting, tracking autofocus, and smart metering. But your camera likely has additional capabilities you may not know about—features that can improve your photos and make for a more enjoyable shooting experience. Crimes of fashion: gangsters turn heads again FASHION loves a bad boy and they don't come much rougher than Sidney Kelly, a well-dressed career criminal who cut a swath through Sydney's demimonde in the 1920s. The last time Kelly sat for a formal portrait, a representative of the NSW constabulary was holding the camera. His picture is one of more than 130,000 collected in the forensic photography archives of the Justice & Police Museum. Designer Ralph Lauren has chosen some strange muses for his latest collection - Australian criminals from the 1920s. Now Kelly is turning heads again, this time in New York and London, as the unlikely muse for designer Ralph Lauren's latest menswear campaign. The billionaire American has purchased the rights to a series of police mugshots of Kelly and other Sydney thugs, conmen and criminals to adorn his flagship stores in New York and London and help inspire a new advertising campaign.

The Recipe for Writing Success? Kill Your Characters Ok aspiring fiction writers, if you’ve ever wondered how to write a successful novel, the secret is here: kill off your characters. Of the handful of books that won the prestigious Man Booker Prize in 2011, all 13 novels had the common theme of putting to death main characters… it’s a lot like the plot of Will Ferrell’s Stranger Than Fiction… everyone knows the story won’t be as good without a solid death. This beautiful graphic designed by the literary heavy “slow journalism magazine” Delayed Gratification, traces the dominant themes from last years winners, showing that not just a few, but ALL the winners featured overriding themes of death. What followed that? In distant second we have themes about love and then betrayal… both subjects that can get the blood boiling, but obviously don’t guarantee a win. Oh, and don’t forget some of the less popular plots about escaped tigers, nanny trust issues and homicidal cowboy brothers.

Strobist: Lighting 101 - Understanding Your Flash (Photo by Strobist reader GreggBK) So let's talk about the basic gear you'll need to learn how to light, beginning with your flash. Generally, most people at this point will have a DSLR, a lens or two and a typical flash. (I.e., the removable kind that mounts to the top of your camera, not the built-in pop-up kind.) If so, you have already bought the expensive stuff. The gear to use that flash off-camera is surprisingly, refreshingly cheap. The Most Awesome Box Art In The World They may be known as Studio Liverpool today, but there once was a time British developers Psygnosis were responsible for the greatest video game covers of all time. From the mid-80s to the mid-90s, the team responsible for games like Lemmings, Shadow of the Beast and Barbarian (and who would later go on to create the Wipeout series on the PlayStation) broke from the infantile and/or boring styles preferred by other companies and went for a look that was part Heavy Metal, part Moebius and all brilliant. Things began to get a little more tame as the 90s dragged on, with fantastical art going out of style and Psygnosis moving away from home computer development and towards consoles, but for just under a decade, they were kings.

21 Sample Poses to Get You Started with Photographing Female Subjects This is the first in a series of Posing Guide posts by Kaspars Grinvalds from Posing App See below for links to the full series of posing guides including for kids, men, couples, weddings and more. Check out our new Portrait Posing eBook and Portrait Posing Printables for more advice and posing ideas. If you ever run out of ideas, get stuck in creativity or simply need some guidance when shooting female subjects, you may use following posing samples as a “posing cheat sheet”. Many pro photographers use such a technique when preparing for and during the photo shoot. The poses in this article are selected as initial reference. I would advise to look at the poses together with your subject, especially if she’s inexperienced.

bodies-in-motion - scott-eaton.com 30 second sequences from BiM Not long ago, I had twelve artists from Natural Motion (of Morpheme and Clumsy Ninja fame) into Somerset House, my home away from home, for a four day anatomy workshop. At the end of each day we would take about 20 minutes to draw from the Bodies in Motion library. sketching from BiM We made extensive use of the timer for gesture drawing. Volunteering Offers a Way to Explore Career Fields A. Public service work for organizations like AmeriCorps, Teach for America or the Peace Corps can be a gateway to a variety of careers, including those outside public service. Some organizations provide a stipend or salary, although the benefit of public service is not money — it is the time it allows new graduates to consider their options and learn about themselves, says Roberta Cross, director of career services at Washington and Jefferson College in Washington, Pa.

pies of Bargue Drawings The links below will take you to detailed decriptions of my personal experience of learning how to copy the Bargue plates, without the benefit of a teacher. Actually, you don't need one. With a combination of the infromation here and in the book itself, you should be able to do fine on your own. Email me if you have any questions. Plate One The course starts out fairly simply with plate one.